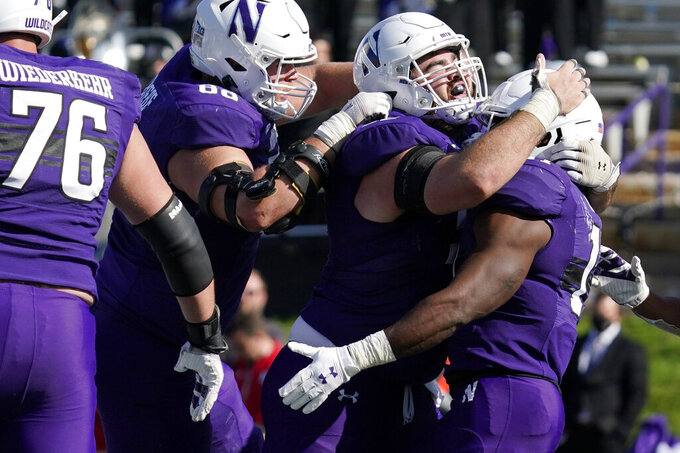 Northwestern running back Andrew Clair, right, celebrates with teammates after scoring a touchdown during the second half of an NCAA college football game against Rutgers in Evanston, Ill., Saturday, Oct. 16, 2021. Northwestern won 21-7. (AP Photo/Nam Y. Huh)

ANN ARBOR, Mich. (AP) — A.J. Henning isn’t worried about his Michigan teammates getting ahead of themselves.

The undefeated Wolverines have one piece of unfinished business before what could be one of the biggest showdowns in college football this season. No. 6 Michigan hosts Northwestern on Saturday prior to its annual game against in-state rival Michigan State.

“We’re not overlooking them at all,” said Henning, a wide receiver and punt returner. “They’re going to come in here and give us their best shot, so we’re going to take the necessary preparations to try to have a successful outcome.”

This year’s matchup with the Spartans could be extra special, since both squads will be undefeated if Michigan (6-0, 3-0 Big Ten) holds up its end of the bargain this weekend.

Coach Jim Harbaugh hasn’t detected any signs that his team has its sights set on next weekend’s visit to East Lansing. The Wolverines had a bye week after squeaking out a 32-29 win at Nebraska on Oct. 9.

“The team has been very locked in. Daily, weekly,” he said. “I think I’ve really continued to be pleased with how they attack every single day.”

Their last outing was a little more exciting than Harbaugh would care to see. The Wolverines trailed entering the fourth quarter and needed two Jake Moody field goals in the last three minutes to keep their record unblemished.

“We were flying around, making plays and having fun,” linebacker Bryce Gallagher said.

The Wildcats will be seeking their first road win this season and their first win over the Wolverines since 2008.

“We have to play cleaner than we have on the road this year,” Northwestern coach Pat Fitzgerald said. “We have not played very well on the road. This is by far probably the best team we’ve played all year to this point. It’s not even close, in my opinion, watching everybody on tape that we’ve prepared for. So this is going to be a huge challenge.”

The teams will compete for the newly-created George Jewett Trophy. He was the first Black football player at each school. Jewett played for Michigan during the 1890 and 1892 seasons, then left Michigan for Northwestern in 1893 to finish his medical degree. He played two seasons for the Wildcats.

The Wolverines have won their last six matchups with the Wildcats and 11 of the last 12 but they were far from dominant in recent meetings. In four of the last five games, the margin of victory has been eight points or less, and two of those games were decided in overtime.

The Wolverines’ offensive line has consistently opened holes for the running backs and kept the quarterbacks clean. It ranks No. 1 in the FBS by allowing just 13 tackles behind the line of scrimmage. They have only given up two sacks in the team’s six games, ranking second nationally.

Northwestern quarterback Ryan Hilinski appears to be settling in after opening the season in a backup role.

The South Carolina transfer went from throwing for 88 yards in a win over Ohio to 256 in a blowout loss at Nebraska to 267 against Rutgers in his three starts. He also matched a career high with two touchdown passes last week, including a 64-yard touchdown to Malik Washington

“I just think he’s grown every day and every rep,” Fitzgerald said. “I thought he played pretty clean. He got away with a couple throws that he won’t be able to get away with this week against the Wolverines’ defense.”

The Wildcats went from getting steamrolled by Nebraska for 657 yards to holding Rutgers to 222. The 657 yards by the Cornhuskers were the most against Northwestern since the 2005 team gave up a program-record 773 to Arizona State.

Fitzgerald credited improved play by the defensive line as well as better tackling by the linebackers.

By Stephen Hawkins 31 minutes ago
By Dan Gelston an hour ago
14 hrs ago
By Greg Beacham 15 hrs ago
By Gary B. Graves 16 hrs ago