No. 8 Michigan State looks to tighten defense vs. Maryland 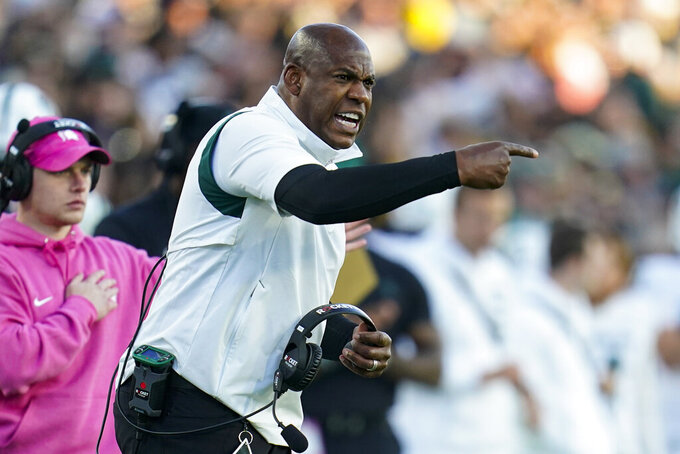 Coming off an exhilarating victory over rival Michigan, the Spartans unraveled defensively in a 40-29 loss at Purdue last weekend. They’ll try to bounce back when they host Maryland on Saturday.

“It was not really that much difference between what we saw on Saturday and what we’ve seen in previous games,” said Tucker, the Spartans’ second-year coach. “It’s just that we didn’t make enough plays to pull it out. It’s a total lack of execution -- missed tackles, focus -- it’s death by inches. All it takes is that one mistake, that one mental error, that one missed assignment, or whatever, to kill the play on offense, defense or special teams.”

The Spartans (8-1 overall, 5-1 Big Ten) dropped from No. 5 to No. 8 in the rankings. They’re tied for second place in the East Division with the Wolverines, one game behind Ohio State.

Michigan State has three regular-season games remaining, including a matchup with the Buckeyes on Nov. 20 and Penn State on Nov. 27. Tucker is eager to see how his team handles adversity.

“I believe these guys will respond well but we’ll find out,” he said. “We’ll need to be at our best as a coaching staff and our leaders need to step up. ... You have to be able to respond to a loss.”

“He’s one of those guys that, you better bring all your pads and all your friends when you tackle him, because he’s got great contact balance,” Maryland coach Michael Locksley said. “He’s the guy that we’ve got to try to take out of the game plan this week.”

Matt Coghlin has handled the Spartans’ placekicker duties since the 2017 season, so it was odd not to see him on the field last weekend.

Coghlin missed the loss at Purdue with an undisclosed injury and true freshman walk-on Stephen Rusnak took his place. Rusnak connected on three extra points and missed his lone try from 43 yards out.

Tucker wouldn't reveal Coghlin’s status for this week’s game. Coghlin holds the school record with 74 made field goals and has never missed an extra-point attempt.

Michigan State wide receiver Tre Mosley caught a touchdown in his second career game during the 2019 season. He didn’t score again until Saturday at Purdue when he hauled in two scoring passes from Payton Thorne.

An injury limited Mosley to four games last season and he’s been overshadowed by fellow wideouts Jayden Reed and Jalen Nailor this season. The sophomore had at least one reception in every game this fall until he came empty against Michigan on Oct. 30.

Mosley was thrust into a bigger role last week with Nailor sidelined by a right hand injury.

Maryland’s depth at receiver has been tested by season-ending injuries to Dontay Demus and Jeshaun Jones. In their absence, tight ends Chigoziem Okonkwo and Corey Dyches have had chances to shine.

Okonkwo has 32 catches for 262 yards and three touchdowns on the season. Dyches has 16 receptions for 165 yards and two TDs. Okonkwo had 12 catches for 85 yards in last weekend’s 31-14 loss to Penn State.

Quarterback Taulia Tagovailoa’s 41 completions last week against Penn State were the second-most in the history of the Maryland program. He is now 47 completions behind John Kaleo’s single-season record of 286 in 1992.

Tagovailoa has five 300-yard passing games this season, the most in the Big Ten and tied for the most in school history. This weekend, he faces a Michigan State team that has allowed by far the most yards passing in the conference.