No. 9 Clemson tries to solve offensive woes at NC State 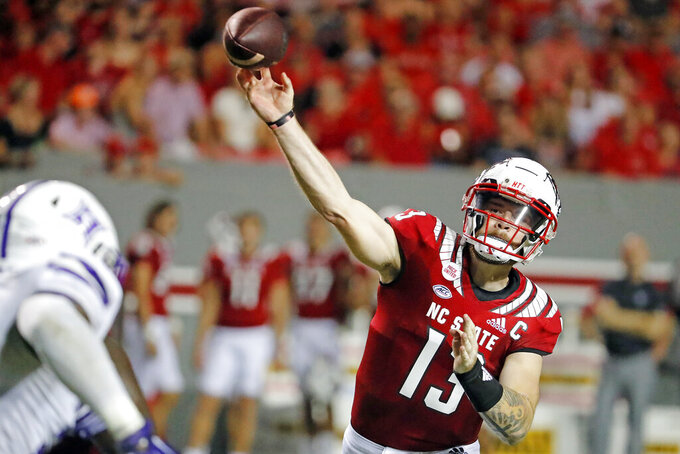 North Carolina State's Devin Leary (13) passes the ball against Furman during the first half of an NCAA college football game in Raleigh, N.C., Saturday, Sept. 18, 2021. (AP Photo/Karl B DeBlaker)

Ninth-ranked Clemson hasn't looked much like the high-scoring juggernaut of recent years. That either has the six-time reigning Atlantic Coast Conference champions as vulnerable as they’ve been in a long time or set to break loose for a big output.

The answer comes Saturday when the Tigers visit North Carolina State, the team picked as Clemson’s top challenger in the league’s Atlantic Division.

“We all know that’s a tough place to play,” Clemson coach Dabo Swinney said. “We’re going to have to play our best game and we’re a long way from playing our best game to this point. Hopefully, this will be the week.”

The Tigers (2-1, 1-0 ACC) have sputtered offensively after losing No. 1 overall NFL draft pick Trevor Lawrence at quarterback and two-time ACC player of the year Travis Etienne at running back.

The unit led by quarterback D.J. Uiagalelei failed to reach the end zone in the season-opening loss to No. 2 Georgia, then followed a 49-3 win against South Carolina State by surviving a 14-8 win against Georgia Tech. That’s a total of 17 points against Bowl Subdivision opponents for a team that averaged almost 44 points per game from 2018-20.

N.C. State (2-1) is playing its league opener with a largely veteran squad, though the Wolfpack’s defense has already lost all-ACC linebacker Payton Wilson and starting safety Cyrus Fagan to season-ending injuries. And while it looked sharp in overwhelming South Florida and Furman by a combined score of 90-7, N.C. State blew a chance at a marquee win with a loss at Mississippi State in Week 2.

The offense led by Devin Leary struggled in that game. That unit now faces a defense carrying the load for the Tigers, part of a big opportunity for the Wolfpack and ninth-year coach Dave Doeren.

“Sometimes you get too caught up in comparisons," Doeren said. "The bottom line is we want to be the best we can be here and to be the best N.C. State possible, we have to go out and not beat us, and play as hard as we can for each other and see where that puts us.”

Some other things to know about Saturday’s Clemson-N.C. State game:

Clemson's win against Georgia Tech improved Clemson to 53-3 against league opponents dating to the start of the 2015 season.

The Tigers split two games last year with Notre Dame, which gave up its football independence for one season due to the COVID-19 pandemic. Otherwise, the Tigers have gone nearly four years since losing to one of the league’s every-year football members (at Syracuse in October 2017 ).

N.C. State has lost eight straight and 15 of 16 meetings, though the Wolfpack has given the Tigers some of their toughest tussles during their reign.

The Tigers had to win a 56-41 shootout in Raleigh in 2015. A year later, the Wolfpack missed a short field goal for the win to end regulation in what turned into an overtime road loss to the eventual national champions.

Clemson has not allowed a touchdown this season, the first time that’s happened in program in 71 years. The only touchdown scored by an opponent was Georgia’s defensive score, an interception return of Uiagalelei for a TD. The Tigers' defense has surrendered just four field goals in three games.

Clemson freshman tailback Will Shipley blamed himself for the team’s close call against Georgia Tech. He said the fumble in the end zone after the defense had stopped Georgia Tech on fourth-and-goal was his and his alone, though Shipley was able to fall on the ball for a safety instead of letting the Yellow Jackets get to it for a chance to tie or win.

“That’s 100 percent on me. That’s a rookie mistake and I’m glad the outcome was what it was,” said Shipley, a North Carolina prep star recruited by N.C. State.

The neighboring-state programs didn’t play last year amid a reshuffled league slate due to the COVID-19 pandemic. That marked the first time they didn’t meet since 1970.

By Michael Marot 41 minutes ago
By Gary B. Graves an hour ago
By Aaron Beard 2 hrs ago
3 hrs ago
By Hank Kurz Jr. 4 hrs ago