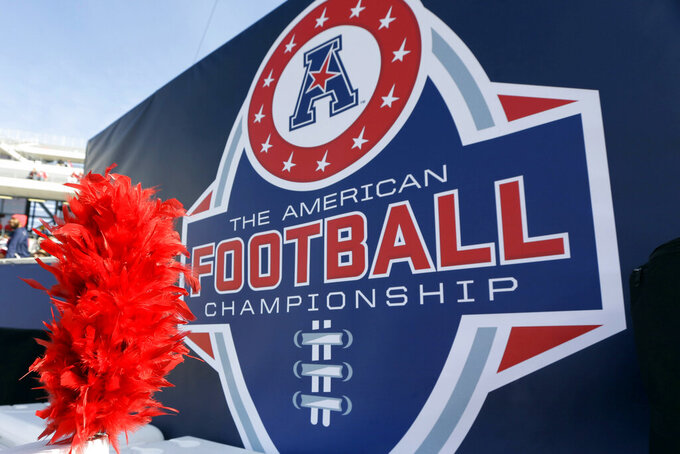 FILE - In this Dec. 5, 2015, file photo, the American Athletic Conference logo is displayed before during the championship NCAA college football game between Houston and Temple in Houston. Six schools from Conference USA — UAB, UTSA, Rice, North Texas, Charlotte and Florida Atlantic — have applied for membership with the AAC and are expected to be accepted by the end of the week, according to two people with knowledge of the process who spoke with The Associated Press, Wednesday, Oct. 20, 2021. (AP Photo/David J. Phillip, File)

Major college football is settling into a strange period with lame duck memberships and frayed allegiances that could last another season or even two as conferences sort out the latest shifts and turns of realignment.

The American Athletic Conference on Thursday became the latest to act in the trickle down effect from Texas and Oklahoma's announced move to the Southeastern Conference.

The American is adding UAB, UTSA, Rice, North Texas, Charlotte and Florida Atlantic to replace three schools that are leaving for the Big 12 Conference —- eventually.

"I think they will definitely take great advantage of the exposure and the platforms that are going to be provided by this conference," AAC Commissioner Mike Aresco said. “So we look forward, down the road, and we’re not certain when they’re going to come in yet. That’s still to be decided.”

Pinning down an ETA for the AAC's new additions is complicated because the conference doesn't realistically have room for the newcomers until the outgoing schools have left.

Those within the AAC believe 2023 is a realistic target for the transition to a 14-team conference after swiping six schools from Conference USA.

But it all starts with Texas and Oklahoma. The Longhorns and Sooners are contractually obligated to the Big 12 until July 2025. The SEC has made it clear that while it is looking forward to having Texas and OU on board, the league is also fine with waiting until then.

Breaking the contract would cost Texas and Oklahoma tens of millions of dollars in exit fees paid to the Big 12, but it is understood that everybody involved would benefit from not stringing out this broken relationship for three more seasons.

The Big 12, after all, already has replacements lined up. The conference in September announced BYU and three AAC powers, Cincinnati, Houston and UCF, would be joining —- eventually.

BYU, an independent in football with other sports in the West Coast Conference, is preparing to join the Big 12 in 2023. The three American schools are required to give the conference 27 months' notice and pay $10 million exit fees. The Big 12 said it expected them to join by no later than summer of 2024. And it left the door open to add more schools down the road.

“We’re living in a very fast-changing athletic environment, and we will be at 14 for a while, we will drop back to 12, and as there are targets of opportunity or as there are situations that dictate that we change composition, we’ll be prepared to do those things," Big 12 Commissioner Bob Bowlsby said in September.

Aresco conceded growing to 14 was a way for a conference that has become a feeder league for the Power Five to be prepared for future poaching.

“We decided that there was strength in numbers,” Aresco said. “We also looked around and said you know there are some schools that we might be interested in later on, why not, you know, think about taking them now?”

C-USA and the Sun Belt are next up in realignment. With only eight remaining members, Conference USA needs to both protect its assets and add on. A request for comment from Conference USA Commissioner Judy MacLeod was not immediately returned.

The Sun Belt continues to publicly say it will explore its options, but Commissioner Keith Gill told AP the conference is feeling no pressure to act now that the American has made its move.

“There is no timetable,” Gill said.

He declined to comment on reports the 10-football member Sun Belt is eyeing some of C-USA's remaining schools such as Southern Mississippi, Marshall and Old Dominion along with FCS powerhouse James Madison.

No matter. The map is unlikely to be redrawn for 2022, which means another full season of potentially uncomfortable moments that have already started to play out.

Earlier this week, Bowlsby told The Austin (Texas) American-Statesman newspaper Oklahoma and Texas secretly planning to leave the Big 12 felt like a “personal betrayal.” He added the Longhorns' recent issues in football had nothing to do with the conference in which they play.

No. 3 Oklahoma is on target to play in yet another Big 12 title game in December. A seventh straight conference championship for the Sooners could make for an awkward trophy presentation with the commissioner at AT&T Stadium in Arlington, Texas.

Same goes in the American, where No. 2 Cincinnati is positioned be the first team from outside the Power Five to make a serious run at the College Football Playoff.

Aresco did not attend Cincinnati's game against Notre Dame earlier this month, but is not about to disown the unbeaten Bearcats.

“Cincinnati if, you know, we don’t know what’s gonna happen, but if they make the playoffs or they do something remarkable, they will have done it in the American Athletic Conference,” he said.