UCLA has high expectations in Kelly's 4th season in charge 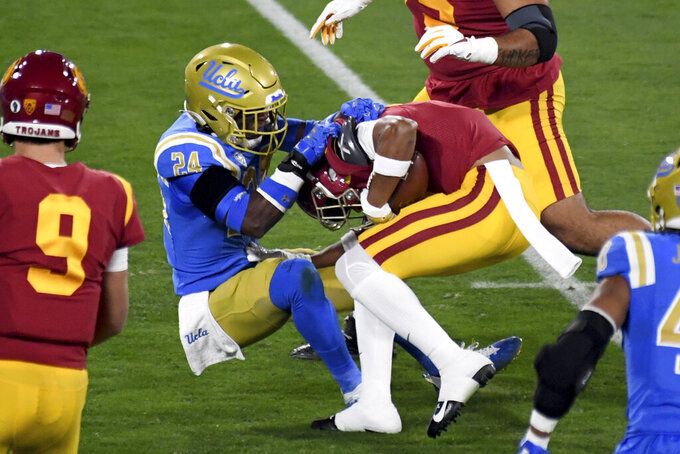 FILE - In this Dec. 12, 2020, file photo, UCLA defensive back Qwuantrezz Knight (24) tackles Southern California wide receiver Gary Bryant Jr. (1) in the first half of an NCAA college football game, in Pasadena, Calif. "People are expecting big things out of the Bruins," Knight said. "We just want to elevate all around and be the best that we can be. We are going to attack the season like that." (Keith Birmingham/The Orange County Register via AP, File)/The Orange County Register via AP)

LOS ANGELES (AP) — It's now or never as Chip Kelly enters his fourth season at UCLA.

Kelly has one of the more experienced squads in the Pac-12 Conference with 19 starters returning. That's quite a change from 2018 and '19 when the Bruins had one of the youngest squads in the nation.

Upperclassmen now make up 38% of the Bruins' roster. Only Stanford (50%) and Southern California (46%) have a higher percentage.

“It’s comforting. It took us a while to get to this point,” Kelly said. “Our classes are now a little more evenly distributed. We have a group of juniors and seniors that have played a lot of football. We’re going to have to rely on that experience.”

No one symbolizes the trial by fire during Kelly's tenure more than quarterback Dorian Thompson-Robinson. The senior was thrown into the fire quickly due to injuries and started what was then just his second collegiate game — at Oklahoma in 2018.

Thompson-Robinson has gone on to start 24 of the 26 games he has played. Last season he completed a career-high 65.2% of his passes with 12 touchdowns and four interceptions.

“Just seeing the growth, We were kids out there playing when we were freshmen. We’re grown men now,” Thompson-Robinson said. “I’m excited. It is a complete team now.”

The Bruins showed improvement last year. Even though they were 3-4, the losses were by a combined 15 points. The expectation this season is that they can notch their first winning season since 2015.

Seven or more wins is also what Kelly might need to save his job. Kelly came to Westwood with much fanfare in December 2017 but is 10-21 in three seasons. Athletic director Martin Jarmond is beginning his second year and Kelly will have only one year remaining on his contract at the end of this season.

“People are expecting big things out of the Bruins,” defensive back Qwuantrezz Knight said. “We just want to elevate all around and be the best that we can be. We are going to attack the season like that.”

Brittain Brown is expected to be the starting running back after Demetric Felton’s graduation. Brown joined the Bruins as a grad transfer from Duke last season and averaged 6.6 yards per carry. He got the start in last year’s season finale against Stanford and rushed for 219 yards.

Also expected to get plenty of carries is Michigan transfer Zach Charbonnet, who had 11 rushing touchdowns as a freshman in 2019.

The receiver group is also deep. Kyle Phillips — whose 38 catches were second in the conference last season — was the Bruins' only first-team selection to the all-preseason team. Tight end Greg Dulcich averaged 19.9 yards per catch and had five touchdowns last season.

The Bruins return all but one starter on a defense that was among the nation's most improved last season. The unit had 48 tackles for loss, nine interceptions and averaged 3.3 sacks per game.

Even though the unit was stout against the run (the 3.6 yards per carry were 25th in the nation), they allowed 274.1 passing yards per game, which was the seventh-most among Power Five teams.

“The guys understand the things we got to do better at,” assistant head coach Brian Norwood said. “A lot of that is just little things. It's not so much at times a guy running free as much as it is finishing at the point of attack."

The Bruins offensive line has all five starters back and it could be one of their best in years. Left tackle Sean Rhyan — who was the highest-ranked recruit in Kelly's 2018 early-signing class — could find himself being a highly rated draft prospect with another solid season.

The backup quarterback spot. Chase Griffin nearly led the Bruins to a win at Oregon but there is increased competition after Ethan Garbers transferred from Washington.