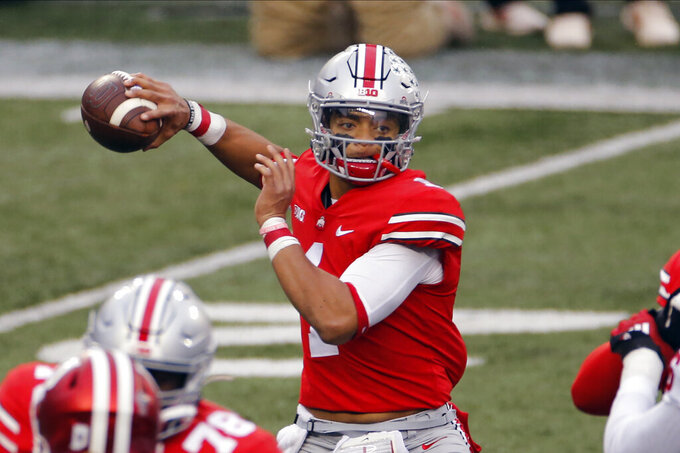 Alabama and Ohio State advanced to the championship game in part because their best players delivered huge performances in their respective semifinals.

Alabama and Ohio State will face off Monday in suburban Miami in the College Football Playoff championship game, providing an opportune time to unveil The Associated Press all-bowl team. Since some teams go with 4-3 defenses and other prefer 3-4 schemes, the rundown includes four defensive linemen and four linebackers.

Justin Fields, Ohio State (Sugar): Fields threw a Sugar Bowl-record six touchdown passes and accumulated 385 yards passing. He did all that despite taking a big hit to his side in the first half, causing him to spend time in the medical tent.

Camerun Peoples, Appalachian State (Myrtle Beach): Peoples had 22 carries for a school-record 317 yards – the most by any player in any bowl game in history – as Appalachian State defeated North Texas 56-28. Peoples also ran for five touchdowns to tie the all-time bowl record.

Bijan Robinson, Texas (Alamo): Robinson scored three touchdowns in No. 20 Texas’ 55-23 win over Colorado. He had 10 carries for 183 yards and a touchdown. He also had two TD catches.

Dylan Parham, Memphis (Montgomery): Pro Football Focus handed out game ratings for every individual offensive lineman who played in a bowl and gave Parham the second-highest grade (89.8) of all of them. Memphis didn’t allow any sacks in a 25-10 victory over Florida Atlantic.

Erik Swenson, Oklahoma (Cotton): Swenson got the highest Pro Football Focus grade (90.3) of any offensive lineman for his bowl performance. Swenson helped No. 8 Oklahoma gain 684 total yards in a 55-20 blowout of No. 10 Florida.

Elijah James, Liberty (Cure): James started at defensive tackle, produced a couple of tackles and blocked a 42-yard field-goal attempt in overtime to clinch No. 23 Liberty’s 37-34 triumph over No. 9 Coastal Carolina.

DeMarvin Leal, Texas A&M (Orange): Leal had seven tackles and made one of those stops behind the line of scrimmage as No. 5 Texas A&M defeated No. 14 North Carolina 41-27.

Azeez Ojulari, Georgia (Peach): Ojulari forced two fumbles and collected three sacks as No. 11 Georgia rallied to beat No. 6 Cincinnati 24-21. Ojulari’s third sack produced a safety on the final play of the game.

Jack Sanborn, Wisconsin (Duke’s Mayo): Sanborn recorded 11 tackles – two for loss – and also had one of Wisconsin’s four interceptions in the Badgers’ 42-28 victory over Wake Forest.

Emmanuel Forbes, Mississippi State (Armed Forces): Forbes delivered his fifth interception of the season and returned it 90-yards for a touchdown to help the Bulldogs beat Tulsa 28-26.

Antavious Lane, Georgia State (Lending Tree): Lane had five tackles and also picked off a pass that led to a touchdown drive for Georgia State in its 39-21 victory over Western Kentucky. It was the first interception Tyrrell Pigrome had thrown all season.

Max Duffy, Kentucky (Gator): Duffy landed three of his five punts inside No. 24 North Carolina State’s 20-yard line. On one of them, Duffy briefly held the ball and made a move around a North Carolina State player to prevent a probable blocked punt.