AP Top 25 Reality Check: Will winning keep Clemson at No. 1? 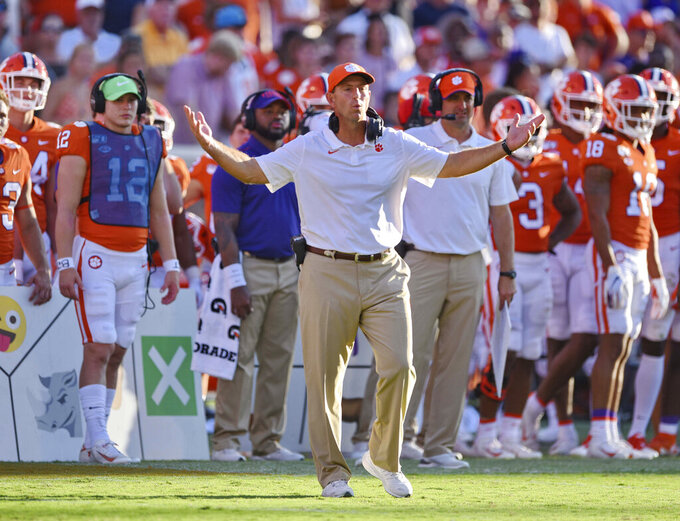 Clemson head coach Dabo Swinney reacts to a call during the second half of an NCAA college football game against Texas A&M Saturday, Sept. 7, 2019, in Clemson, S.C. (AP Photo/Richard Shiro)

Clemson could lose before the College Football Playoff. It is possible.

The top-ranked Tigers will play 10 more regular-season games, and presumably the Atlantic Coast Conference championship game. Anything can happen in sports. Injuries. An outbreak of fumblitis. Bad weather.

After dispatching Texas A&M without much of a challenge, Clemson has no ranked teams left on its schedule. Syracuse was supposed to be second-best in Clemson's division. The Orange just gave up 63 to Maryland before hosting Clemson on Saturday. Florida State needed overtime to beat Louisiana-Monroe. From here on out, Clemson will not only be a double-digit favorite, but could very well be a 20-point favorite in every game.

The question then becomes can Clemson stay No. 1 even if it keeps winning? Will anything less than domination persuade AP Top 25 voters to keep Clemson on top? The Tigers received 54 of 62 first-place votes in the Top 25 presented by Regions Banks.

Teams losing the No. 1 ranking while winning games is not uncommon in poll history. It has happened 27 times, just since 1980, though not at all since it happened to Ohio State in early November 2015. Clemson could snap that drought with a sleepy performance over the next two and half months.

Reality check: Complacency and human nature will be the toughest opponent for Trevor Lawrence and Co.

Reality check: A true road game should provide a little more insight on the Tide, which has not been tested yet, but has earned the benefit of the doubt in 10 years of dominance.

Next: vs. Arkansas State

Reality check: The Bulldogs also have not yet been tested, but have not quite earned the Clemson and Alabama treatment.

Next: vs. Northwestern State

Reality check: Through two weeks, QB Joe Burrow and the new Flying Tigers have been the most impressive team in country.

Reality check: The Sooners are averaging a shade under 11 yards per play. Yes, the competition, but there are lots of teams (Alabama, Georgia, Penn State) that have started the season against overmatched opponents and none are even close to that.

Reality check: The Bearcats are not Big Ten-caliber, but the Buckeyes made them look like second-tier MAC and that's not something to just shrug off.

Next: vs. New Mexico

Reality check: The Irish have crept forward in the polls without doing much. It happens. Teams are not ranked in a vacuum, but with Georgia looming this could be a high point.

Reality check: The euphoria of the Oregon comeback has given way to the reality that QB Bo Nix and the offense has a fair amount of work to do.

Reality check: The SEC East seems to be crumbling, with the Gators looking like the only real threat to Georgia. But Florida has its own injury concerns with star CB CJ Henderson (left leg) and WR Kadarius Toney (left arm).

Reality check: Nobody will care about Michigan's follies against Army if the Wolverines start winning Big Ten games. But at this point they're going to have to prove it was an anomaly.

Next: vs. Idaho State

Reality check: The Utes had a slack half against Northern Illinois, but not much to worry about.

Reality check: Voters tend to default to bumping teams down when they lose, even if only a little bit after a quality loss. At this point in the season, the Longhorns probably deserved to move up after the LSU game.

Reality check: Not being able to run the ball against Buffalo is concerning for the Nittany Lions, who are still looking for a go-to back.

Reality check: Nothing quite seems real when you have outscored your opponents 110-0. Among the absurd stats: Wisconsin is the only FBS team to have not allowed a play of at least 20 yards.

Reality check: Compared to Stanford and Washington, the Ducks' season is off to great start.

Reality check: At this point, it's probably safe to say Kellen Mond is always going to be a player capable of being both very good and very bad.

Reality check: Of course, the Cardinal come limping into Orlando with injuries and off a loss. The Knights never can catch a break with their opponents.

Next: vs. Arizona State.

Reality check: The Spartans found some offense and maybe a legit star running back in freshman Elijah Collins, which is reason for celebration even if it was against Western Michigan.

Reality check: The Cyclones slipped out of the rankings, denying the rivalry its first matchup of ranked teams. But not ESPN's "College GameDay" in Ames for the first time.

Next: at Houston, Friday

Reality check: The Cougars' overwhelming 2-0 start (combined 117-24) is against even softer competition than Wisconsin's.

Next: vs. Portland State.

Reality check: A week later, beating Florida State in Tallahassee doesn't look like that big of a deal. But the Marshall game was probably a better performance than the score indicated for the Broncos.

Reality check: Chris Petersen's offense gets credit for creativity going back to his Boise State days, but maybe it could use some of that modernization Michigan is searching for, too.

Reality check: The Trojans have a developing situation with QB Kedon Slovis. It's a small sample size but wouldn't it be something if a three-star freshman saved coach Clay Helton's job?

Next: vs. Florida State

Reality check: It was tempting to be skeptical of the Cavaliers being tabbed the ACC Atlantic favorites, but they have justified it out of the gate.

Instead of Washington how about California, which just beat the Huskies in Seattle.