Baylor focused on bowl for its seniors, not keeping TCU out 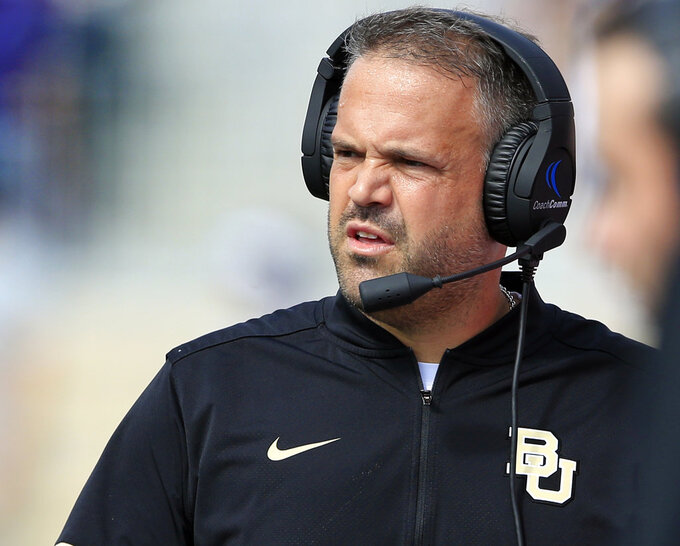 FILE - In this Sept. 30, 2017, file photo, Baylor head coach Matt Rhule watches from the sideline during the first half of an NCAA college football game against Kansas State, in Manhattan, Kan. Baylor coach Matt Rhule is more interested in what his team and the seniors who stuck around can accomplish, and not what the Bears could do to Big 12 rival TCU in the process. (AP Photo/Orlin Wagner, File)

WACO, Texas (AP) — Baylor coach Matt Rhule is more interested in what his team and the seniors who stuck around can accomplish, and not what the Bears could do to Big 12 rival TCU in the process.

The Bears (5-5, 3-4 Big 12) can get bowl eligible with a win Saturday in the home finale for 10 fifth-year seniors who remained through a sexual assault scandal that rocked the school more than two years ago, and led to only one win in Rhule's debut last season. They host the Horned Frogs (4-6, 2-5), who have to win their last two games to get to a bowl.

"Probably no group of seniors has ever been through more than they've been through," Rhule said. "My whole focus with our team this week is going to be about sending the seniors out on senior day the right way, and really send them out with the best home record. ... This is a special group to me, and I'd love to have a chance to play one more game with them."

Baylor will honor 20 seniors overall before the game. That includes the fifth-year guys and three players who came into the program from other schools as graduate transfers.

Receiver Chris Platt, nose tackle Ira Lewis and the other fifth-year seniors arrived in Waco at the peak of the program's on-field success — after the Bears' first Big 12 championship in 2013, and then a share of the title in 2014 in their first season on campus. Eight of the fifth-year seniors already have degrees and could have gone elsewhere this season as graduate transfers. They have been part of two bowl wins, during a 10-win 2015 season and the Cactus Bowl in 2016 that capped a 7-6 record under interim coach Jim Grobe in the immediate wake of the scandal.

TCU played in the Big 12 title game last year after ending that regular season by beating the Bears for the third year in a row. Now the Frogs have to win out — at Baylor and their home finale against Oklahoma State — or miss a bowl for only the third time in coach Gary Patterson's 18 seasons as head coach.

"It is a must-win game because we do want to win a bowl game," tight end Cole Novak said. "That is the end game, and we're going to do everything we can in order to make that happen."

But the injury-plagued Frogs, with 36 players missing much or all of the season, are coming off their most lopsided loss under Patterson — 47-10 at No. 7 West Virginia last week. The only times they missed bowls under GP were 2004 and 2013, but rebounded with at least 10 wins the following season.

"You want to have some urgency about doing it, but I don't think you're panicking. If you're not careful, you cause a lot more problems that way," Patterson said. "When you're struggling, what you need to do is worry about you. You don't worry about your opponent."

Some other things to know about the 113-game series that dates back to 1899, and is the most-played for both schools:

FROGS ON THE RIVER BANK

TCU has played twice in Baylor's campus stadium on the banks of the Brazos River. There was that epic 2014 game when Baylor scored 24 points in the final 11 minutes for a 61-58 win that eventually left the Bears and Frogs as Big 12 co-champions — and both out of the initial four-team College Football Playoff. TCU won 62-22 there in 2016 and has a 54-52-7 series lead.

Baylor DE Greg Roberts will miss the first half after he was ejected from the second half of last week's loss at Iowa State for reaching over an official to throw a punch at running back David Montgomery. Bears starting quarterback Charlie Brewer won't have to serve any further penalty after his automatic ejection. He got his second unsportsmanlike conduct penalty in the fourth quarter for saying something to an official — every player had been assessed an unsportsmanlike conduct penalty after the earlier melee.

"Well, I think both of us, probably the rivalry's a little bit downplayed," Patterson said. "It's a lot easier to do that when both teams are winning a lot, and this season both of us we're sitting around .500, so it's a lit bit more numb."

Baylor went into this season with an eight-game home losing streak. The Bears are 4-1 this year at McLane Stadium, and a win over TCU would give them their best home record since 6-0 in the stadium's inaugural season in 2014.