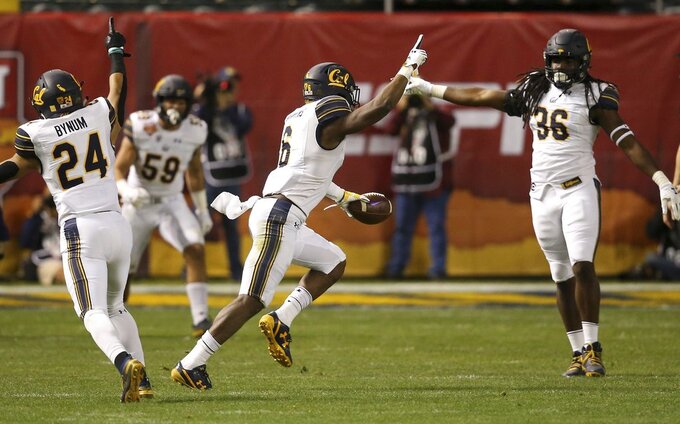 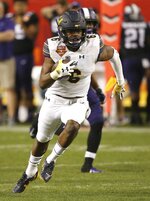 PHOENIX (AP) — Jaylinn Hawkins wasn't on the makeshift stage when his name was announced as the Cheez-It Bowl Defensive Most Valuable Player. He'd already left the field with his Cal teammates after TCU's 10-7 overtime win.

Hawkins could only shake his head at the postgame news conference podium while Golden Bears coach Justin Wilcox was asked about what didn't go right. But Hawkins got his well-deserved moment in the spotlight when a bowl official stepped in and presented the trophy for Defensive MVP to Hawkins.

"We don't often give an MVP award to a player whose team didn't win the game," said Steve Leach, Fiesta Bowl-Cheez-It Bowl chairman, in an impromptu introduction. "But you have to this time."

Hawkins, a junior safety from Buena Park, California, set a bowl record for most interceptions with three. In a game that saw TCU and Cal combine for a record nine interceptions, Cal had four and Hawkins was undeniably the biggest ball hawk. He couldn't be denied the award even though the Bears' defense couldn't keep the Horned Frogs from tying and eventually winning the game.

"It was just my defense," Hawkins said. "Everybody communicating and being on point. That's how big plays happen. We all played hard together and we're a family."

Hawkins was recruited to Cal as more of a wide receiver with the ability to play on the defensive side of the ball. But when the Bears needed help on defense during his redshirt freshman season, Hawkins was moved permanently to safety.

The switch paid off. Hawkins became a regular starter as a sophomore in 2017, and this season picked off three passes in Cal's first two games.

Wednesday night, Hawkins seemed to have TCU quarterback Grayson Muehlstein figured out. He added six total tackles and helped hold the Horned Frogs to 28 passing yards for the game.

Hawkins' heroics went for naught, however, as TCU wore down the Bears with a running game that got stronger despite the Horned Frogs' inability to complete passes consistently. And even when Cal got a stop on fourth down with 3:33 left in regulation time — with Hawkins on the field leading the celebration — TCU ran with purpose.

A missed TCU field goal as regulation time expired was another win for the Cal defense, but the Horned Frogs used eight running plays to get in position for the winning field goal in overtime.