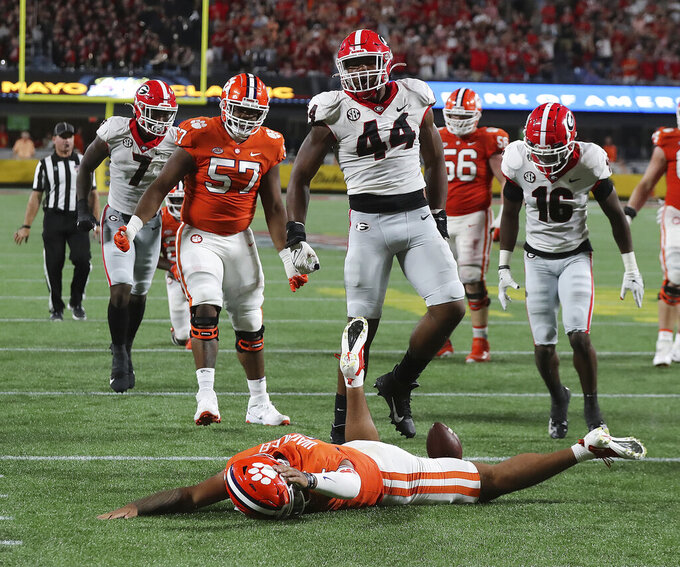 COLUMBIA, S.C. (AP) — One thing is certain for Clemson offensive coordinator Tony Elliott — he has to find a way to improve the offense to stay on top in the Atlantic Coast Conference. And the clock is ticking for the third-ranked Tigers.

Clemson failed to score a touchdown in the 10-3 loss to fifth-ranked Georgia, something the Tigers hadn't experienced since falling to Alabama 24-6 in the semifinals of the College Football Playoffs after the 2017 season.

That was before quarterback Trevor Lawrence and tailback Travis Etienne were in full control of an explosive attack the past three seasons. With both ACC players of the year off to the NFL, Clemson came up way short of the level Elliott knows they must reach to return to the CFP.

Elliott has received some unpleasant mail and texts from Clemson fans angered by the showing.

“Yes, there’s a feeling of hurt, but we can’t wallow in our pity right now,” Elliott said. "We got to change our perspective.”

That starts with improved play from new starting quarterback D.J. Uiagalelei, who was sacked seven times by the Bulldogs. Uiagalelei said the reason for the loss was simple: “I just didn't play well,” he said Monday.

Uiagalelei finished 19 of 37 passing for 178 yards and a costly pick-six interception right before halftime that proved the difference.

There were plenty of others to share the blame on offense. The offensive line struggled to hold out Georgia's pass rushers or generate holes for the Tigers' tailbacks, who managed just 2 yards on 23 attempts.

Elliott thought his team played tough and fierce but made some mistakes in technique.

“You are going to lose some one-on-one matchups,” Elliott said. “The biggest thing we got to realize offensively is just focusing on details, the little things, and everybody being on the same page.”

If the Tigers get there, that's bad news for South Carolina State of the Football Championship Subdivision. The Bulldogs of the Mid-Eastern Athletic Conference have lost the four games they've played against Clemson by a combined score of 238-20. The team's last meeting came in 2016, a 59-0 Tigers victory.

“It's all about us,” Elliott said. “We're not going to get anywhere overlooking anybody.”

Clemson coach Dabo Swinney saw hopeful signs in the second half and on Sunday that Uiagalelei was moving forward. Despite his first half struggles, the Tigers drove for a field goal to stay within a score of tying.

Then on Sunday the sophomore passer was the first one in the team's facility watching tape. “That is what you want to see,” Swinney said. “It would have been easy for him to get worse.”

Swinney acknowledged that he wished the Tigers had stayed with the run more than relying on Uiagalelei's arm to get them down field.

Kobe Pace, a sophomore, opened the game at tailback, while Lyn-J Dixon, who had been Etienne's main backup the past three seasons, got only one carry for 10 yards — which turned out to be longest for a Clemson running back in the loss.

Swinney said Georgia's defense will make even the most talented run game look bad at times. Still, “with D.J. not being settled in, we didn't do a good job in sticking with the run and hanging in there,” Swinney said.

Uiagalelei said it's a different college experience for him after the Georgia loss. Yes, he also lost as a starter at Notre Dame, 47-40 in overtime last fall, but he threw for 439 yards — the most ever against the Irish.

In this one, Uiagalelei spent time on the ground or scrambling away from defenders.

He's heard the early complaints on social media but chooses to trust in the better days he knows are ahead when Clemson gets cranked up.