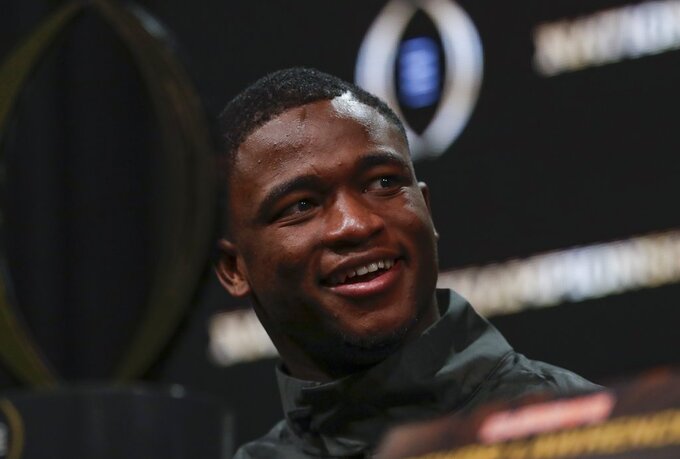 After leading Clemson to its second national title in three years, the coach is eager to get started on the next one.

Swinney will be back in the office Friday — meeting with players, going over the schedule for offseason workouts, establishing the tone for another championship run.

That may sound like a perpetual grind to some folks.

"I get motivated by winning," he said, his voice rising with excitement. "I don't have to lose to get motivated. Man, I'm as motivated as I've ever been to get back to work with next year's team and kind of figure it out. It's going to be fun because we've got a lot of unbelievable seniors that are moving on, but we've got some dynamic pieces."

The Tigers completed one of the greatest seasons in college football — the best ever, in the estimation of Swinney and his players — with a stunning 44-16 blowout of mighty Alabama in the national championship game Monday night.

Clemson became the first team in major-college history to finish 15-0, totally dominating the reigning champion, a squad that spent all season atop The Associated Press rankings.

Swinney joined some very select company, becoming only the 19th coach to win multiple titles in the AP poll era, which began in 1936.

While he scoffed at the idea of using the D-word — "We're a long way from a dynasty" — there is no denying that Clemson has gained equal billing with Nick Saban's Crimson Tide in any discussion of college football's most dominant programs.

The Tigers are 55-4 over the last four seasons — the same record as Alabama. Those two teams have divvied up the national titles, with three of their meetings coming in the championship game. The only exception was last season, when Alabama knocked off Clemson in the Sugar Bowl semifinal before beating Georgia for the crown.

"We're a great program. There's no doubt about that," Swinney said at a Tuesday morning news conference, sitting alongside his freshman sensation, quarterback Trevor Lawrence. "We're incredibly consistent in every area of our program. That's what I'm more proud of than anything, just the consistency."

Clemson will almost certainly begin the 2019 season ranked No. 1 and no worse than a co-favorite with the Crimson Tide to win another national title.

The offense, in particular, shouldn't miss a beat.

Lawrence will return for his first full season as the starter, having shredded Alabama through the air for 347 yards and three touchdowns. Top running back Travis Etienne, who scored two TDs in the title game, is back along with several starters from an offensive line that had its way against the Tide. And then there's the receiving corps, which will be led by sophomore-to-be Justyn Ross (six catches, 153 yards, one TD vs. the Tide) and rising junior Tee Higgins (three catches, 81 yards, a TD).

"I definitely made the right choice coming to Clemson," Lawrence said. "Anyone out there that has any doubt about Clemson and what they say, it's all true. Just a real family — the way we play for each other, the way these coaches love the players. Just everyone is special."

Clemson will have some major losses to address on the defensive side. Pass rusher Clelin Ferrell, tackle Dexter Lawrence, middle linebacker Tre Lamar and cornerback Trayvon Mullen are candidates to leave a year early for the NFL draft. Tackle Christina Wilkins, end Austin Bryant and linebacker Kendall Joseph have wrapped up their college careers.

Youngsters such as Xavier Thomas, K.J. Henry and Justin Mascoll are ready to step in. The next group of stellar recruits has already started moving into the dorms.

"Y'all don't have any idea who they are right now," Swinney said, "but this time next year everybody is going to know who they are. That's the fun part about what I do. We get to start over every year and plug guys in and let them go play."

"Oh, man, I'm excited about it," Swinney said. "It's always a fun meeting for me to kind of reset the room, if you will, and kind of paint a picture of what this new journey is going to look like and what we've got to do. Every year is a new challenge, and you don't carry anything over."

Well, nothing except the standard that Clemson has established.

Anything less than a championship just won't do.

"We've got twins now," Ferrell quipped, referring to those two titles. "But we want a family of 12."

And those who griped about being tired of watching every season come down to the same two teams? Well, better get used to it.

Swinney, for one, is already looking forward to that next Clemson-Alabama showdown.

He hopes it comes a year from now. In New Orleans. At the 2020 national championship game.

That was the message Swinney delivered to Saban when the two coaches met at the center of Levi's Stadium late Monday night.

"I just told him, 'See you next year,'" the Clemson coach said, breaking into a big grin. "I don't think they're going to go anywhere. They'll be back."