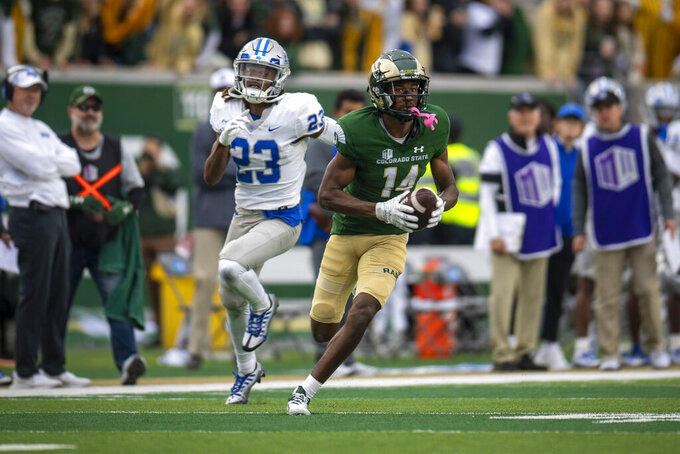 Colorado State's Troy Horton runs the ball in for a touchdown against Middle Tennessee State in an NCAA college football game at in Fort Collins, Colo., Saturday, Sept. 10, 2022. (Jon Austria/The Coloradoan via AP)

Line: Washington State by 16 1/2, according to FanDuel Sportsbook

Washington State is coming off an impressive 17-14 nonconference win at Wisconsin that knocked the Badgers out of the Top 25. “We believed we could do it,” coach Jake Dickert said Monday. “This wasn’t some upset of a lifetime.” Washington State will close its non-conference schedule against the Rams, who are struggling under new coach Jay Norvell. A victory might lift the Cougars into the Top 25 for the first time since 2019.

Colorado State is trying to break a seven-game losing streak dating to last season. The Rams fell into a 34-point deficit in the third quarter at home against Middle Tennessee State last week, and ultimately lost 34-19. The Rams suffered a 51-7 loss at Michigan in the season opener.

Washington State’s defense, which limited big plays and contained Wisconsin’s running game, against a short-handed Colorado State offensive line. The Rams have given up 16 sacks in two games, by far the most in the nation. They lost one of their starting tackles to a season-ending injury during practice last week. Colorado State freshman quarterback Clay Millen could be in for a rough day.

Colorado State: The Rams, who won just three games last season, do not have an effective running game. When Millen is given time to throw, his best option is receiver Tory Horton. It’s uncertain whether WSU’s secondary will be playing at full health this weekend.

Washington State: QB Cameron Ward, a transfer from Incarnate Word, is looking to improve his downfield passing and put more points on the board. Running back Nakia Watson scored two touchdowns against Wisconsin.

First-year WSU defensive coordinator Brian Ward was the DC at Nevada for the past two years under head coach Jay Norvell, who was hired to lead the Rams in December ... Seven players followed Norvell this offseason, transferring to CSU out of Nevada ... With a win, Dickert can become the ninth head coach in WSU history to start his first full season 3-0, and the first since Mike Price in 1989 ... Washington State kick returner Renard Bell and offensive lineman Jarrett Kingston each earned Pac-12 Conference Player of the Week awards following the win at Wisconsin ... Against Wisconsin, WSU logged six tackles for loss in the run game ... Billy Riviere caught a pass in the second quarter, becoming the first WSU tight end to record a catch since 2011. The Cougars did not use tight ends for a decade ... WSU cornerback Derrick Langford Jr., safety Jordan Lee and linebacker Travion Brown are questionable to play Saturday. Dickert said they will be game-time decisions.