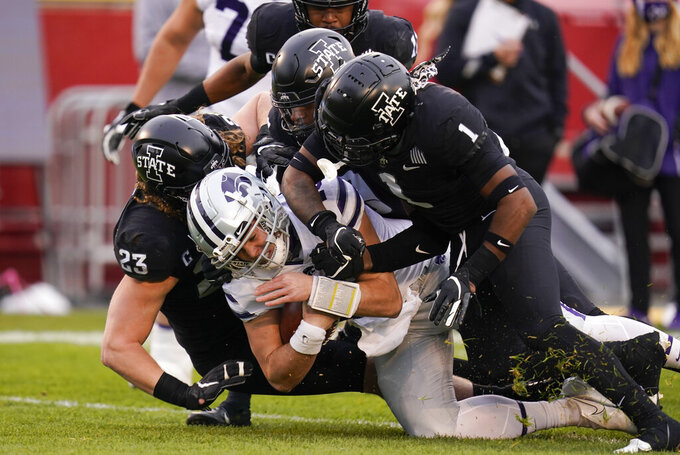 Defenses are helping carve a path toward the Big 12 championship game.

The two current frontrunners, No. 15 Iowa State and No. 14 Oklahoma, have stood out recently by what they've done to limit opposing offenses.

The first-place Cyclones held Kansas State to nine pass completions and 149 total yards in a 45-0 victory over the Wildcats last week. Second-place Oklahoma has allowed a total of two touchdowns and registered 13 sacks in its last two games.

And it's not just them. While the Big 12 historically is known for its high-scoring offenses, there is evidence that top to bottom the defenses are starting to push back.

Big 12 defenses are holding opposing offenses to 377 yards per game this season, the lowest among the Power 5 conferences, according to the league. And the Big 12's combined average of 28.3 points allowed is the second lowest.

“No doubt, it’s been an impressive year for the league defensively," Oklahoma coach Lincoln Riley said. "There’s a lot of really quality defenses, and I wouldn’t disagree if you said maybe more than in some years past.”

TCU coach Gary Patterson said nowadays what works well on defense for one team tends to get copied by others.

“Everybody mimics,” he said. “If something’s being successful, then they clone it, and there’s a lot of people that have gotten where they’re cloning things that are being successful.”

At Iowa State, success starts in the middle. Linebacker Mike Rose is second in the Big 12 in total tackles with 63 and he leads the conference with four interceptions. Greg Eisworth, a two-time all-Big 12 first team selection, anchors the secondary.

Iowa State defensive end Will McDonald is tied with Oklahoma linebacker Nik Bonitto for the league lead with 6.5 sacks, while Cyclones defensive end JaQuan Bailey has six sacks and is second in the league with 12 tackles for loss.

Texas coach Tom Herman, who was Iowa State's offensive coordinator from 2009-11, said overall this is the best Cyclones team he's seen “in a long, long time.”

“They've got great players up front on defense," Herman said. "That side of the ball is so talented and very cohesive, well coached.”

Despite using a half-dozen different starting combinations on its defensive line this season, Oklahoma is the only Big 12 team allowing fewer than 100 rushing yards per game.

Defensive end Ronnie Perkins had two sacks last week as Oklahoma limited Oklahoma State to a season-low 246 yards and kept the Cowboys off the scoreboard in the second half. Perkins has 12 tackles in three games since returning from suspension.

“I think their front four is imposing,” said West Virginia coach Neal Brown. “They’re as good, if probably the best, front four in our league. Ronnie Perkins on Saturday night played at an elite level. Defensively, the success they’ve had starts there.”

Brown will put up a pretty good defense of his own against the Sooners.

West Virginia has the nation's fourth-best pass defense at 162 yards per game and has allowed the fewest touchdowns in the league at 17, including three over the last three games.

West Virginia's defense has thrived despite parting ways with defensive coordinator Vic Koenning in July after a player alleged Koenning made a series of insensitive remarks. Koenning’s duties were then doled out among several defensive assistants.

The Mountaineers got an instant infusion of talent in a pair of graduate transfers — linebacker and league tackles leader Tony Fields and cornerback Alonzo Addae — along with the steady play of the defensive line and the emergence of Tykee Smith, a sophomore who plays a hybrid outside linebacker-defensive back position.

Despite the defense's lofty status, the Mountaineers have yet to play two of the top scoring teams in Oklahoma and at Iowa State.

“A huge challenge this week for us with Oklahoma coming into town," Brown said. "They're playing their best football of the year.”