Explosive offense has No. 16 Utah atop Pac-12 South again 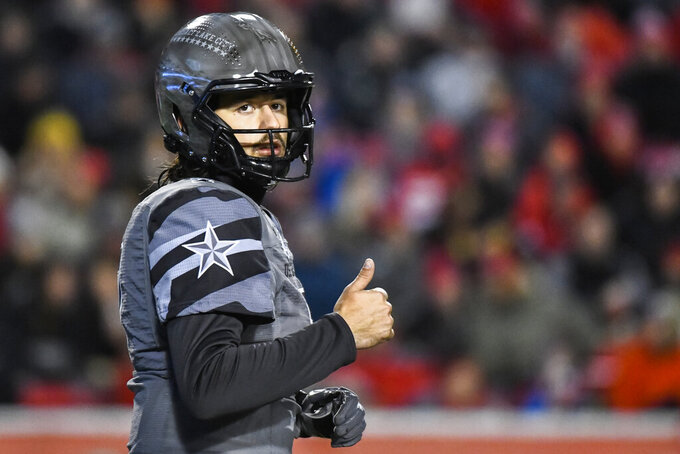 Utah quarterback Cameron Rising (7) gestures to his bench during the second half of an NCAA college football game against Oregon Saturday, Nov. 20, 2021, in Salt Lake City. (AP Photo/Alex Goodlett)

SALT LAKE CITY (AP) — A potent offense has given Utah another chance to play for a Pac-12 Conference championship.

The No. 16 Utes (8-3, 7-1 Pac-12, No. 19 CFP) clinched their third Pac-12 South title in four seasons by dismantling Oregon 38-7. The Ducks never had a chance after Utah rolled up 386 yards and scored five times on only eight possessions. Those eight drives included eight rushing plays where the Utes gained 10 or more yards and six passing plays where they gained 15 or more yards.

Such impressive numbers are no anomaly.

Utah enters its rivalry game with Colorado on Friday averaging a Pac-12-leading 38.4 points and 457 yards against other teams in the league. The Utes have scored 41 touchdowns in eight conference games and rank second in the Pac-12 with 214.5 yards rushing per game.

“We’re getting to the point in the season where I feel like we have such a great identity on offense,” Utah receiver Britain Covey said. “You trust it. You stay behind it, and you roll with it.”

The Utes have made strides on defense to complement their production on offense. Since surrendering a season-high 260 yards rushing to Oregon State, Utah has allowed just 98.3 yards per game on the ground against its last four opponents.

As good as it is, the Utes believe they’ve only scratched the surface along the line of scrimmage.

“Are we a finished product yet or where we need to be? No,” coach Kyle Whittingham said. “We’re still not quite as big and strong as we need to be. We have some freshman kids that next year will be 10 to 15 pounds heavier and stronger. I think that’s really going to be a boost for us.”

Keeping up with Utah’s potent attack presents a difficult challenge for Colorado.

Defensively, the Buffaloes are allowing 452.6 yards and 24.1 first downs per game against Pac-12 opponents.

“We’re not getting off the field on defense and we’re not staying on the field offensively,” Colorado coach Karl Dorrell said. “We have to be better in those two areas.”

The Buffaloes are trying to avoid a fifth consecutive loss in the series since dropping nine in a row to the Utes from 1925 to 1933.

Opponents are finding it increasingly tougher to stop Utah on third down. The Utes ranked 10th among Pac-12 teams in third-down conversions through their first five games. Since then, they’ve climbed to third in the league and eighth nationally. Utah is converting 49.2% of its third downs on the season.

The Utes have converted 54 of 94 third downs against other Pac-12 teams. They converted 11 of 14 against Oregon last week.

“We just know it’s a money down,” quarterback Cameron Rising said. “It’s a down you need. It’s a down that really matters in a game.”

Colorado forced four turnovers in its 20-17 victory over Washington last week. The Buffaloes recovered a pair of fumbles and snagged a pair of interceptions to overcome gaining just 183 yards total against the Huskies. Offensively, they had zero turnovers.

"We played smarter at the critical times, and we took care of the football,” Dorrell said. “We were opportunistic in getting turnovers and we scored when we needed to score.”

Over its last six games, Colorado has generated nine takeaways while giving up only two turnovers. The Buffaloes have lost only seven turnovers this season, tied for first in the FBS.

Utah LB Devin Lloyd was named as one of six finalists for the 2021 Butkus Award. Lloyd has assembled an impressive pedigree this season to merit inclusion among the finalists for the award given annually to the nation's top collegiate linebacker.

Colorado’s usual kick returner, Brenden Rice, will not play against Utah after suffering an injury against Washington. Freshman cornerback Nikko Reed will take his place on kickoff returns. Rice, the son of Pro Football Hall of Famer Jerry Rice, totaled 469 yards on 17 kick returns this season. He also tallied 299 yards and three touchdowns on 21 catches.

Rice enjoyed a breakout game against Utah last season. He returned a kick 81 yards for a touchdown and scored another touchdown on a 61-yard reception.