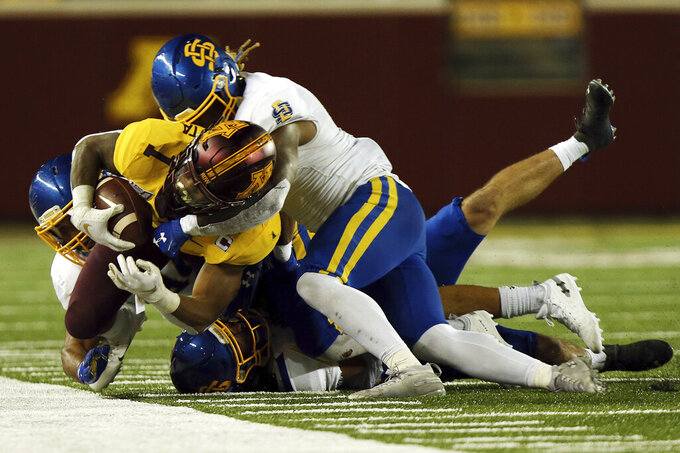 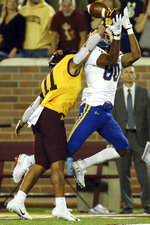 The Big Ten Gophers were double-digit favorites for the season's first game against their neighbors from the southwest, who nearly beat Minnesota in 2009, long before Fleck joined the Gophers.

So, when Mohamed Ibrahim finally put the Gophers ahead late in the fourth quarter, Fleck was ready to enjoy a win no matter how others perceive the narrow victory.

Ibrahim plunged up the middle for a 1-yard touchdown run with 5:39 remaining and Minnesota avoided an upset with a 28-21 win at home against South Dakota State on Thursday night.

Minnesota capped a five-play, 34-yard drive with Ibrahim's touchdown to pull ahead and extend the nation's longest winning streak of nonconference games to 16 in a row.

"These guys just spent 30 days practicing for fall camp and champing at the bit to get the chance to play against somebody else," Jackrabbits coach John Stiegelmeier said. "That stings a little bit, the fact that we could've won on the road against a Big Ten school — and I think a pretty good Big Ten program — stings a little bit."

Minnesota entered the season with plenty of hopes built on an offense with nine returning starters and four running backs that brought 6,503 combined rushing yards into this season.

The Gophers were tested by one of the best in FCS. South Dakota State ranked third and fourth, respectively, in the two major preseason FCS polls. Minnesota finished with 132 yards rushing on 42 carries for a 3.1-yard average.

"We were tested tonight and our players passed the test," Fleck said. "Whether we won by 40 or 20 or seven, we won. Now, are there a lot of things we have to get better at? Yes."

Tanner Morgan was 13-of-18 passing for 176 yards, one touchdown and one interception for Minnesota.

Rashod Bateman had five catches for 132 yards for the Gophers, including a one-handed, 42-yard touchdown pass from Morgan in the first half. The performance comes two weeks after the sophomore receiver's uncle died.

"He was like a father figure to me," Bateman said. "It was tonight just going out there and playing for him. He was pretty special. I know he's always there with me, so I've just got to continue to ball for him."

In his first start for the Jackrabbits in replacing Taryn Christion, the program's all-time leading passer, Gibbs was 13 of 26 for 193 yards passing and a touchdown and he added another touchdown rushing. But the redshirt freshman threw an interception that was returned 43 yards for a touchdown by Chris Williamson.

Minnesota: The Gophers can exhale. This was not the start Minnesota fans likely envisioned, another lackluster performance against a neighboring school. But the Gophers come away with a win. The defense will need examining after giving up 367 yards. Part of the trouble running the ball offensively was due to a down game from the offensive line. Fleck noted the line will need to play better.

Minnesota: The Gophers will go on the road to face Fresno State on Sept. 7.