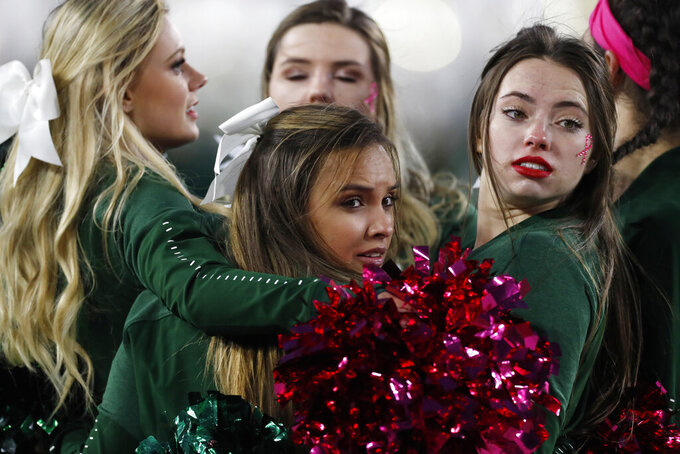 Donald Hammond III ran for a touchdown and threw for three more, including a go-ahead 50-yard catch-and-run to Sanders in the fourth quarter as Air Force shook off an early two-touchdown deficit to beat Colorado State 38-21 on Saturday night.

"DJ (Hammond) found me and I saw the hole open up downfield," Sanders said. "I wanted to take the lead back for our team and spark some energy and that's what happened."

Sanders came open on a short crossing route and Hammond hit him in stride, allowing the receiver to break up field along the left sideline and then cut back all the way across the field, outrunning his pursuers to the goal line. The score was part of a string of 24 straight points for Air Force (8-2, 5-1 Mountain West), which won its fifth straight. It's the longest winning streak for the Falcons since closing the 2016 season with six consecutive victories.

"It was a huge lift because we knew we could drive the ball on them," Hammond said. "We just had to trust ourselves and just finish drives. It just came down to finishing drives at the end of the day."

Hammond added a 28-yard touchdown pass to Benjamin Waters later in the fourth quarter after earlier hitting him with a 31-yard score.

Patrick O'Brien threw for two touchdowns, including a 17-yard score to Dante Wright with 6:36 remaining that pulled the Rams (4-6, 3-3) within three points. But the Falcons responded by grinding out another scoring drive that Hammond capped with a 1-yard run with 2:32 left to play.

The Rams mounted another drive that reached the Air Force 1, but cornerback Zane Lewis stepped in front of O'Brien’s goal-line pass and returned the interception 99 yards for a touchdown to seal the Falcons' fourth win in a row against the Rams. It capped a superb defensive effort by the Falcons that also included eight sacks.

"They pressured me pretty well," O'Brien said. "They were stunting and they were adding linebackers late in the pass rush. I couldn't avoid the pressure."

Jake Koehnke kicked a 31-yard field goal in the final minute of the second quarter, pulling Air Force to within 14-10 at the half after the Rams struck for two first-quarter touchdowns. Defensive lineman Jake Ksiazek helped set up the score when he recovered a fumble by O'Brien at the Rams 34.

Air Force got on the board midway through the second when Hammond connected with Waters over the middle for a 31-yard touchdown pass.

The Rams built a 14-0 lead, finishing off a season-long 14-play drive with O'Brien's 4-yard scoring pass to Trey McBride on a tight end screen and Mohamed Kamara's 63-yard fumble return. He scooped up a fumble by Hammond after a botched backfield exchange.

Air Force: The Falcons showed their mettle by coming back from an early 14-point deficit and maintaining their composure in a wild finish that saw them quash the Rams' late comeback bid with Lewis' dramatic interception return for a touchdown.

Colorado State: The Rams had the Falcons back on their heels with a pair of scores, including a defensive touchdown but Colorado State could not sustain its early momentum. The loss snapped a three-game winning streak by a resurgent Rams team.

With the victory, Air Force completed a season sweep of its chief in-state rivals. The Falcons beat Colorado 30-23 on Sept. 14.

"A win is a win, and win always feels great, especially when you can use the language that you're the best team in the state of Colorado. That feels amazing," Hammond said.

Midway through the third quarter, Air Force stuffed a fake punt play by the Rams well short of the first down, taking over near midfield. But on the Falcons' first play, Colorado State's Cam'ron Carter intercepted Hammond’s pass and returned it 19 yards to the Air Force 35. The Rams couldn't capitalize either, punting the ball away after nose guard Mosese Fifita broke through for a third-down sack of O'Brien.

Air Force: Goes on the road again to play at New Mexico on Saturday.

Colorado State: Has a short turnaround in taking on Wyoming in Laramie on Friday night.