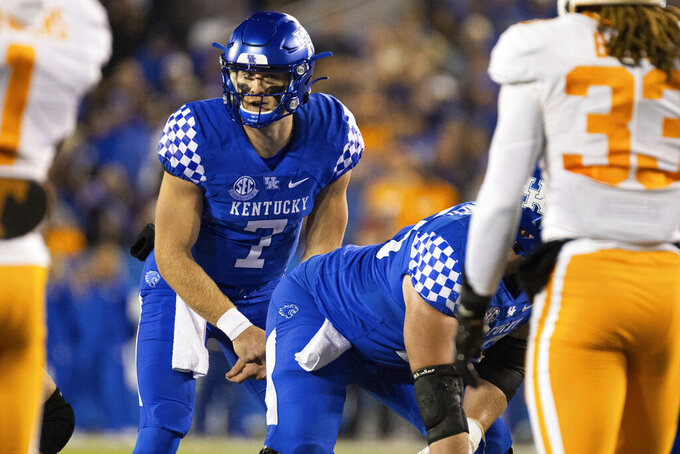 Kentucky quarterback Will Levis (7) surveys the defense during the first half of an NCAA college football game against Tennessee in Lexington, Ky., Saturday, Nov. 6, 2021. (AP Photo/Michael Clubb)

NASHVILLE, Tenn. (AP) — A season that started so very well for the Kentucky Wildcats has hit such a skid that coach Mark Stoops isn't taking any team for granted.

Not even Vanderbilt, which has lost 18 straight Southeastern Conference football games.

“No matter who we're playing, it’s about us, the situation that we’re in, how we react to what happened to us (last week) and the way we played and that will determine the outcome of this week,” Stoops said. “Just how we handle it, how we prepare, how we get ready.”

Kentucky (6-3, 4-3) started the season with a six-game winning streak and big wins over Florida and LSU in league play.

Now the Wildcats have lost three straight, the last knocking them out of the Top 25 after a 45-42 loss to Tennessee despite dominating almost every offensive category. Kentucky piled up 612 yards for a nice rebound after offensive clunkers at Georgia and Mississippi State.

“I can promise you there’s a lot of guys in that building that are just motivated to move on and try to go get the next victory," Stoops said.

The Commodores also are trying to end a skid in league play that is now 18 straight dating back to a win over Missouri on Oct. 19, 2019. They are coming off an open date to rest up from losing four straight, including a 37-28 loss to Missouri on Oct. 30.

“Hopefully the time off gives us a chance to launch here at the finish of the season,” Lea said. We’re battling what every team is battling and that’s the accumulation of the grind and it’s a physical grind, a mental grind. But I’m excited to watch this team through to the finish.”

LEVIS, BACK IN STEP

While Kentucky quarterback Will Levis threw another interception that Tennessee returned for a momentum-shifting touchdown in a back-and-forth game, he did a lot of good things for the Wildcats. He also carried his team offensively with a career-high 372 yards and three TDs passing in totaling 419 yards and five scores overall. It was his second such TD effort this season and the program’s first QB to do so.

“He's made a big impact for them,” Lea said.

Vanderbilt could have quarterback Ken Seals back after he missed the last three games with an injured finger with Mike Wright replacing him as the starting quarterback. Seals is practicing, but Lea has made clear he wants the sophomore back fully recovered before playing.

“We'll see how he responds through the week and a decision later on in the week on who starts,” Lea said.

Stoops, whose specialty is pass defense, acknowledged taking it “personally” after Tennessee scorched his cornerbacks for two long TDs in its first four plays. He didn’t single out any player for blame but stressed the need to get an advantage in coverage.

“It’s as simple as leveraging the football,” he said. “How many times have I talked about that? I can’t talk about it anymore. We got to get it taught — football 101, leverage the damn ball.”

Vanderbilt is the only SEC team with four different players who have more than one interception this season. Dashaun Jerkins is tied for third with three interceptions this season, while Ethan Barr, Jaylen Mahoney and Maxwell Worship have two apiece.

The Commodores are tied for 15th nationally and third in the SEC with 11 interceptions, which is more than the past two seasons combined. They've picked off at least one pass in the each of the last six games.