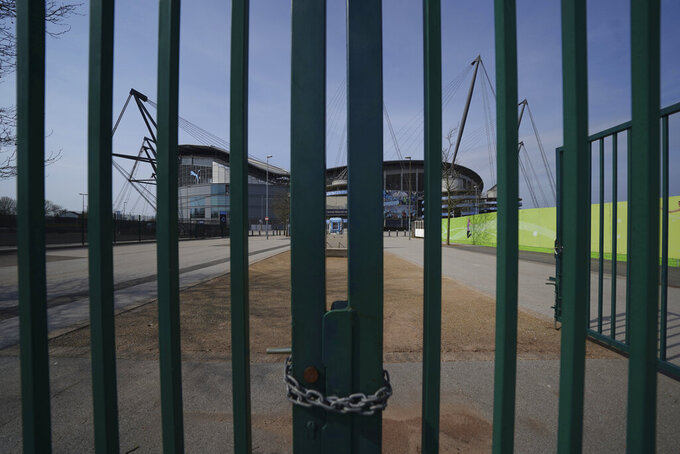 FILE - In this file photo dated Thursday, April 9, 2020, gates stand locked outside the closed English Premier League soccer Manchester City Etihad Stadium, in Manchester, northern England. Guidance for sports bodies was published by the government on Saturday May 30, 2020, as COVID-19 lockdown restrictions are being eased further, allowing Sports events to resume in England from upcoming Monday, without any spectators and providing they comply with the government's coronavirus protocols. (AP Photo/Jon Super, FILE)

Texas brought in 58 players this week to the campus that is otherwise closed to students. One of them presented symptoms during pre-screening and was tested before arriving. The other two were tested during the on-campus screening process.

Senior Associate Athletics Director for Sports Medicine and Performance Allen Hardin said their families have been notified and the two players with the COVID-19 virus are self-isolating.

The announcement did not indicate if any of the players were among a group that marched together with coach Tom Herman last week from the campus football stadium to the state Capitol in honor of George Floyd. The players wore masks during the march but many also walked with their arms locked together.

One player and three caddies on the developmental Korn Ferry Tour have tested positive for the coronavirus.

The PGA Tour says it administered 1,559 tests -- at home and at tournament sites -- for the PGA Tour event in Fort Worth, Texas, and the Korn Ferry Tour event in Ponte Vedra Beach, Florida.

The positive results were from saliva tests and were done at home. The tour recommended -- but did not require -- that players and caddies take tests before traveling to the tournament.

The tour did not disclose the names of those testing positive. They were to self-isolate for at least 10 days and have two negative test results at least 24 hours apart before returning.

The tour said there 487 tests at tournament sites on the PGA Tour and 407 tests on the Korn Ferry Tour, all negative.

The opening two rounds of the 2020 AMA Motocross season will have fans in attendance.

The July 18 race at Ironman Raceway in Crawfordsville, Indiana, and the July 25 races at WW Motocross Park in Jacksonville, Florida, will include social distancing policies to be announced later.

The rest of the outdoor motocross schedule will be rolled out in phases as additional venues are allowed to welcome fans.

Motocross’ decision comes a day after NASCAR announced it will allow fans to attend races in Florida and Alabama.

The English Premier League says one person has tested positive for the new coronavirus after testing on 1,213 players and staffers across the 20 clubs.

The person who tested positive was not identified.

Testing is taking place at clubs twice a week ahead of ending the league’s 100-day shutdown next Wednesday.

All games will be closed to fans for the remainder of the season.

Tennis players ranked outside the top 500 in singles or outside the top 175 in doubles are eligible for grants worth up to $1,000 from the International Tennis Federation to help deal with the suspension of competition because of the coronavirus pandemic.

The ITF announced Wednesday specifics of a total relief fund worth more than $2.5 million, including money for national associations and players.

More than 1,000 ITF events, including junior and wheelchair tennis, have been wiped out since March because of the COVID-19 outbreak.

The ATP and WTA tours also have been suspended since March. Those tours teamed with the ITF and the four Grand Slam tournaments to set up a $6 million fund for certain players, including those ranked from 101 to 500 in singles.

The Southeastern Conference has scrapped its scheduled football media days in July and instead plans to hold its first virtual event.

League officials announced the decision Wednesday. SEC media days had been scheduled to be held July 13-16 in Atlanta at the College Football Hall of Fame and Omni Atlanta Hotel.

Commissioner Greg Sankey says the virtual format will allow the league to manage media days in a healthy manner during the coronavirus pandemic and give programs flexibility as they prepare for the upcoming season. Sankey says the SEC looks forward to returning to its traditional media days format in 2021, which had been scheduled for Nashville.

The SEC did not announce dates for the new virtual media days. Sankey is expected to deliver his annual “State of the SEC” along with media sessions with all head coaches and select players.

Petra Kvitova will play at a tennis exhibition event next month in Berlin and Tommy Haas will come out of retirement to join in.

Haas hasn’t played since 2017 and is tournament director of the Indian Wells event. He was added to a men’s tournament alongside Dominic Thiem, Alexander Zverev, Nick Kyrgios and Jannik Sinner.

One more player is still to be announced for each of the men’s and women’s events.

Organizers plan to play on grass from July 13-15 and then on hard courts from July 17-19. No fans are expected to be able to attend amid the coronavirus pandemic.

Everton will be allowed to host city rival Liverpool at Goodison Park instead of playing at a neutral venue when the rivals meet on June 21.

Police had initially believed the Merseyside derby could not be staged in Liverpool because of fears that fans would congregate outside.

Premier League games will take place without fans for the rest of the season because of the coronavirus pandemic.

The Ground Safety Advisory Group in Liverpool says Anfield and Goodison Park can now be used for Liverpool and Everton matches.

Liverpool could clinch the trophy by beating Everton if Manchester City loses to Arsenal on June 17.

Liverpool Deputy Mayor Wendy Simon says “we are confident the measures in place will allow the matches to be held behind closed doors without any detrimental impact to all concerned and recommend to the city council that the safety certificates for both grounds be amended to allow this to happen.”

The second-division club says the 50-year-old O’Neill had tested negative in five previous rounds of testing but the positive result came from a test administered on Monday.

Stoke says O’Neill will “follow the relevant guidance and undergo a period of isolation.” Assistant manager Billy McKinlay will take charge of training.

Stoke is scheduled to play Reading when the Championship resumes on June 20.

The Premier League returns to action with two matches on June 17.