Led by Hurts, dual-threat QBs rule in the Big 12 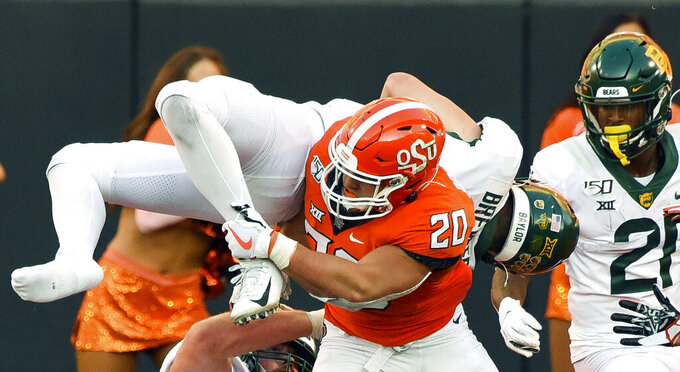 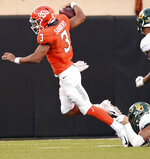 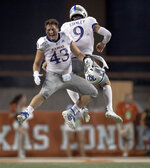 CHARLESTON, W.Va. (AP) — The pass-happy Big 12 isn't what it used to be. The dual-threat quarterback is taking over.

No longer is 400-plus yards through the air the norm in a league where most of the starting quarterbacks are mobile and adding another element to an offense.

"It's always more difficult on defensive coaches if you have a guy who can run with the football," TCU coach Gary Patterson said.

Six Big 12 quarterbacks have thrown for more than 200 yards and rushed for at least 50 in a game this season. Oklahoma's Jalen Hurts leads the nation with six such games. Joining him are Sam Ehlinger of Texas and Oklahoma State's Spencer Sanders with three apiece, Baylor's Charlie Brewer and Iowa State's Brock Purdy with two each and Carter Stanley of Kansas has one. Kansas State's Skylar Thompson ran 61 yards on a fourth-quarter play last Saturday to set up his 3-yard touchdown run that gave the Wildcats a 24-17 win over TCU.

"It's tough to play defense right now," West Virginia coach Neal Brown said. "Those are really good quarterbacks that are playing at a high level and they all have the ability to run."

Iowa State coach Matt Campbell said mobile quarterbacks are prevalent in high school football, so finding one who can run and throw "is probably is a lot easier today than it's ever been.

"Almost everybody in the Big 12 has got a quarterback that's got the ability to do both — and to do both well," he said.

It also brings the added risk of injury, and they have to be taught how to slide and properly go out of bounds while trying to gain extra yards.

Hurts, the Alabama graduate transfer who surpassed 100 yards rushing seven times over three seasons with the Crimson Tide, has three such efforts this season. Sanders, Purdy and TCU's Max Duggan also have gone over 100 rushing yards in a game. Eight Big 12 quarterbacks have rushed for 60 yards or more in a game over their careers.

Hurts is in a category of his own. There have been only nine FBS quarterbacks to throw for 3,000 yards and rush for 1,000 in a season. Hurts is on pace to make it two years in a row for an Oklahoma quarterback.

Oklahoma coach Lincoln Riley said there is a fine line between protecting a quarterback and giving him the freedom to run. With Baker Mayfield and Kyler Murray, he had two quarterbacks who could cause problems for defenses when they chose to run. Hurts forces defenses to account for his running game; his 705 yards ranks third among all Big 12 rushers.

"He's a different kind of runner," Riley said. "He's a guy who's pretty tough to bring down. He's got a body that's pretty durable. We try to find some balance with it. We don't want him to take an unnecessary one, but at the same time, it's certainly a good weapon for us."

Still, Riley said there's been just a few times he wished Hurts had gone down instead of trying to get more yards. Rhule said he doesn't call a lot of designed runs or zone-read options at Baylor with Brewer, and understands part of his skill set is the ability to freelance.

"Most of his runs come from him scrambling," Rhule said. "We know Charlie's going to pull the ball down and run it versus man coverage and things like that, and that's really part of his game. But with that comes some inherent risk we have to just deal with."

Don't worry. There's still been some eye-popping passing performances (see Texas Tech's Alan Bowman against Montana State before he got injured, Purdy against Louisiana-Monroe or Hurts against Texas Tech). But nothing like 2012, when three quarterbacks each threw for over 550 yards in a game.

The days of pure pocket passers all over the league is on hiatus. Purdy is the only Big 12 quarterback averaging more than 300 passing yards per game. The last time that happened was in 2006.

Seven Big 12 teams are now running the ball more than they throw it.

"It's still what fits your system, what fits your style," said Kansas State coach Chris Klieman, whose team loves to gobble up yards and the clock with a punishing ground game. "We're seeing so many guys that can beat you with their legs as well as being really competent, good throwing quarterbacks. As a defensive guy, when you have to defend the 11th man on every play with the potential of the quarterback run, it just makes it that much more difficult."