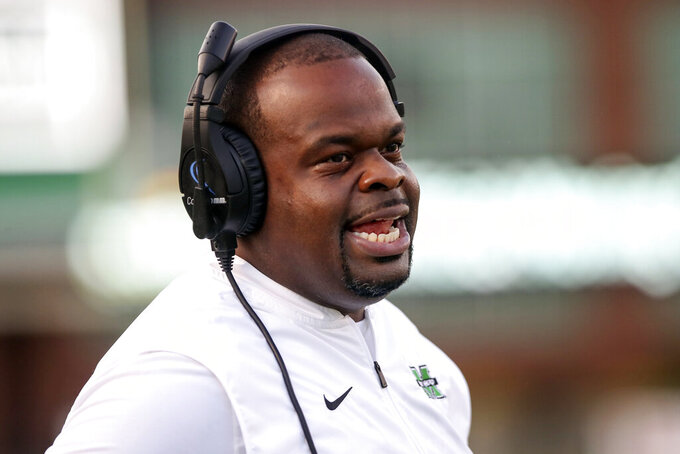 FILE- Marshall coach Charles Huff talks with an official during an NCAA college football game against North Carolina Central on Sept. 11, 2021, in Huntington, W.Va. Marshall announced it is moving to the Sun Belt Conference, becoming the ninth school to reveal plans to depart the dwindling Conference USA. (Sholten Singer/The Herald-Dispatch via AP, File)

Marshall is moving to the Sun Belt Conference, becoming the ninth school to reveal plans to depart the dwindling Conference USA.

A video posted Friday on the Marshall Athletics Twitter account teased the official announcement from the Huntington, West Virginia-based school that has been a member of C-USA since 2005.

Earlier this week the Sun Belt announced C-USA schools Southern Mississippi and Old Dominion would be joining the conference by 2023. The additions will give the Sun Belt 13 football-playing members.

Last week, six C-USA schools announced they would be leaving for the American Athletic Conference at a date to be determined.

C-USA Commissioner Judy MacLeod has said the conference is pursuing new members, including FCS schools that are considering making the move to FBS, the NCAA's top tier of Division I college football.

UConn athletic director David Benedict told CTInsider.com that the school had an exploratory conversation with C-USA officials about a football-only membership. UConn rejoined the Big East for basketball and most of its other sports programs last year.