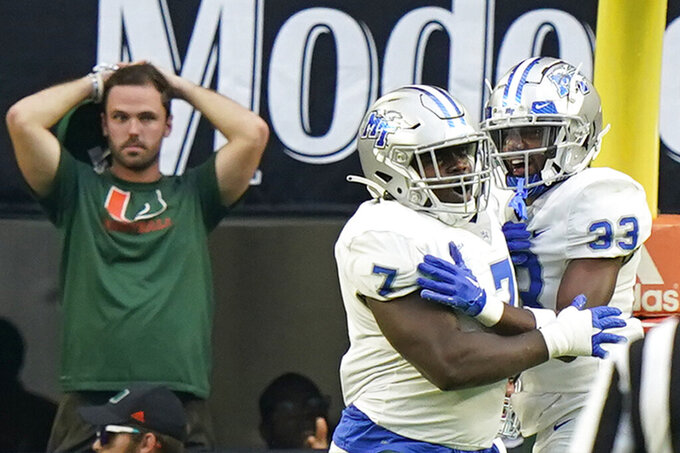 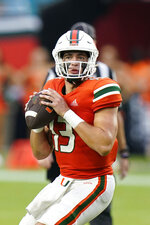 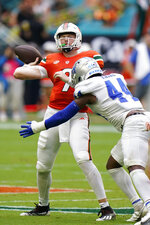 And for Miami, there are big problems.

Chase Cunningham passed for 408 yards and three touchdowns, including a 98-yarder to DJ England-Chisholm, and Middle Tennessee State stunned No. 25 Miami 45-31 for its first win in 21 tries against ranked opponents.

“It was a butt-kicking from the very beginning," MTSU coach Rick Stockstill said.

He wasn't wrong. MTSU (3-1) never trailed, forced turnovers on Miami's first three possessions, stopped the Hurricanes (2-2) on downs on three other occasions and scored on passes of 69, 71 and 98 yards — and had another 89-yard pass in there for good measure.

Those four plays alone added up to 327 yards, or 63 more than Miami allowed in its entire game a week earlier at Texas A&M.

“They coached better than us, they played better than us," Miami coach Mario Cristobal said. “They were better. We didn't do a good enough job. There's no excuse. Real men look in the mirror and do something about it and don't allow any cracks to happen from the inside. We all came here for a purpose and a reason. We've got a lot of work to do."

England-Chisholm caught two passes — the first of them being a 71-yard touchdown in the first quarter, the other being the 98-yarder in the fourth — to help the Blue Raiders seal the upset.

Cunningham completed 16 of 25 passes for Middle Tennessee State, including a 69-yard scoring throw to Elijah Metcalf. Cunningham and Frank Peasant also ran for scores for the Blue Raiders, and defensive end Zaylin Wood returned an interception for a touchdown.

“I trust my guys to the end, and they won every single time," Cunningham said.

Key’Shawn Smith returned a kickoff 91 yards for a touchdown for Miami, which turned the ball over on its first three possessions and never escaped the early hole it dug. Quarterback Tyler Van Dyke — the Atlantic Coast Conference rookie of the year last season — was pulled in the third quarter and replaced by Jake Garcia.

Van Dyke completed 16 of 32 passes for 138 yards, one touchdown to Henry Parrish Jr., and two interceptions — those coming on Miami’s first and third plays from scrimmage. Garcia completed 10 of 19 passes for 161 yards for the Hurricanes, who heard plenty of boos from the fans who showed up to what was not even a half-filled stadium; most were long gone before the final whistle.

“We looked at that team, ’Oh, we’re going to win this game,'” Miami offensive lineman Jalen Rivers said. “So we came in obviously unmotivated ... and we got punched in the mouth.”

Defensive back Kam Kinchens was more direct: “Everybody played horrible."

Garcia entered midway through the third quarter and brought an immediate spark. He engineered a five-play, 72-yard touchdown drive — fueled by passes of 39 and 23 yards, Miami’s two biggest gains of the day to that point — and got the Hurricanes within 31-17 on a 1-yard rush by Thad Franklin, the first of his two scores on the day.

The win was a long time coming for Stockstill, who played his college football at Florida State — Miami’s rival. The Seminoles went 0-2 in games that Stockstill played against the Hurricanes in 1980 and 1981.

Those games were close. This one wasn’t.

And while a blowout might have been expected with Miami entering as a 25.5-point favorite, few, if anyone, would have dared to say it would be the Blue Raiders doing the romping. It even had oddsmakers scrambling; MTSU actually became the betting favorite to win by the midpoint of the second quarter, according to FanDuel Sportsbook.

“We came down here and I told them Michael Irvin and Ray Lewis and those guys weren't coming out of that tunnel," said Stockstill, who had some family, friends and former FSU teammates on the trip. “We came down here with a strong belief and just a great, great competitive spirit."

It was 10-0 before Miami got on the board, 24-3 early in the second quarter when Cunningham scored on a 9-yard rush. The Hurricanes never got closer than 14 points the rest of the way.

Miami had a chance to get within a touchdown on a 4th-and-goal from the Middle Tennessee 1 on the opening play of the fourth quarter; Garcia’s pass couldn’t be controlled by tight end Will Mallory, causing a turnover on downs.

The next play, England-Chisolm got loose down the left sideline for the second-longest pass play ever allowed by the Hurricanes; Jamison Crowder had a 99-yard TD reception for Duke in a loss to Miami in 2012.

From there, it was only a matter of time before MTSU could truly start the celebration.

“A lot of people doubted us," said receiver Jaylin Lane, who had the 89-yard catch. “But this shows all about our perseverance."

Middle Tennessee State: The Blue Raiders went to the upper level of college football, now called FBS, in 1999. Entering Saturday, they were 0-20 against opponents that were ranked in the AP Top 25 poll when those games were played and outscored by 585 points — 868-283.

Miami: According to SportRadar, the Hurricanes became the first Power 5 school this season to commit three turnovers in a first quarter. The last Power 5 school to achieve that ignominious feat was ... Miami, last season against Florida State.

It’s over for Miami, for now. The Hurricanes were No. 25 and will fall out of the poll Sunday. At 2-2, it’ll be difficult for the Hurricanes to be considered again by many voters anytime soon.

MTSU is now 3-0 all-time against Miami, with the other wins coming in 1931 and 1932. The Hurricanes never held the lead in any of those games.

Middle Tennessee State: Hosts UTSA on Friday in the Conference USA opener for both clubs.