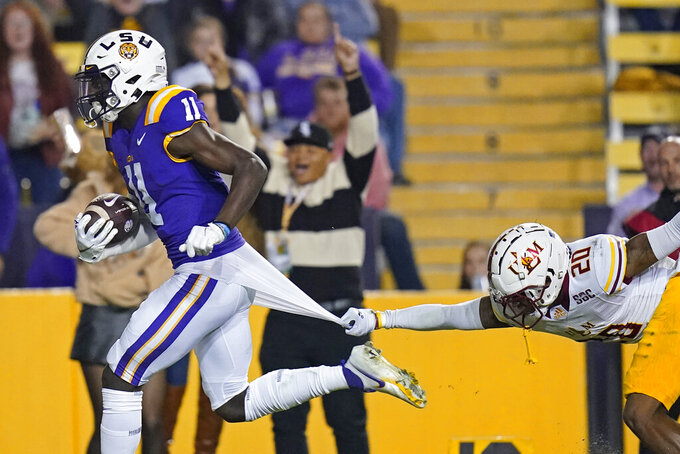 Snapping a three-game losing streak, the Tigers (5-6, 2-5 SEC) continued to struggle to develop any sort of rhythm offensively, scoring only 17 points well into the third quarter against the nation’s 115th-ranked scoring defense in ULM (4-7, 2-5 Sun Belt).

“Very pleased with the win,” LSU coach Ed Orgeron said. “Did we play great? No. Did we make some mistakes? Yes, but we won the game. I’m happy for the boys.

“It was good to finally be back at home and playing at night. Our guys were energized. I’m very pleased with how we played defensively. We came out and scored on the first drive offensively, but once again stalled in the red zone.”

After forcing a ULM punt on its opening possession, sophomore Max Johnson connected with Nabers on passes of 7and 48 yards on a five-play, 64 yard drive that culminated in a 3-yard touchdown run by Johnson to make it a 7-0 LSU advantage.

Up 10-0 after a 27-yard field goal by Cade York, Johnson hit Nabers on a quick slant that turned into a 67-yard scoring strike, a season long for the Tigers, to extend the lead to 17-0.

Johnson connected with freshman Brian Thomas from 42 yards out late in the third quarter and, after Chandler Rogers found Zach Rasmussen for a 27-yard score that pulled the Warhawks to 24-14, York kicked a 50-yard field goal with 46 seconds left.

After only playing two series last week against Arkansas, Johnson took every offensive snap against ULM, completing 22 of 33 passes for 319 yards and two touchdowns.

Louisiana-Monroe: In his first year at the helm, Terry Bowden’s Warhawks will finish with a non-winning record for the eighth consecutive season. ULM’s last winning season came in 2012, when they finished 8-5.

LSU: With the victory the Tigers keep their bowl chances alive. LSU must defeat Texas A&M next week in order to finish the regular season with a 6-6 mark. They haven’t had a losing season since a 3-8 finish in 1999.

Louisiana-Monroe: Travels to Louisiana-Lafayette on Nov. 27