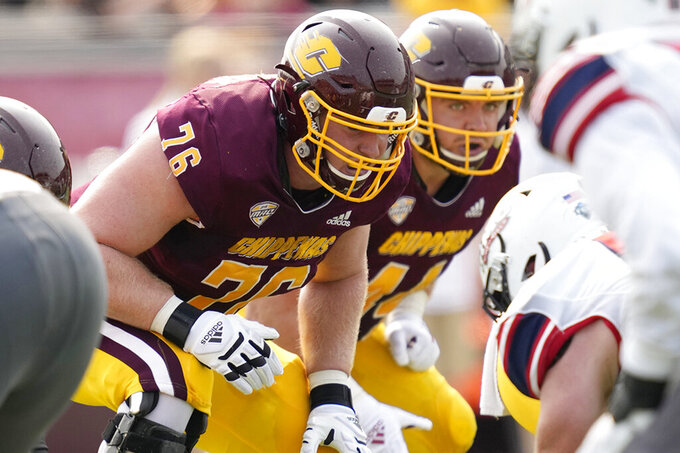 In this image provided by CMU Athletic Communications, Central Michigan offensive lineman Bernhard Raimann lines up against Robert Morris during an NCAA college football game on Sept. 11, 2021, in Mount Pleasant, Mich. Raimann grew up in Austria and, like many European kids, he was initially into soccer. But he signed up as a teenager to play with the Vienna Vikings, an American football club team. Tall and gangly, he was originally a wide receiver. (Steve Jessmore/CMU Athletic Communications via AP) 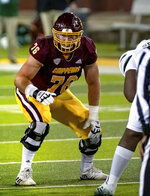 Probably one of the more unusual stories heading into the 2022 NFL draft involves the journey of Central Michigan offensive lineman Bernhard Raimann.

Raimann grew up in Austria and, like many European kids, he was initially into soccer. But he signed up as a teenager to play with the Vienna Vikings, an American football club team. Tall and gangly, he was originally a wide receiver.

He came to the United States as an exchange student and played at tiny Delton-Kellogg High School in Delton, Michigan. From there, he found his way to Central Michigan, where the father of his host family once played.

Raimann switched last year from tight end to left tackle, starting all six games in the coronavirus-shortened season, and he's been attracting attention ever since. Going into this season, he was trying to shut out the noise and just play. He's still growing into the position.

Oh, and he's smart, too. Raimann graduated in May with a 3.8 GPA, with an actuarial science and statistics double major with a mathematics minor. He's now in an accelerated program for a master's degree in applied statistics and analytics.

Raimann is a 6-foot-7, 305-pounder who put on 50 pounds in his transition to offensive lineman. He's still got a wide receiver's athleticism despite his considerable size, and he's got a 33-inch vertical leap.

Raimann grabbed attention at the start of the season when the Chippewas faced Missouri and LSU and he held his own. In a game against Western Michigan, he simply upended a defensive lineman and a clip of the play circulated widely online. Raimann, along with Chippewas right tackle Luke Goedeke, has helped running back Lew Nichols III rush for more than 1,500 yards and 14 touchdowns this season.

“From a football standpoint, he’s still really a young player in terms of his development and particularly at the offensive line position -- going to Central Michigan and playing tight end at the beginning of his career and making that transition," Nagy said. “I think there’s a lot to like there. I think teams are going to see a guy with a high ceiling.”

Early mock drafts had Raimann going in the third round but he's been climbing ever since and now many pundits put him as a firm second-rounder. The top NFL prospect at offensive tackle is Evan Neal of Alabama, but Trevor Penning of Northern Iowa and Charles Cross of Mississippi State are also considered top prospects.