No. 13 Georgia hosts Mississippi St with something to prove 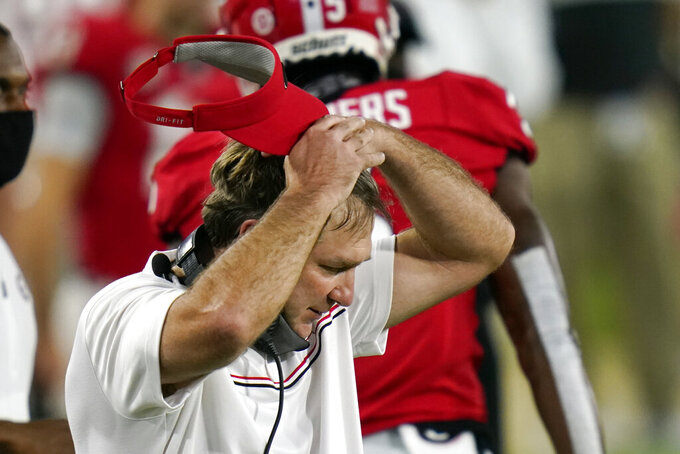 Pride, mainly. Georgia still has an outside shot at reaching the Southeastern Conference championship game, but would need to win out and hope Florida loses two of its last four games — highly unlikely with the Gators' remaining opponents sporting a combined record of 7-17. Mississippi State is looking ahead to 2021 after a stunning upset over defending national champion LSU in the season opener was followed by a four-game losing streak.

Georgia's defense vs. Mississippi State QB Will Rogers or K.J. Costello. Coach Mike Leach wouldn't announce a starting quarterback, but whoever gets the nod will have his hands full against a Georgia defense that has something to prove after giving up 571 yards to Florida — its worst showing of the Kirby Smart era.

Mississippi State LB Aaron Brule. The 6-foot-1, 230-pound sophomore leads the team with 20 total pressures (16 hurries, two quarterback hits, two sacks), which is tied for sixth in the SEC and leads all linebackers. He posted a career-high 12 tackles against Vandy.

Georgia QB JT Daniels. Smart also declined to reveal his starting quarterback, but it seems likely that Daniels will finally get a chance to take snaps for the Bulldogs. A transfer from Southern Cal, he missed all but one game last season with a knee injury. He has fully recovered and could give a boost to Georgia's anemic passing game, which ranks 12th in the SEC in yards per game (209.3).

Georgia has won 10 straight meetings at Sanford Stadium since Mississippi State's last victory in Athens, a 19-7 triumph in 1956. ... Both teams are coming off unexpected off weeks. Georgia's game at Missouri was postponed by COVID-19 concerns, while State's game against Auburn was called off for similar reasons. ... This will be Georgia's first home game since a 44-21 win over Tennessee on Oct. 10. ... Mississippi State RB Jo’quavious Marks ranks second nationally among freshmen with 38 receptions. That's a school record for both freshmen and running backs. ... If Daniels gets the call, he would be Georgia's third starting quarterback of the season. Redshirt freshman D'Wan Mathis started the opener at Arkansas, while former walk-on Stetson Bennett held the job in the last five games.