No. 13 Oklahoma looks to regain steam against Baylor 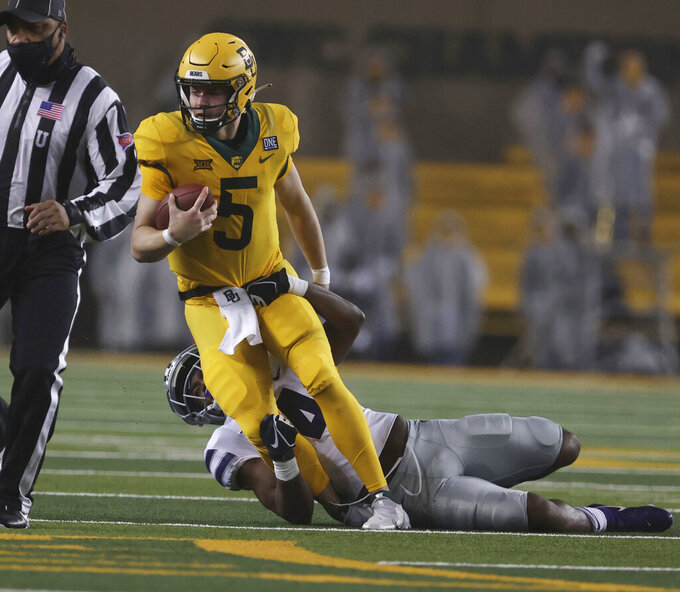 The good news for Oklahoma -- its players are rested.

The bad news -- it’s because the Sooners’ last game at West Virginia got postponed because of COVID-19 cases and contact tracing in the Oklahoma program.

Coach Lincoln Riley said the health situation has improved, and he is looking at the bright side heading into the 13th-ranked Sooners’ game Saturday against Baylor.

“We’ve got some guys that have got a pretty good load on them, so I think we’re a pretty fresh football team," Riley said. "That’s one of the positives of having five days where you shut down, is I do think we’re pretty fast and fresh and moving around pretty good.”

Oklahoma (6-2, 5-2 Big 12, No. 11 CFP) will try to pick up where it left off before the unexpected schedule shift. The Sooners rolled past Oklahoma State 41-13 in their most recent game for their fifth straight win, boosting their chances of playing in the Big 12 championship game.

An Oklahoma loss opens the door for rival Oklahoma State to reach the Big 12 title game, so the Sooners are ready to go.

“Just being around players and all of our different guys, we have a very locked-in group right now,” Oklahoma H-back Brayden Willis said. “We have a goal that we set at the beginning of the year, and we’re striving towards that goal, and we’re not going to let anything derail us right now.”

The Sooners came out of the week thankful for the possibility of playing.

“We talked a lot about as a team, ’who knows how many of these we’ve got left,” Riley said. “This may be the last one and we don’t even know it. And so we’ve tried to prepare and play that way because we don’t know.”

Baylor (2-5) is coming off a dramatic win over Kansas State last week that snapped a five-game losing streak. John Mayers made a 30-yard field goal as time expired to give the Bears a 32-31 win.

“When you do it one time you can do it another time,” Baylor coach Dave Aranda said. “For leaders to emerge and kind of step out there and make plays, and to have our team step up and then back them up -- I think that’s the way.”

Riley said Oklahoma decided after talking to families not to have traditional Senior Day festivities. He said the issues included not being able to get families to the stadium, not having a full stadium and the uncertainty behind if seniors are actually leaving because of the extra year of eligibility the NCAA has granted athletes due to the pandemic.

He plans to honor them down the road.

“I think that with all that’s going on right now, I just don’t know that we could do it the way we want to do it,” he said.

Aranda said Baylor quarterback Charlie Brewer has been better since the Bears simplified the game for him. Brewer passed for 349 yards and two touchdowns and ran for two scores in the win over Kansas State. The Bears have tried to take better advantage of his versatility, running him 16 times against Texas Tech and 23 times against Kansas State.

“Charlie is at his best when it’s a 1-2 read, and if it isn’t there, then go,” Aranda said. “That’s what you’re seeing. When it’s not that, say it’s a full field read or it’s this or it’s that, I think that’s not when he plays at his best.”

With Oklahoma’s coaching staff depleted by COVID-19, Riley called on former Oklahoma coach Bob Stoops to help assist him during the week. Stoops can step in because he’s an institutional staff member, and Riley didn’t rule out having him help in some capacity during the game if necessary.

Stoops led the Sooners to 10 conference championships and a national title in 18 seasons. He had a career record of 190-48 at Oklahoma before he retired and Riley replaced him.

Oklahoma’s defense has allowed just 16 points per game in its past four games.

The Sooners rank seventh nationally in sacks per game. In Big 12 play, outside linebacker Nik Bonitto leads the way with .93 sacks per game and defensive lineman Isaiah Thomas is fourth with .79. Defensive end Ronnie Perkins has 3.5 sacks and 6.5 tackles for loss, despite playing in just three games.

Oklahoma’s defensive line might be getting a boost soon.

Riley said LaRon Stokes is nearly recovered from an undisclosed injury, and he benefited from the extra week between games. Stokes, the Big 12’s Defensive Newcomer of the Year last season, has played in five games this season.