No. 2 Cincinnati aims to stay on course at South Florida 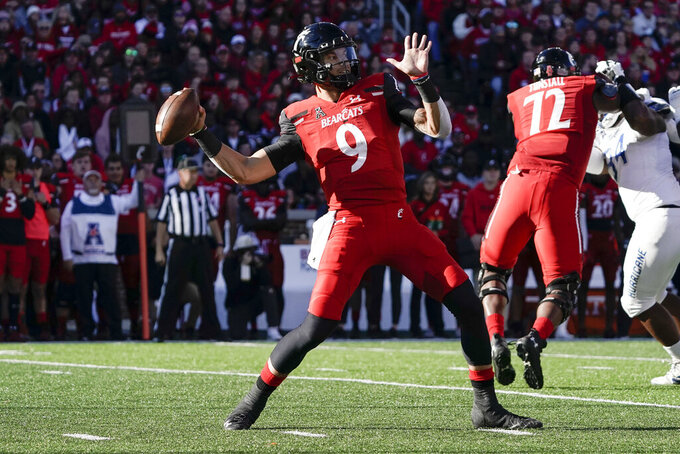 Cincinnati quarterback Desmond Ridder (9) throws during the first half of an NCAA college football game against Tulsa on aturday, Nov. 6, 2021, in Cincinnati. (AP Photo/Jeff Dean)

Line: Cincinnati by 23 1/2, according to FanDuel Sportsbook.

Cincinnati, one of four unbeaten FBS teams, aims to begin a season with 10 consecutive wins for just the second time in school history. The Bearcats also did it in 2009, when they got off to a 12-0 start. South Florida has dropped 18 straight to opponents ranked in the top 20, including last week’s 54-42 loss to Houston.

Cincinnati’s stingy defense against an improving USF offense that has made strides since freshman Timmy McClain took over at quarterback. The Bearcats are second in the conference in total defense, allowing 312.4 yards and a league-low 14.9 points per game. The Bulls are coming off scoring a season-best 42 points against Houston, however that included a pair of 100-yard kickoff returns for touchdowns.

Cincinnati: QB Desmond Ridder has thrown for 2,121 yards and 20 TDs vs. five interceptions. RB Jerome Ford, whose status in uncertain due to a leg injury suffered last week against Tulsa, is closing in on 1,000 yards rushing (888). Ford also has scored an ACC-leading 15 TDs on the ground.

South Florida: RB Brian Battie is only the second player in AAC history to return two kickoffs for TDs in the same game. He also scored on a 29-yard run in the loss to Houston and leads the nation with three kickoff returns for TDs overall.

Cincinnati has won three straight in the series, including 28-7 at home a year ago. ... The Bearcats are 41-5 since the start of the 2018 season and have won 12 in a row vs. AAC opponents. ... Top-ranked Georgia, No. 4 Oklahoma and No. 15 UTSA are the nation’s other unbeaten FBS teams. ... Ridder has 77 career TD passes, one shy of the Cincinnati school record. ... Bearcats WR Alec Pierce had five receptions for 113 yards and one TD in last week’s 28-20 victory over Tulsa. ... McClain threw for 289 yards and two TDs in USF’s loss to Houston. The freshman QB also ran for 46 yards and a touchdown. ... Bulls RB Jaren Mangham is second in the AAC with 13 TDs rushing.