No. 22 Wake Forest faces challenge with its QB sidelined 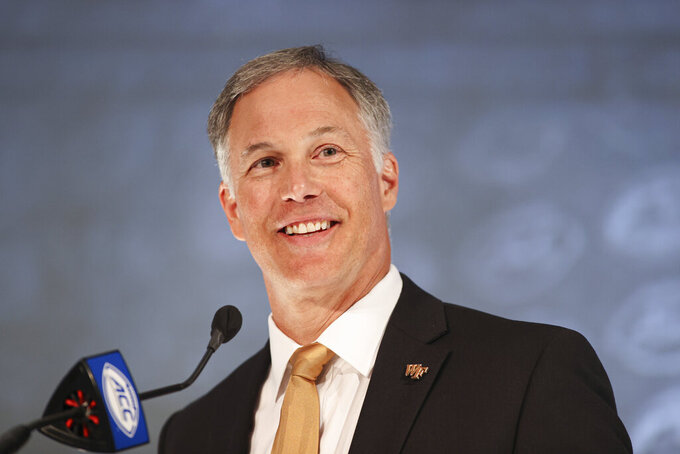 Years of patient building led Wake Forest to the Atlantic Coast Conference championship game. Coach Dave Clawson knows it’s going to take even better play to stay there, and that job has only gotten tougher during preseason.

The 22nd-ranked Demon Deacons hit an unexpected bump with quarterback Sam Hartman having to step away indefinitely to seek treatment for what the school has described only as a medical condition unrelated to football.

It's unclear when he might return, a big question for a team that otherwise has nine offensive and eight defensive starters back from a squad that cracked the top 10 nationally and tied a program record with 11 wins.

“We've got an experienced O-line, we've got really good running backs, we've got a great tight end. we've got good skill," Clawson said. "I think we have a very improved defense. ... We are far better prepared to handle this than at any point during my time here."

Last season's strength was the nation’s No. 4 scoring offense (41.0) in a scheme that hummed at one of the fastest tempos in the country (77.4 plays per game), while it also pressured defenses with a “slow-mesh” point between the quarterback and running back that disguised whether it would be a run or pass play.

“You just want a week-to-week consistency in what we do and how we do it,” Clawson said, adding: “Defensively I’d go into every game saying, ‘Is this a week we’re going to play well or is this a week I’ve got to be aggressive on fourth down and play for touchdowns?’”

The Demon Deacons will have to rely on third-year freshman Mitch Griffis or fourth-year sophomore Michael Kern until Hartman returns. Clawson listed Griffis as the top quarterback but said both players would get first-team reps to ensure both are ready.

“This is his team, this will be his team this year,” Griffis said. “My job and my goal is, when he's ready, give him the keys back, ready to play (the ACC title game) in Charlotte.”

Wake Forest’s receiver development has long been a strength, including last year’s rise of Jaquarii Roberson (now in the NFL) and the returning A.T. Perry (1,293 yards, 15 touchdowns).

Greene was slated for a big role last year after having multiple big games in 2020, including in a high-scoring loss to North Carolina (eight catches for 170 yards and two scores).

“All the measurables and all the things you’ve got to do to come back from that, he’s hit all those landmarks early with flying colors,” Clawson said.

The Demon Deacons have turned to Brad Lambert as defensive coordinator for his second stint with the program.

Lambert replaces Lyle Hemphill, who left to work under new Duke coach Mike Elko. He coached under former Demon Deacons coach Jim Grobe from 2001-10, which spanned the team’s run to the 2006 ACC title.

He worked as Grobe’s defensive coordinator in his last three seasons before becoming head coach at Charlotte. The team also brought in new coaches in James Adams (safeties) and Glenn Spencer (linebackers).

The Demon Deacons have thrived with clean execution that generally avoids turnovers and ill-timed penalties.

Wake Forest finished tied for 17th in the Bowl Subdivision ranks last year with a plus-9 turnover margin. That marked the fifth time they finished in the top 25 nationally during their current six-year bowl streak.

The Demon Deacons open with a Thursday night home game against VMI on Sept. 1 and host fourth-ranked Clemson on Sept. 24 in Wake Forest’s league opener.

They largely stay in their home state for the final month, including a visit No. 13 N.C. State (Nov. 5) in a matchup that largely decided last year’s division race before closing at Duke on Nov. 26.