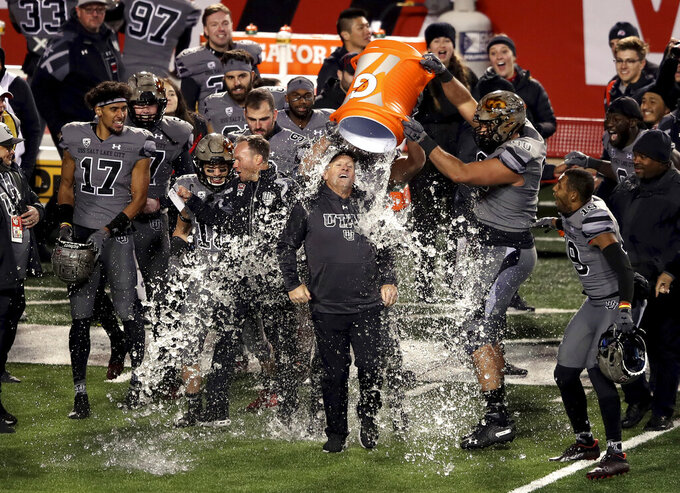 Neither Oregon nor Utah will finish high enough in the College Football Playoff rankings to earn a bid. It means that the Pac-12 will not send its champion to the playoff for a fourth consecutive season.

“It hurts because there were a lot of expectations,” Oregon quarterback Anthony Brown said. “The potential was there, and we didn’t maximize. We didn’t grab the opportunity that was right in front of us.”

The No. 4 Ducks never really had a chance against the Utes after no. 24 Utah scored 14 points in the final 27 seconds before halftime to take a four-touchdown lead. Britain Covey returned a punt 78 yards for a touchdown on the final play of the first half.

“It really was a tough situation for them coming out and being down 28-0,” Utes coach Kyle Whittingham said. “That was really the biggest portion of the game and the thing that really give us a ton of momentum.”

Thomas has run for a Utah-record 17 touchdowns this season. The previous mark was 15, shared by Zack Moss and John White IV.

Cameron Rising threw for 178 yards. His top target, Brant Kuithe, piled up 118 yards on five catches for just the second 100-yard game of his career. Covey had 191 all-purpose yards.

Utah converted 11 of 14 third downs and finished with 386 total yards.

“Our biggest thing was just owning the line of scrimmage,” Utah linebacker Devin Lloyd said. “We weren’t going to try to switch up our scheme or do anything special.”

The Ducks now face a must-win situation against Oregon State in seven days to clinch the Pac-12 North title and guarantee a title game rematch with Utah in two weeks.

Everybody’s upset and disappointed like we should be,” Ducks coach Mario Cristobal said. “It should burn. It should hurt a ton. These guys are competitors and it’s hard because we’ve taken a lot of pride in being resilient and being able to bounce back from adversity.”

On its only scoring drive of the first quarter, Utah ran the ball 11 times on 13 plays — culminating in a burst up the middle for 10 yards from Thomas.

Rising found a rhythm on Utah’s next scoring drive. He completed three straight passes to open the drive and capped it off by dancing across the goal line on a 1-yard run in the second quarter.

His biggest pass in the first half — a 49-yard catch and run by Kuithe — set up a 4-yard scoring run by Thomas that put Utah ahead 21-0 with 27 seconds left in the half.

The Utes forced another Oregon punt 16 seconds later, and Covey returned it for the TD to make it 28-0.

Oregon finally got on the board in the third quarter when Devon Williams reeled in a 36-yard catch. Utah ended any possibility of a comeback when Thomas sprinted 5 yards for his third touchdown. Jadon Redding tacked on a 26-yard field goal to put the Utes up 38-7 midway through the fourth quarter.

Oregon: Aside from a 50-yard catch by Kris Hutson, the Ducks did hardly anything noteworthy against Utah’s defense until the third quarter. Oregon’s inability to move the chains kept it off the board in the first half and ultimately crushed the Ducks’ hopes of going to the College Football Playoff.

Utah: The Utes did practically everything right on offense in the first half. Utah converted 8 of 10 third downs and averaged 6.1 yards per play. As well as the Utes’ offense played, the defense did an even better job of grounding the Ducks when it mattered.

Oregon will take a tumble in the latest AP Top 25 Poll and Utah should see a big jump.