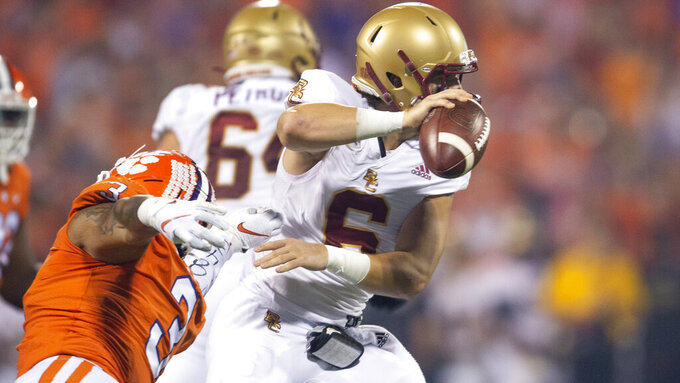 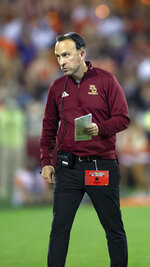 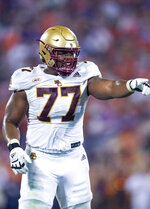 “The defense, we're some fighters,” Henry said. “We're excited about attacking every chance we get.”

Henry's belief was rewarded as he pounced on a mishandled snap by quarterback Dennis Grosel with 47 seconds left to preserve the Tigers' latest escape, 19-13 at home Saturday night.

Clemson has won 31 straight at home despite the suddenly stagnant offense held to a first-quarter touchdown. They have won 11 in a row over Boston College (4-1, 0-1).

“Not beautiful, but we needed a win,” Clemson coach Dabo Swinney said.

The Eagles were among the ACC's surprise teams with their first 4-0 start in 14 years. They just couldn't make much happen against the Clemson defense.

When BC's Nate Okpala blocked a punt in Clemson territory early in the third quarter, the responded with a three-and-out.

In the fourth quarter, the Eagles drove to the Clemson 43. But Grosel bobbled the snap on third down and lost 16 yards.

And then came that final mistake as they drove for the go-ahead touchdown. Grosel said he tried to hurry up and snap and was looking the play clock when the ball came at him. “I took my eye off it for a second,” said Grosel, who passed for 311 yards and two interceptions.

Clemson had hoped to break out of a season-long offensive funk where its has scored just 57 points combined against its four Power Five opponents this year.

“Their will to win,” Swinney said, “is special. It's special.”

The Tigers sure looked headed in that direction early on with sophomore tailback Kobe Pace broke off a 59-yard TD run — Clemson's longest play of the season.

The Tigers drove inside the Boston College 25 twice more in the opening half, once to the 2. But had to settle for Potter's field goals both times.

Clemson offensive coordinator Tony Elliott is trying not to complicate the attack with so many new faces in the lineup.

“We're try to keep things simple until we really kick in,” Elliott said.

The offense's struggles weren't helped by the early departures of two of their three leading receivers. Receiver Justyn Ross, the leader with 22 catches coming in, was walked to the locker room in the second half. Swinney said Ross took a shot to the head and they shut him down.

Tight end Davis Allen, third in the receiving list, was ejected for targeting on his punt return tackle.

It was the second straight season Boston College was in position for the upset and came up short. The Eagles led by 18 points in second half before falling 34-28 in what was Clemson's biggest comeback in Death Valley history.

Pace finished with 125 yards on 19 carries for the Tigers, who rushed for 231 yards. Joe Ngata had four catches for 111 yards.

Boston College: The Eagles gave Clemson everything it had. Grosel, though, had too many overthrows and missed connections in the biggest moments. Boston College came in averaging 220 yards rushing this season. It was held to just 46 by the Tigers.

Clemson: Again, this wasn't pretty for Clemson's offense and first-year starter D.J. Uiagalelei. Still, the Tigers did enough to leave with a victory. Uiagalelei was 13 of 28 for 207 yards. It was the third game this season where Clemson didn't have a TD pass.

Clemson's run in the Top 25 seems in jeopardy with another subpar offensive showing. The Tigers were 15-point favorites coming in. Clemson had spent 97 weeks in the Top 10 before a 27-21 overtime loss at North Carolina State a game ago dropped it down. They've been ranked in the past 113 polls dating back to 2015.

Clemson celebrated the 40th anniversary of its first national championship squad in 1981. The group featuring coach Danny Ford was honored in the opening half as the packed house at Death Valley stood and cheered. The Tigers have also won two additional national titles in 2016 and 2018.

Boston College is off next week before playing at home against North Carolina State on Oct. 16.

Clemson has a week off before playing at Syracuse on Friday, Oct. 15.