Oklahoma picks up pieces after Lincoln Riley leaves for USC 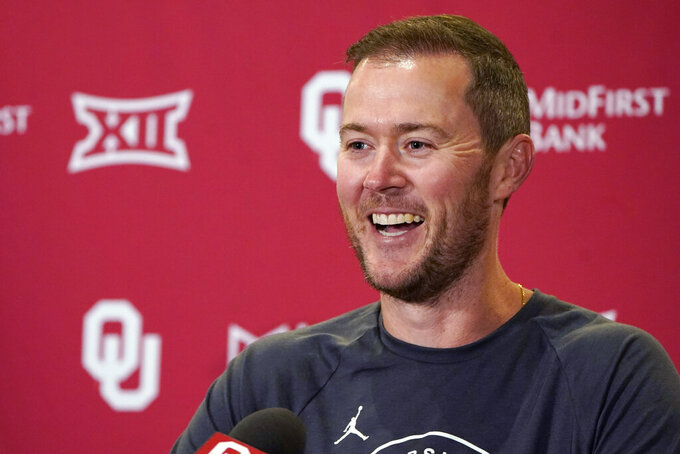 Many of their comments followed a consistent theme: No one person is bigger than the Oklahoma program. Sure, the 38-year-old Riley compiled a 55-10 record in five seasons at Oklahoma. And under his tutelage, Baker Mayfield and Kyler Murray both won Heisman Trophies and were No. 1 overall picks in the NFL draft.

But Oklahoma has seven national titles and seven Heisman winners and is coming off a string of six straight Big 12 titles.

Stoops, who coached at Oklahoma for 18 years, knows the history as well as anyone. In his only head coaching job, he went 190-48 (.798), including a national title run in 2000. He retired abruptly in 2017, making way for Riley to take over. He will be inducted into the College Football Hall of Fame next month.

Stoops reassured the players that Oklahoma would remain elite.

“It’s okay. You’re the ones who are going to go make all the plays — or not make the plays,” Stoops told them. “You guys win or lose. You’re OU football. He (Riley) isn’t. I’m not. Any other coach who comes here isn’t. OU football has been here a long time, and it isn’t going anywhere else. It’s going to be here and it’s going to be at the top of college football and is going to continue that way.”

Still, Riley's decision was just the beginning of steady chaos. Quarterback Spencer Rattler announced Monday that he is entering the transfer portal. And five-star quarterback Malachi Nelson, one of the top prospects in the class of 2023, is just one of several players to decommit to the Sooners.

“We get it,” Castiglione said. “It’s a tough thing to learn. And there’s a variety of emotional responses that come with it. And people want to be able to step back, exhale, consider whatever options might come their way."

Rattler's leaving is significant. He was a five-star prospect and the top high school quarterback in the class of 2019. After a successful 2020 season, he entered this season as a potential Heisman Trophy candidate. But he struggled at times to move the team and was booed by the home fans during a close call against West Virginia.

He was benched after a slow start against Texas, and Caleb Williams took over and rallied the team to victory. Williams kept the starting job, though Rattler eventually regained favor with the fans. For the season, the Phoenix native completed 75% of his passes for 1,483 yards with 11 touchdowns and five interceptions.

Stoops said he's already having conversations with players about the portal.

“There’s going to be all of that, and some will (enter the portal)," he said. “I’ve already had guys come to me who have said ‘coach, I want to play in the bowl game, but I want to look at the portal just in case someone hired doesn’t fit me. You know, doesn’t work.’ So I understand. But that doesn’t mean that they’re all looking to leave.”

Castiglione has considered the fact that with transfers immediately eligible, some Oklahoma players could join Riley at USC.

“In the end, we don’t know what’s going through every player’s mind, but of course we’ve thought of it," he said. “And we’ve been very positive as they have and very open in our communication with the types of thoughts and the thought process that they might have.”

Castiglione offered no information about a timetable or prospects to replace Riley.

“We’re moving as quickly as possible,” he said. “We understand the dynamics of it and we’re using every means possible to be thorough. We understand the most important thing is find the right and great head coach. We’ll move at the appropriate speed.”