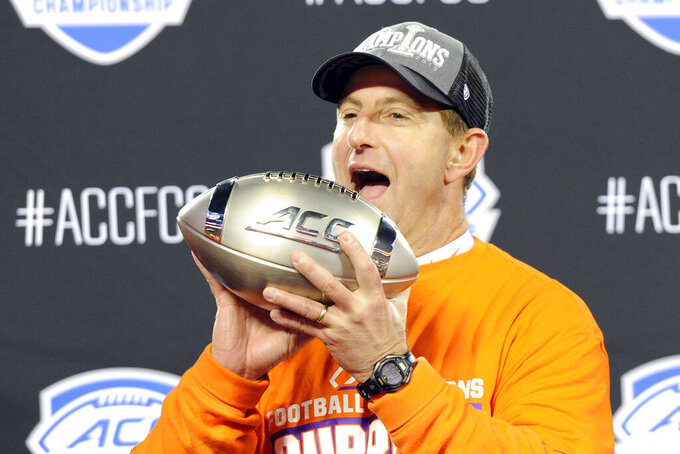 Former Clemson athletic director Terry Don Phillips made a deal with Dabo Swinney when he decided to make him the Tigers head football coach.

Phillips has been retired since 2013 and is hailed as a visionary for seeing the potential in Swinney. The Tigers are 129-30 since Phillips promoted the then-39-year-old wide receivers coach.

This College Football Playoff shows that sometimes the best person for the job is someone already in the building.

On Saturday at the Fiesta Bowl in Glendale, Arizona, Swinney and No. 3 Clemson plays No. 2 Ohio State and first-year Buckeyes coach Ryan Day, who was promoted from offensive coordinator after last season to replace Urban Meyer.

The other semifinal at the Peach Bowl in Atlanta matches No. 1 LSU and No. 4 Oklahoma, schools that also hired from within the last time they were looking for a head football coach.

LSU's Ed Orgeron took a similar path as Swinney, being named interim coach after a midseason firing and then given a long-term contract amid skepticism about his abilities. The Tigers are 32-7 in three full seasons under the 58-year-old Orgeron.

Ohio State's promotion of the 40-year-old Day mimicked what Oklahoma had done 18 months earlier when Bob Stoops surprisingly stepped down in June 2017.

The Sooners smoothly transitioned to Lincoln Riley and have gone 36-5 with three Big 12 championships and three playoff appearances in his three seasons.

“You know, that was our circumstance,” Ohio State athletic director Gene Smith said. “We really built very good support systems for our football program and set up some good structure. And so when you have somebody in-house that you have a chance to kind of audition, so to speak, it allows you to hire from within and not have somebody come in and, frankly, they want to try and change a lot of things. We didn't need anything changed.”

Day arrived at Ohio State in 2017 after a stint in the NFL, hired by Meyer to be co-offensive coordinator and quarterback coach. It was the next step in Day's goal of one day leading a program and Smith said he considers it his job to help assistants with head coaching aspirations to reach those goals.

“So Ryan, for example, he wanted to be a head coach. I'd hoped one day at Ohio State, but I didn't know that for sure. So I had him meet with our president," Smith said.

Day was thrust into the job under unusual circumstances last season. He was named acting head coach for the first three games of the 2017 season after Meyer was suspended by the university for his handling of an assistant coach who had been accused of domestic violence.

The Buckeyes went 3-0 under Day, and when Meyer stepped down after the season Day was the obvious choice.

Riley also demonstrated his leadership abilities at Oklahoma as an assistant.

OU athletic director Joe Castiglione said he identified Riley as a possible successor to Stoops in the spring of 2015 after being hired as the Sooners offensive coordinator.

Castiglione saw Riley connect with players in an uncanny way during a tumultuous time on campus that followed a video of a fraternity's racists chants becoming public.

“I asked (Stoops) directly, ‘Is it just me? Am I overreacting or seeing something uniquely special in this guy? Or is it real?’ And he said, ‘Oh, no. It’s definitely real,'” Castiglione said.

Castiglione figured Riley would move on to a head coaching job at another school and, hopefully, down the road he would be able to hire him back to replace Stoops.

Instead, having Riley around made it easier for Stoops to step away at age 56 .

“What you're looking for in your head coach is a leader. And statistics aren't necessarily going to demonstrate that,” said Bob Lattinville, a St. Louis-based attorney who represents and advises athletic directors and coaches. “The only way to know that is to actually experience the guy.”

At Clemson and LSU, the transitions were bumpier because Swinney and Orgeron replaced coaches who were fired.

Lattinville said it's almost impossible for athletic directors to make an internal hire after a coach is fired.

"Essentially, what you're saying is everything else is fine, but it's just that the head coach was the problem," Lattinville said. "And that's really rarely the case.”

LSU fired Les Miles four games into the 2016 season. Under Miles, the Tigers won a national title and played for another during 11-plus seasons. But they were 19-10 over his last 29 games, including 10-8 in the Southeastern Conference.

Orgeron had been brought in a year earlier as defensive line coach and a possible antidote to the staleness.

LSU went 6-2 under Orgeron to finish 2016. While many LSU supporters were hoping for a splashy hire, maybe some up-and-coming young coach like Tom Herman — who was at Houston at the time — Alleva thought Orgeron had what LSU was missing.

“There wasn't the passion that you need to play at a championship level,” Alleva said. “And Ed brings that every single day. He has so much energy and passion. It's just contagious throughout the program.”

Orgeron had been a head coach at Mississippi and failed, but Alleva saw a coach who had learned from his mistakes.

None of the coaches in these playoffs have had Swinney's success.

Though Swinney had never been more than assistant when Phillips fired Tommy Bowden after six games in 2008 and made him the interim coach.

Swinney had been on staff since 2003. Phillips noticed players flocked to Swinney, and not just the receivers he coached. Also, recruiting had picked up after Swinney was given more responsibilities in that area.

While Clemson conducted a national search, ultimately Phillips went with the person he knew best.

And on Saturday in Arizona, Phillips will be in attendance to watch Swinney pursue a third national championship for Clemson.