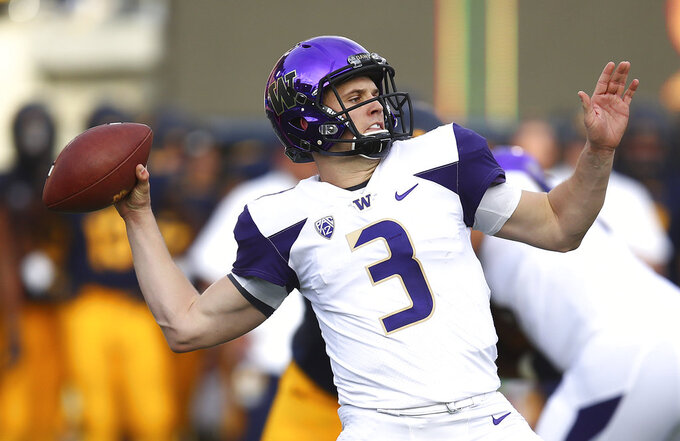 SEATTLE (AP) — Chris Petersen tried to make it clear Monday that his decision to bench quarterback Jake Browning during Washington's loss to California was an attempt to spark the Huskies' sluggish offense and not an indictment of his fourth-year senior quarterback.

"We've been kind of plodding along on offense here for the last few weeks. Not necessarily because of Jake's fault, but you've got to try and do something," Petersen said. "You've got to try some stuff in practice and you try some things in games. Defense is playing really well and you still think you're going to be able to score more than 10 points no matter who you put in there. That was the thought behind it."

Washington's 12-10 loss to California on Saturday was among the bigger shocks of the Pac-12 season in part because of the inability of the Huskies (6-3, 4-2 Pac-12) to do anything on offense. After scoring a touchdown on their opening possession, the Huskies had just one drive the rest of the game that went for more than 40 yards. Washington's 250 total yards and 13 first downs were a season worst, as was the 26:47 in time of possession.

Yet, the Huskies were still leading 7-6 late in the third quarter when Petersen benched Browning for two series and allowed redshirt freshman Jake Haener to take over. On his second pass, Haener was intercepted by Cal's Evan Weaver, who returned it 37 yards for the deciding score. Browning returned later in the fourth quarter, but the Huskies were unable to overcome the one major mistake.

Petersen noted the Huskies aren't getting big offensive plays or easy scores of late, and most of their scoring drives are long and plodding.

"You'd like to get some explosives in there where guys break tackles and make some things happen and that's really hard to do," Petersen said. "But that seems to be a little bit of who we are right now. We're working hard to change that. For whatever reason, we have little margin for error."

It's the second time in three weeks that Petersen's decisions have placed a redshirt freshman in a difficult situation, with the Huskies coming out on the losing end both times. In the Huskies' last road game at Oregon, Petersen stopped the offense from running another play in the final 40 seconds rather than trying to get closer to the end zone, leading to a redshirt freshman attempting a 37-yard field goal on the final play of regulation. Peyton Henry missed the kick and Washington lost in overtime to the Ducks.

This time, Washington was clinging to a one-point lead when Petersen turned to Haener.

"Jake Browning is our quarterback, but Jake Haener does some different things. He does," Petersen said. "I was just trying to create that spark for our offense. It's good for other guys to get reps in real-life situations and I know people are saying that's a tough situation to put a guy. ... He was itching for it. There was no hesitation. He made a bad, kind of a missed throw where he could have come off a little bit, the receiver didn't help him on where he was route-wise, talking about that interception. But we'll all learn from it."

Petersen said Monday that Browning would be the starting quarterback when the Huskies host Stanford on Saturday in what's become a loser-out game in the Pac-12 North Division race. The loser will have three league losses. Only Washington still has a direct path to the division title without needing help. The Huskies still have to close the season at division-leading Washington State.

"It's not even worth talking about," Petersen said of the division race. "I've said it forever. We control everything. We control our happiness. We control how we practice. We control our improvement. All those things. That's just always the message."