Ridder helps No. 8 Bearcats rally for 38-24 win at Indiana 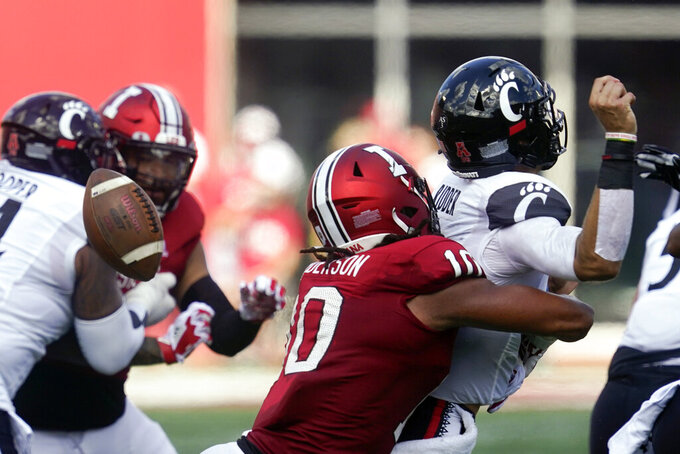 Cincinnati quarterback Jack Perry (10) fumbles as he is hit by Indiana's Ryder Anderson (10) during the first half of an NCAA college football game, Saturday, Sept. 18, 2021, in Bloomington, Ind. (AP Photo/Darron Cummings)

He reverted to form in the second half -- and so did the Bearcats.

The senior threw two touchdown passes and ran for another in the final 30 minutes, helping No. 8 Cincinnati rally for a critical 38-24 victory at Indiana on Saturday.

“This is huge. I feel like it’s a weight lifted off our shoulders,” Ridder said. “People talk about checklists and what you’ve got to do and that’s a check mark off the list."

It's one. But the bigger one could come in two weeks when the unbeaten Bearcats visit Notre Dame for a showdown that could provide momentum for their playoff hopes.

Without Ridder's resilience, those aspirations could have ended in Bloomington. His two first-half turnovers, an interception and a fumble, allowed Indiana to build a 14-0 lead in front of its largest home crowd for a non-conference game, 52,656, since September 1987.

But the momentum swung when Ridder took a big hit on third-and-10 late in the first half. A replay review resulted in a targeting call and the ejection of Hoosiers linebacker Micah McFadden, giving the Bearcats a rare first down.

“We were dominating them till that point," Indiana coach Tom Allen said. "He’s our leader, he’s part of our pressure, he makes a lot of tackles, and when you lose a guy like that, that’s tough.”

The Bearcats sensed it, too, and Ridder wasted no time taking advantage by leading the Bearcats (3-0) to their first score. They added a field goal before halftime and Cincinnati finally took the lead on Jerome Ford's second TD run, a 3-yarder midway through the third quarter.

Indiana answered with a 14-yard scoring run from D.J. Matthews Jr. Tre Tucker gave Cincinnati a 23-21 lead with a 99-yard return on the ensuing kickoff, b ut when the Bearcats missed the extra point the Hoosiers regained the lead with a 49-yard field goal.

Ridder took care of the rest.

He threw a 19-yard TD pass to Alec Pierce for the go-ahead score with 12:13 remaining, scored on a 7-yard run with 2:37 to go and completed a 2-point conversion pass to seal Cincinnati's big win.

Cincinnati: Fickell was worried about this season's first road trip — and with good reason. The Bearcats had five false starts and two turnovers in the first half. But Cincinnati cleaned things and rallied in the second half.

Indiana: Losing McFadden, a captain changed everything, for the Hoosiers' defense. Add their red-zone struggles, three turnovers and the special teams breakdown and it was the perfect combination for a loss.

Cincinnati: The voters may dock the Bearcats for lacking style points, which could cause them to slide a little — but not too far.

Indiana: The Hoosiers needed a win to return to the rankings. Their next chance could come in two weeks.

Cincinnati: Ridder was 20 of 36 with 210 yards, one touchdown and one interception. He also ran 10 times for 45yards and lost a fumble. ... Pierce had five receptions for 86 yards. ... Linebacker Darrian Beavers left briefly in the first half but forced and recovered a fumble to stop one Indiana scoring threat and sacked Michael Penix Jr. to start Indiana's second-to-last possession.

Indiana: Penix was 17 of 40 with 224 yards, two TD passes and three interceptions. He's been picked off three times in each of the Hoosiers' losses. He did not take questions after the game because he was having X-rays on his throwing arm, which he hurt during the game. ... Stephen Carr rushed 21 times for 52 yards and scored on 5-yard TD reception. ... Matthews had five receptions for 120 yards, the second 100-yard game of his college career. ... Peyton Hendershot caught six passes for 60 yards and one TD.

Cincinnati: The Bearcats have a bye week, then head to No. 12 Notre Dame on Oct. 2.