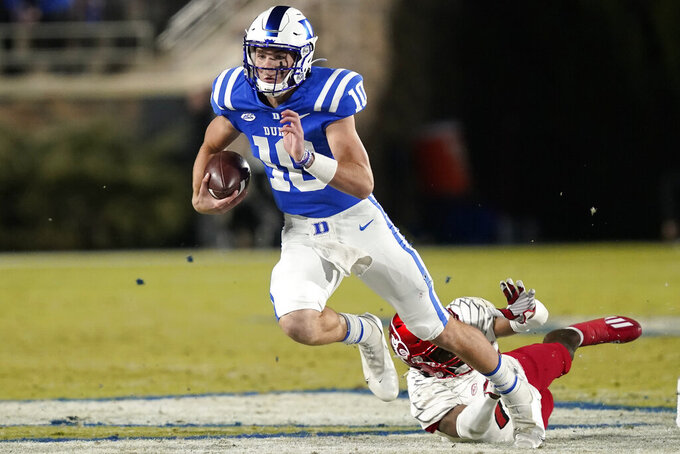 Line: Duke by 7 1/2, according to FanDuel Sportsbook.

Two programs with first-time head coaches meet to open the season. Duke is led by Mike Elko, who left the Texas A&M staff to replace longtime Blue Devils coach David Cutcliffe. The Owls are led by Stan Drayton, who had previously worked as associate head coach at Texas. Duke said it marks only the fourth time since 1982 that two first-time head coaches will make their debuts against one another.

Temple's offense against Duke's defense. The question is which of these two units that ranked among the worst in the Bowl Subdivision last year has made the most progress. The Owls ranked 125th out of 130 teams in total offense (287.4) and tied for 126th in scoring (16.3). The Blue Devils ranked last in total defense (517.9) and 127th in scoring defense (39.8). The intriguing part is that Drayton has spent his career working on the offensive side of the ball, while Elko has worked as defensive coordinator most recently with the Aggies, Notre Dame and Wake Forest.

Duke is minus-26 in turnover margin the past two seasons, including a national-worst 39 turnovers in 2020. ... Temple offensive lineman Peace Addo transferred in after four seasons at Duke. ... Duke has lost 23 of 29 games dating to October 2019, including 21 of 23 in the Atlantic Coast Conference. The Blue Devils closed the Cutcliffe era with eight straight losses. ... Temple lost its last seven games last year, each by at least 20 points. The Owls had been bowl eligible six straight seasons before the COVID-19 pandemic. ... The only other meeting came in the 2018 Independence Bowl, won by the Blue Devils 56-27. ... The Blue Devils have lost three straight season openers. The Owls have lost five of six.