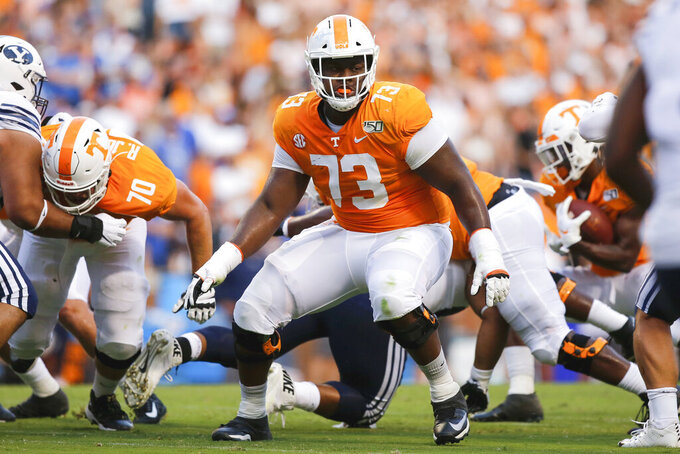 KNOXVILLE, Tenn. (AP) — Tennessee offensive guard Trey Smith says he will return to school for his senior year after making a successful comeback from a career-threatening medical issue to earn first-team, all-Southeastern Conference honors this past season.

Smith played all 13 games for Tennessee and made 12 starts at left guard. Smith, who says he's on track to graduate in May, indicated the NFL draft advisory board had recommended that he return to school.

“I think there are major things that I can increase and do better at, be a lot more consistent with my game,” Smith said at a Thursday news conference. “I want to attack those areas and do better.”

Blood clots were found in Smith’s lungs in February 2018, causing him to miss that year’s spring practice. He went on blood thinners and was eventually cleared but missed the final five games of that season after school officials said doctors again had found blood clots in his lungs.

Tennessee team physician Chris Klenck clarified that Thursday by saying that Smith had displayed “symptoms that were somewhat worrisome for a recurrent blood clot episode” but that additional tests have made them confident the issue wasn’t a recurrence after all.

Smith was cleared just before the 2019 season after doctors formed a plan designed at minimizing his risk for a recurrence of the blood clots while still allowing him to play. Klenck said some fine-tuning and adjusting will be made to the plan prior to the 2020 season.

Tennessee coach Jeremy Pruitt said Smith has practiced in full pads just twice over the last 12 months. Pruitt said doctors have indicated it might be possible for Smith to have one day of full-contact practice per week next season.

Smith believed playing one more full season in college could help answer any questions NFL teams have about his long-term health issues.

The return of Smith boosts a Tennessee offensive line that also should have center Brandon Kennedy back for a sixth season of eligibility. Tennessee went 8-5 and won its final six games of the 2019 season, including a 23-22 Gator Bowl triumph over Indiana.