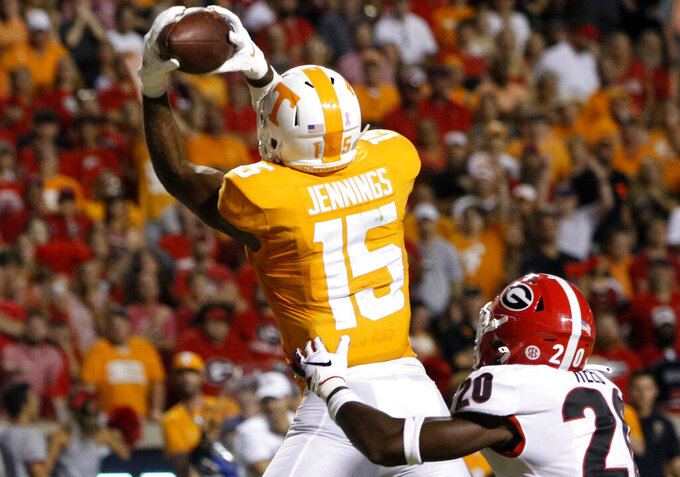 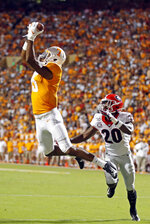 KNOXVILLE, Tenn. (AP) — Tennessee's chances of succeeding with a freshman quarterback likely will depend on how well he works with his senior receivers.

The early returns in that regard seem encouraging, as Tennessee freshman quarterback Brian Maurer has built an immediate rapport with Jauan Jennings and Marquez Callaway.

In Maurer's first career start last week, Jennings and Callaway each accumulated over 100 yards receiving. Tennessee hadn't had two players produce 100-plus yards receiving since Justin Hunter and tight end Mychal Rivera did it in an overtime loss to Missouri on Nov. 10, 2012.

Although Tennessee still lost 43-14 to No. 3 Georgia, Maurer's ability to get the ball to his top playmakers at least offered the Volunteers (1-4, 0-2 SEC) some encouragement as they prepare for Saturday's home game with Mississippi State (3-2, 1-1).

"He just came in really wanting to play," Callaway said after the Georgia game. "He finally got his shot and he took full advantage of it."

Tennessee is off to its slowest start since 1988, when the Vols dropped their first six games before surging down the stretch to finish 5-6. For Tennessee to produce a similar turnaround this season, Maurer must continue connecting with the Callaway-Jennings duo as often as possible.

The two senior wideouts are the leaders of Tennessee's offense, as they've combined for 25 career touchdown catches and 51 starts. One of the few matchup advantages Tennessee often enjoys over an SEC foe comes when the 6-foot-3 Jennings and 6-2 Callaway line up against opposing cornerbacks.

"They're always keeping the tempo up, the energy," freshman offensive tackle Wanya Morris said Tuesday. "Jauan and Marquez are like the best duo I've ever seen. They keep the energy up in practices, games, workouts. You can always count on them to keep your head up."

Morris said that continued Saturday in how Jennings and Callaway approached Maurer.

"They just said, 'Play your game, you know, just relax,' " Morris said. "They talk to everybody before the game. That's how good a leader they are."

Maurer responded by going 14 of 28 for 259 yards and throwing touchdown passes to Callaway and Jennings. Tennessee coach Jeremy Pruitt said Maurer will likely remain the starter against Mississippi State as long as he has a good week of practice.

Perhaps the best thing Maurer has shown is his ability to find Jennings and Callaway.

Jennings has been Tennessee's best player all season. He's a fan favorite for his connection to Tennessee's biggest recent highlights, which include catching a go-ahead touchdown pass in a 2016 victory over Florida and delivering a Hail Mary reception to beat Georgia a week later.

The fifth-year senior had a career high in yards receiving (114) and matched a career high in catches (seven) in Maurer's first start. Jennings also produced a memorable 21-yard gain in which defenders were draped over his body for about the last 10 yards.

"He is an ultimate competitor," Pruitt said. "He competes every day. The guy loves the University of Tennessee. We need more guys like him."

Callaway's emergence was an even bigger development.

He had just 10 catches for 154 yards through the first four games of the season with Jarrett Guarantano as the starting quarterback. In Maurer's first start, Callaway had three receptions for 105 yards, including a 73-yard touchdown in which he caught the ball around the Georgia 30 and ran into the end zone.

"That's a receiver's dream, to be running and then catching the ball in stride and scoring," Callaway said.

Those types of plays are creating at least a little optimism in what's been a nightmare of a season for Tennessee.