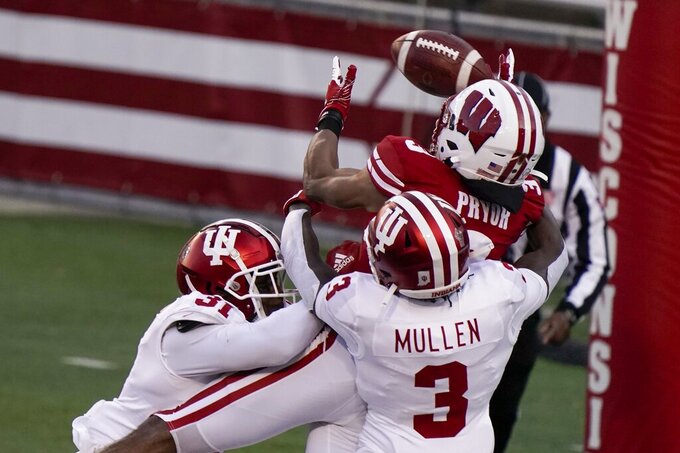 Indiana defensive back Tiawan Mullen (3)and defensive back Bryant Fitzgerald (31) break up a pass intended for Wisconsin's Kendric Pryor during the first half of an NCAA college football game Saturday, Dec. 5, 2020, in Madison, Wis. (AP Photo/Morry Gash)

MADISON, Wis. (AP) — Indiana made sure the loss of its star quarterback didn't interfere with its emergence as one of the Big Ten’s top teams this season.

These Hoosiers play some pretty stout defense, too

Jack Tuttle threw two touchdown passes in his first career start and Indiana’s defense made a stand in the final minute as the 10th-ranked Hoosiers outlasted No. 18 Wisconsin 14-6 on Saturday. Tuttle was starting in place of Michael Penix Jr., who tore his anterior cruciate ligament in a victory at Maryland last week.

“I think most people wrote us off because we lost Michael Penix, who is a special player. But we are a football team," Indiana coach Tom Allen said, putting special emphasis on his final word.

Indiana tied a program record Saturday by earning its sixth Big Ten win of the season, joining the 1967 and 1987 teams. The Hoosiers (6-1, CFP No. 12) also snapped a 10-game skid in this series and beat Wisconsin for the first time since 2002.

“It really feels amazing,” Tuttle said. "I’m so happy for this team. There are things we have to fix, but right now it just feels great.”

The victory wasn't secure until the final minute.

Wisconsin (2-2, No. 16 CFP) drove to Indiana's 17-yard line on its final possession, but a second-down sack from Micah McFadden pushed the Badgers back to the 21. After an incompletion, Wisconsin faced fourth-and-10.

Graham Mertz threw into the right corner of the end zone but couldn't connect with Chimere Dike, who was closely defended by Reese Taylor. The foiled fourth-down pass with 46 seconds left squashed the Badgers' last hope.

“I saw a one-on-one with Chim and trust that dude and love him with all my heart,” Mertz said. “Just trying to make a play. I saw him beat him off the line and just tried to put it on him. We didn't win that one, but I'm confident in his ability and I know we'll be getting those in the future.”

Jalen Berger rushed for 87 yards and Collin Larsh had field goals of 28 and 29 yards for Wisconsin, which lost its second straight despite outgaining Indiana 342-217. Mertz went 20 of 34 for 202 yards but also threw an interception and lost a fumble.

“As an offense, we just need to click better,” Wisconsin tight end Jake Ferguson said. “Our prep is good the whole week. We just need to execute on game day.”

Tuttle went 13 of 22 for 130 yards with a 1-yard touchdown pass to Peyton Hendershot and a 7-yard scoring strike to Whop Philyor. Tuttle also lost a fumble that led to a Wisconsin field goal.

Allen feared he might have to make a change when his quarterback took a hit from Jack Sanborn near the Wisconsin sideline early in the fourth quarter, but Tuttle remained in the game.

“He goes running into the locker so I’m thinking, I’m telling Dex (Dexter Williams), ‘OK, this is your time. This is why you came here,' " Allen said. ”And then all of a sudden, I see him (Tuttle) come running out and I was like ‘Yay, he’s back.’ "

The Badgers suffered a major blow early in the game when starting center Kayden Lyles was carted off the field with a leg injury, causing them to turn to freshman Tanor Bortolini. Wide receiver Kendric Pryor left with an upper-body injury later in the game.

Indiana entered the day with a Big Ten-leading 18 takeaways and used an early turnover to take the lead for good.

Wisconsin had moved the ball to the Indiana 39 when Tiawan Mullen sacked Mertz and knocked the ball loose. James Mullen recovered the fumble at the Indiana 47 to set up the Hoosiers' first touchdown.

Indiana extended the lead to 14-3 on the opening possession of the second half.

The Hoosiers squandered an opportunity early in the fourth quarter to pull away when Miles Marshall got well behind the Wisconsin defense but dropped what likely would have been a 57-yard touchdown pass.

Indiana: A season of milestones continues for the Hoosiers. A victory over Purdue next week would give them seven Big Ten wins for the first time ever. The ball-hawking defense forced two turnovers and showed a bend-but-don't break mentality all day as it continually stood tough whenever Wisconsin drove beyond midfield.

Wisconsin: After scoring at least 45 points in each of its first two games - lopsided victories over Illinois and Michigan - the Badgers have taken a giant step backward on offense to fall to .500. There won't be any Rose Bowl or Big Ten championship game appearance this year. The Badgers instead must focus on avoiding their first losing season since a 5-7 finish in 2001.