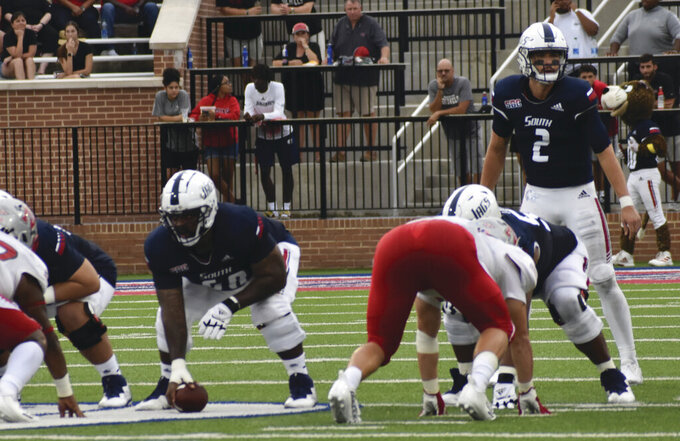 The South Alabama Jaguars offensive unit marches down the field with Quarterback Carter Bradley (#2) calling the plays and offensive center James Jackson (#68) preparing for the snap against Nicholls State on Saturday, Sept. 3, 2022 at the Hancock Whitney Stadium in Mobile, Ala. (Hunter Dawkins/The Gazebo Gazette via AP)

Line: UCLA by 15 1/2, according to FanDuel Sportsbook.

UCLA is seeking its first 3-0 start since 2015 and looks to go into Pac-12 play unbeaten. The Bruins have won five straight dating to last season and have averaged 47.6 points per game with each victory coming by at least 24 points. South Alabama is looking to become the fourth team from the Sun Belt Conference to beat a Power Five team on the road this season. Marshall and Appalachian State posted upsets against ranked teams Notre Dame and Texas A&M and Georgia Southern's win over Nebraska got Scott Frost fired.

South Alabama RB La’Damian Webb vs. UCLA RB Zach Charbonnet. Webb has rushed for at least 90 yards in the Jaguars' first two games along with four touchdowns. Charbonnet had 111 yards in the Bruins' opener against Bowling Green, his eighth 100-yard game with UCLA. He did not play last week because of injury.

UCLA: WR Kazmeir Allen. He leads the Bruins with 14 catches for 115 yards after having 17 receptions for 255 yards last season.

This is South Alabama's first game against a Pac-12 team. ... The Jaguars are averaging 43 points per game and are one of three teams from the Sun Belt Conference scoring at least 40 per game. ... UCLA has outscored opponents 90-24, including 35-0 in the second half. ... The Bruins are averaging 555.5 yards per game, which is second among Power Five teams. ... UCLA's defense has not allowed a run over 20 yards.