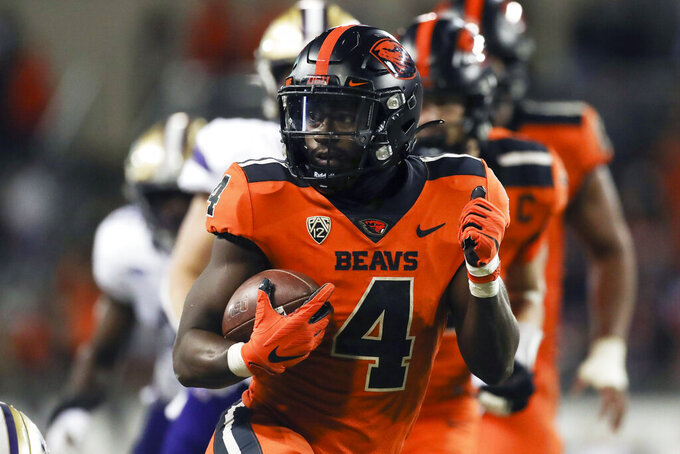 Oregon State running back B.J. Baylor (4) rushes for 27-yards to score a touchdown during the second half of an NCAA college football game against Washington on Saturday, Oct. 2, 2021, in Corvallis, Ore. Oregon State won 27-24. (AP Photo/Amanda Loman)

The last thing Jonathan Smith expects from his team is for Oregon State to suddenly become cocky or overconfident even if the Beavers are sitting on top of the Pac-12 North.

“This group understands that it’s hard to win,” Smith said. “That you’ve got to prepare well to win. This league, anybody can beat anybody. Hunted, hunting all of that. It comes down to 60 minutes on Saturday, preparing to be the best you can and know it’s going to be a fight.”

The next challenge for the surprising Beavers comes Saturday when they visit Washington State. Oregon State (4-1, 2-0 Pac-12) has won four straight since its season-opening loss at Purdue, and has overcome historical roadblocks in the past two weeks, winning at USC and last week knocking off Washington at home.

All that offensive punch comes without much impact from the passing game. Oregon State quarterback Chance Nolan throws for around 200 yards per game, but he completes 68% of his passes and has thrown for nine touchdowns with just three interceptions. Nolan struggled against Washington, completing only seven passes for a career-low 46 yards.

“They run unafraid and the quarterback does a nice job getting them to the plays they want,” Washington State coach Nick Rolovich said. “He has enough legs to scare you and there’s enough soundness to the passing game, and they know how to attack defenses.”

Washington State has posted seven straight wins over Oregon State. But the Beavers appear to have turned a corner under Smith, now in his fourth season. The Beavers are favored by 3.5 points.

The Cougars (2-3, 1-2) are coming off a sterling defensive effort in a 21-6 win at California, but their offense continues to sputter, ranked 10th in the Pac-12 averaging just 23 points per game.

“We need to keep pushing on the offense to put more points on the board,” Rolovich said.

Oregon State is shooting for its first five-game winning streak since 2013. Washington State leads the series 55-47-3.

Washington State receiver Calvin Jackson Jr. had a nifty one-handed catch against Cal. On third-and-goal from the Bears’ 5-yard line, quarterback Jayden de Laura floated a pass toward Jackson in the back corner of the end zone. Jackson twisted his body and hauled the ball in with his right palm, then tucked it away while tapping a toe inbounds. “When I saw the ball in the sky, I was like, ‘There’s no way I can get two hands on it, so let me see if I can maneuver my way to get one on it,’" Jackson said.

The Pac-12 honored Oregon State inside linebacker Avery Roberts as its defensive player of the week after his play in the Beavers’ win over Washington. Roberts had 16 tackles, a half sack and an interception against the Huskies.

WELCOME TO THE PAC-12

Washington State running back Max Borghi has seen his 2021 season slowed by injuries. He ran 13 times for 44 yards against Cal. For the season, Borghi still leads the Cougars in rushing with 303 yards and two touchdowns.