Young, No. 4 Alabama face stiff test from No. 1 Georgia's D 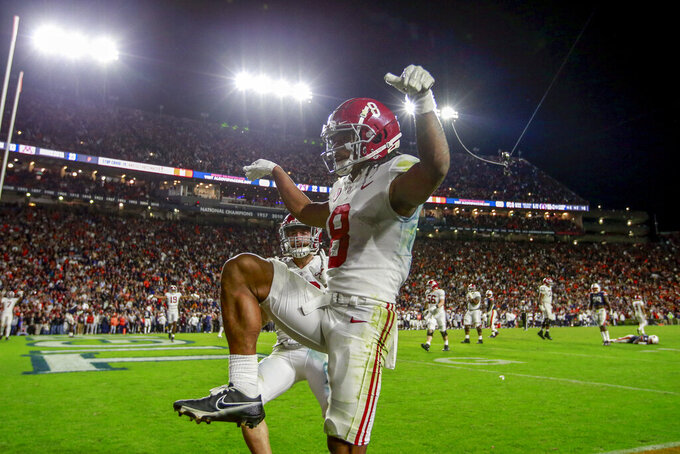 The going only gets tougher for Alabama’s normally explosive offense.

While the Crimson Tide was held out of the end zone for the first 59 minutes and 36 seconds by Auburn, now they face the nation's top defense.

Heisman Trophy front-runner Bryce Young and the fourth-ranked Crimson Tide are gearing up to square off against No. 1 Georgia on Saturday in the Southeastern Conference championship game.

Making matters more challenging, Alabama tailback Brian Robinson Jr. is nursing a left leg injury and his status is uncertain for the game. If he can’t play, that leaves Trey Sanders as the Tide’s only healthy scholarship running back against a defense allowing a nation’s best 6.9 points and 229.7 total yards per game.

Georgia's formidable front seven, led by defensive lineman Jordan Davis and linebacker Nakobe Dean, is also a huge challenge for an Alabama offensive line that has struggled at times.

Alabama didn’t come with its best for that Auburn game, even if the Tide ultimately turned a 10-0 fourth-quarter deficit into a 24-22 quadruple-overtime victory.

The Crimson Tide mustered just 68 yards on 30 first-half plays and allowed seven sacks in the game.

Young led Alabama to 217 fourth-quarter yards, including a 97-yard drive over the final 95 seconds.

The finishing flourish rescued the team’s playoff hopes and vaulted Young back to leading Heisman candidate status, according to FanDuel Sportsbook.

Leading receiver Jameson Williams also missed most of the game after a first-half targeting penalty in punt return coverage. The winning touchdown pass with 24 seconds left went to freshman Ja'Corey Brooks, just his fourth catch of the season and second of the game.

But Alabama still ranks seventh in passing and total offense, averaging 341.8 yards per game through the air and 492.2 overall.

Young has passed for 3,901 yards and 40 touchdowns against just four interceptions. He's completing 68.9% of his passes.

“It’s like he’s composed at all times and has great presence in the pocket, great distributor of the ball,” Georgia coach Kirby Smart said. "Knows where all his outlets are. Can draw the defense to him and dish the ball, much like a point guard in basketball.

“This is just one of the best I’ve seen as far as quick release and getting the ball out, distributing the ball really good.”

Then there's the backfield, where Saban said he has never been down to one scholarship runner. Others who moved to the position as emergency fill-ins, but that could be the plight his players face in this one if Robinson can't go.

Sanders has run for 221 yards and two touchdowns.

“We’ve got to get them ready to play the game,” Saban said. “There’s nothing else we can do about that. Injuries are a part of the game."

Alabama has leaned heavily on Robinson at times, but Young's biggest weapon has been Williams, along with fellow 1,000-yard receiver John Metchie III.

He also has plenty of faith in the Tide offense even facing by far its biggest challenge.