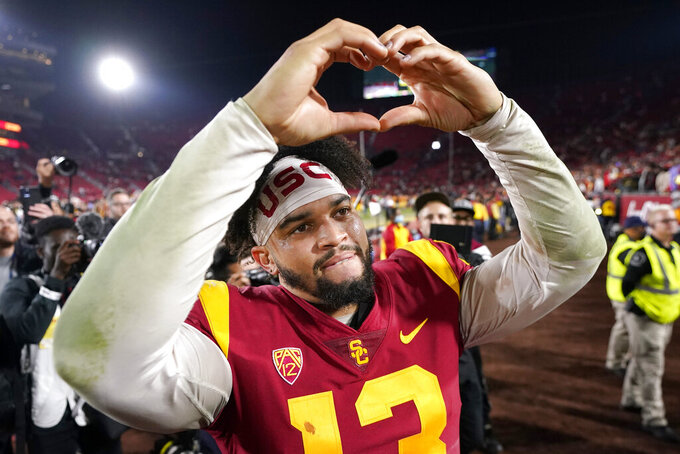 This is the way things go at the top of college football's food chain. If you can't win the most important game on your schedule, there will be questions about whether you are the right man for the job.

Day is 45-5 at Ohio State as Urban Meyer's replacement, but he is 1-2 against Michigan.

“We’ll figure out what’s next. I don’t know exactly what’s next right now, but that’s life at Ohio State,” Day told reporters. “When you lose, it all comes back to me as head coach. And that’s probably what hurts the most.”

What hurts most for Ohio State fans is The Game played out in a way that was supposed to be the second-ranked Buckeyes' advantage, a back-and-forth affair in which the quarterbacks needed to be difference-makers.

With star running back Blake Corum, the third-ranked Wolverines were able to transform from ground-and-pound into a big-play machine, ripping off five touchdowns that covered a total of 349 yards.

Meanwhile, Day was punting on fourth-and-3 from around midfield.

“In games like that, you have to play the field position game,” Day said. “I just feel like you’re not in those situations if you’re converting on third downs.”

Under Day, Ohio State has become a quarterback and wide receiver factory. C.J. Stroud almost certainly will become the third straight Buckeyes passer to be a first-round NFL draft pick next April.

Marvin Harrison Jr. is the best receiver in the country. He is part of a room full of blue-chippers that produced two first-round picks in the last draft.

The talent doesn't stop there. According to 247 Sports composite rankings based on recruiting stars, Ohio State has the third-most talented roster in college football behind Georgia and Alabama.

So, of course, it must be the coaching, right? And whether it truly is the coaching is not the point. Michigan (12-0) planted its flag right in the middle of Ohio State's block “O" at the 50-yard line after the game. Somebody is going to be held responsible for letting that happen.

Meyer never lost to the Wolverines. Before that it was Jim Tressel who flipped the rivalry the Buckeyes' way, going 9-1 against Michigan.

Ohio State fans have grown accustomed to the dominance over That Team Up North.

When Harbaugh arrived in Ann Arbor, Michigan, from the NFL as a potential savior for his alma mater's wayward football program, Wolverines fans hoped he could change their fortunes in The Game.

Instead, Harbaugh went 0-5. No matter that he rebuilt the program and pulled Michigan out of its greatest depths. At the top of his resume: can't beat Ohio State. And he was pilloried for it.

Not anymore. Michigan might not be the more talented team, but it certainly looks like the tougher team, the team that better handles adversity.

“This is a spiritual team,” Harbaugh said. “They're happy. They're celebrating, but they see bigger things.”

Next week, the Big Ten championship against Purdue awaits. Win that and Michigan makes its second straight College Football Playoff.

There is still a chance the Buckeyes can back into the CFP and maybe find redemption there. The selection committee seems to be running out of good options after Clemson also lost on Saturday.

This is not what Ohio State had in mind. Last season, after the defense melted down in big spots, Day lured coordinator Jim Knowles away from Oklahoma State to fix it.

Didn't work. At least not when it counted most.

So now Day, a coach with a mountain of accomplishments and a more than $9 million annual salary, is the one being judged for his failures and getting compared to former Buckeyes coach John Cooper.

Cooper is a Hall of Famer, but for Ohio State fans he is mostly remembered for this: 2-10-1 against Michigan.

HAND HIM THE HEISMAN

After a second straight brilliant performance on a big stage, Caleb Williams has the Heisman Trophy within his grasp.

USC's quarterback ran for three scores, made several amazing escapes and even dropped a Heisman pose as the Trojans beat No. 13 Notre Dame.

“My teammates told me to do it, and I did it after one of the touchdowns,” Williams said of flashing that familiar stiff arm.

The victory makes USC's path to the playoff straightforward. If the Trojans win the Pac-12 championship game, they're in. From 4-8 to 11-1 in coach Lincoln Riley's first season.

USC gets a rematch against No. 14 Utah next week after an epic meltdown by No. 10 Oregon at No. 22 Oregon State kept the Ducks from clinching a spot in the title game.

No. 12 Washington beat Washington State in the highest-scoring Apple Cup ever to send the Utes to Las Vegas.

No matter how things go there, it's hard to see the Heisman going to anybody but Williams.

He would be the eighth USC player to win the award and first since Reggie Bush in 2005.

He also would be the third Riley quarterback to win the Heisman, joining Baker Mayfield and Kyler Murray at Oklahoma.

Williams followed Riley to USC from Norman and together they have made Trojans football cool again.

“I stood right by and told you what our expectations were from Day 1,” Riley said. “A lot of people thought I was crazy and that's fine. ... It's been a run fun."

Going into championship weekend, the stakes don't look particularly high — at least when it comes to the College Football Playoff.

Undefeated No. 1 Georgia (12-0) is headed into the Southeastern Conference championship with its playoff position seemingly secured.

No. 6 LSU (No. 5 CFP) had hopes of pulling a big upset against the Bulldogs and becoming the first two-loss team to make the playoff. Then the Tigers got thumped by Texas A&M.

The SEC champ has never missed the playoff, but if LSU does pull off the improbable against Georgia, it will be the first.

At this point, the Big Ten and Big 12 title games don't look particularly meaningful either.

Michigan and No. 4 TCU (12-0) probably have earned the Georgia treatment, regardless of what happens next week.

The Horned Frogs will face No. 15 Kansas State, which blew an 18-point lead to TCU in the regular season.

If USC were to lose, then who?

Ohio State (11-1) didn't really look like a team deserving of a mulligan.

Clemson's chances went away with a loss to South Carolina. The Gamecocks stepped into the playoff race and played spoiler for the second straight week.

South Carolina followed up its victory against Tennessee last week with another against Clemson (10-2), giving it back-to-back victories against top-10 teams.

Hey, maybe Alabama's not out of it after all?

No. 25 UCF needed a late touchdown drive that included two of the best catches of the season to escape USF and earn a spot in the American Athletic Conference title game against No. 19 Tulane. ... For the first time since 1994, Minnesota gets to keep Paul Bunyan's Axe. The Gophers beat Wisconsin for the second straight year, but a 4-3 finish likely will be enough for Badgers brass to name interim coach Jim Leonhard to the permanent job early as Sunday. ... Soon after Oregon's collapse, news broke that Ducks offensive coordinator Kenny Dillingham was on the verge being named the youngest head coach in the Power Five by Arizona State. Dillingham, 32, is a Phoenix native and Arizona State graduate. ... The Iron Bowl didn't get as much attention as usual, unless you count all the speculation about Auburn's next coach. But let's take a moment to appreciate Tide quarterback Bryce Young, who likely played his last home game. Maybe even his last college game altogether. Young threw for 343 yards and three touchdowns against Auburn. He won't win another Heisman and he won't win a national title as a starter, but he undeniably has been one of the greatest players of the Nick Saban dynasty. ... Texas Tech beat Oklahoma in overtime to earn victories against the Sooners and Texas in the same season for the first time in program history. At 6-6, Oklahoma had its worst regular season since 1998, the year before Bob Stoops took over as coach.