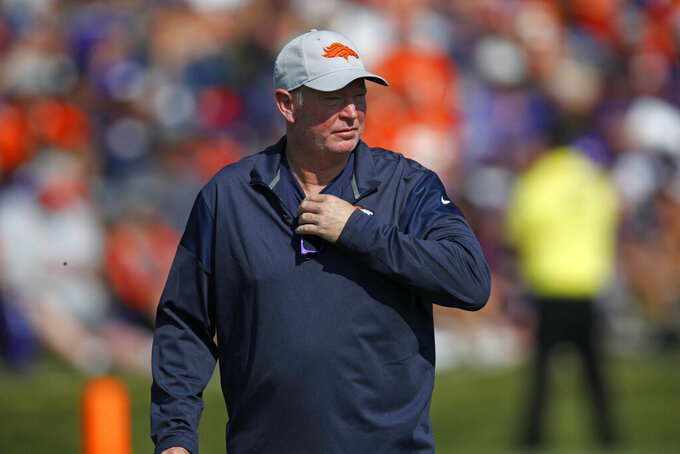 FILE - In this Aug. 4, 2018, file photo, then-Denver Broncos offensive coordinator Bill Musgrave takes part in drills at the team's headquarters during an NFL football training camp in Englewood, Colo. After a pandemic-shortened 2020 season, the California Golden Bears are excited to show off what they hope will be a much more dynamic offense with respected longtime NFL coordinator Bill Musgrave and veteran quarterback Chase Garbers. (AP Photo/David Zalubowski, File)

BERKELEY, Calif. (AP) — After a pandemic-shortened 2020 season, the California Golden Bears are excited to show off what they hope will be a much more dynamic offense with respected longtime NFL coordinator Bill Musgrave and veteran quarterback Chase Garbers.

Coach Justin Wilcox brought on Musgrave last season to build on a strong finish to 2019 only to have spring practice cut short after only a few sessions because of the COVID-19 pandemic. Then after an abbreviated offseason, the Bears managed to play only four games last season, with one canceled as they arrived at the stadium and another scheduled on short notice.

The results predictably weren’t very good as Cal won just one game and scored 20.3 points per game. That should change this season after a full spring practice and offseason.

“We’ve had a lot more time to communicate, meet, spend on football,” Wilcox said. “Any time you get that, you’re getting better and better every day. If you talk to Chase, he’d tell you the same thing. The comfort level has significantly improved.”

Garbers has fared well in his career when healthy. He has thrown for 4,049 yards in 24 career games with 34 TDs and 16 interceptions. Cal won all seven games in 2019 when Garbers was healthy but lost twice when he left early with injuries and went 1-3 when he didn’t play.

“I think Chase is primed for a great season. I really do,” Wilcox said. “He’s played a ton of football. Got a lot of different experiences. His comfort level in practice, his comfort level within the schemes, just operating. He’s confident. I think that just comes with age and time. Doesn’t always happen overnight. He’s had some really good moments. He’s learned a lot along the way.”

Garbers should be helped by an improved running game led by Christopher Brooks, who was previously known as Christopher Brown Jr. before changing his name to honor his mother. Brooks ran for 914 yards and eight TDs in 2019 but had just 21 carries last season because of injuries. Damien Moore and Marcel Dancy both showed flashes in his place and are also back this season.

Cal did get a boost from the pandemic-shortened 2020 with several players opting to return this season as super seniors led by safety Elijah Hicks, linebackers Cameron Goode and Kuony Deng, and cornerback Josh Drayden. That should give Wilcox plenty of needed experience on his defense.

The offense should be helped by the return of receivers Kekoa Crawford and Trevon Clark, and offensive lineman Valentino Daltoso.

The Bears have a big hole on their offensive line after center Michael Saffell announced just before the start of camp that he was retiring from football because of injuries. Saffell had started 23 games since arriving in 2017 and was an honorable mention all-conference pick last season.

Cal also had a big injury loss on the other side of the ball when defensive end Brett Johnson suffered a broken hip in a car accident that will sideline him for the entire season.

The Bears have a tough schedule with tricky nonconference games against Nevada and TCU to open the season and road trips to Washington and Oregon for two of their first three conference games. They leave the state of California just once in the second half for a trip to Arizona with three home games and visits to Stanford and UCLA during that stretch.