CFP committee digs into feasibility of early expansion to 12 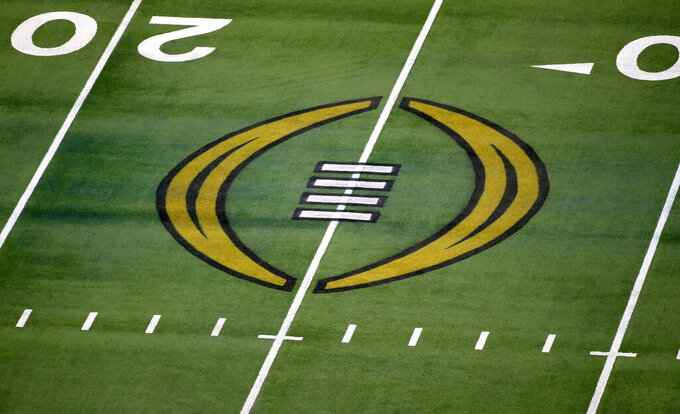 FILE - The College Football Playoff logo is shown on the field at AT&T Stadium before the Rose Bowl NCAA college football game between Notre Dame and Alabama in Arlington, Texas, Jan. 1, 2021. The university presidents who oversee the College Football Playoff voted Friday, Sept. 2, 2022, to expand the postseason model for determining a national champion from four to 12 teams no later than the 2026 season. (AP Photo/Roger Steinman, File)

DALLAS (AP) — In a meeting room just down the hall from where the plan for a 12-team College Football Playoff came to life almost 2 1/2 years ago, the conference commissioners who manage the postseason system finally began the next phase of expansion: implementation.

The 11-member management committee gathered Thursday for 4 1/2 hours at a hotel in the Dallas-Fort Worth Airport for the first time since their bosses voted last week to expand the CFP from four to 12 teams.

The frustrations and hard-feelings that hung over expansion talks most of last fall, and led to some icy gatherings, have seemingly been lifted. The goal is to sort through myriad issues and have a new format in place for the 2024 season.

It's unclear whether there is still time to accomplish that, but at least now everybody involved appears to be pulling in the same direction.

“It’s like when you wait in a long line,” American Athletic Conference Commissioner Mike Aresco said. "You finally get there, and you kind of forget about the long wait.”

Among the critical items that need to be sorted out to transform the playoff in two years are media rights, revenue sharing and working with and around existing contracts with ESPN and bowl partners.

“There are a lot of moving parts, a lot of pieces,” Mountain West Commissioner Craig Thompson said. ”It won’t be by lack of effort, whatever happens.”

But first they need to figure out where and when 11 playoff games can be played. Availability of venues and television time slots could ultimately determine whether early expansion is possible.

Last week, the university presidents and chancellors who oversee the CFP pushed forward expansion and directed the management committee to implement a 12-team model by 2026, but as soon as 2024 — if feasible.

“We looked at everything today,” Atlantic Coast Conference Commissioner Jim Phillips said. “'24, ‘25, ’26. So it’s kind of parceled together. But I’m optimistic.”

Early expansion for the 2024 and 2025 seasons appeared to be off the table in February after months of haggling among the commissioners failed to produce the necessary unanimous consensus.

The presidents had other ideas, but that lost time makes the task more difficult.

“We didn’t move down the road on details,” Southeastern Conference Commissioner Greg Sankey. “Well, now the good news is, the spirit is, ‘hey, we need to get after this.’ So attention is high. Prioritization is high.”

Sankey was part of the four-person subcommittee that began working on expansion in 2019. The group met here in February 2020 to hone in on the 12-team plan, but the pandemic put that on hold and it wasn't unveiled until June 2021.

The 12-team format calls for four first-round games played at or near campus sites about two weeks after conference championship games, typically held the first weekend of December.

Quarterfinals will be held at bowl sites on or around New Year's Day, followed by neutral site semifinals about a week later and a championship game in mid-January.

Last month, the CFP announced the sites for the 2024 and 2025 championship games based on a four-team model, another hurdle to changing the format.

A new format before 2026 would also mean going back to the bargaining table with ESPN, which pays about $470 million per year for the CFP, plus another $125 million in separate agreements with the Rose Bowl, Sugar Bowl and Orange Bowl.

Expansion for the final two years of the current 12-year deal that ends after the 2025 season is estimated to be worth an additional $450 million in net revenue to the conferences.

The estimated value of the television rights to a 12-team playoff beyond 2025 is about $2 billion per year.

A newcomer was welcomed to the management committee this week: Brett Yormark officially replaced Bob Bowlsby as Big 12 Commissioner in August.

Yormark said he spent most of Thursday's meeting asking questions.

He previously spent 14 years leading the company that manages Barclays Center and other sports and entertainment venues in New York. He said he didn't know the nuances of the CFP well enough to gauge how complicated early implementation will be.

But if all the stakeholders are on board, he said, that goes a long way.

“When an event’s worth it, you do what you need to do to execute it,” he said.