Cincinnati takes series lead in Battle for the Victory Bell 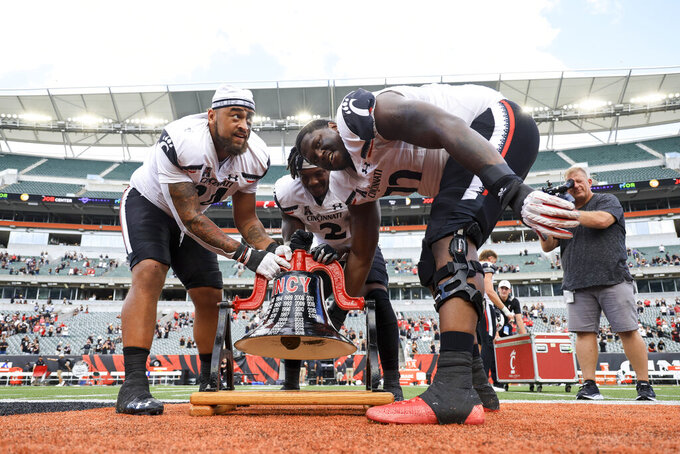 CINCINNATI (AP) — Ben Bryant threw for 337 yards and two touchdowns and Cincinnati scored 14 unanswered points in the second half to beat Miami (Ohio) 38-17 on Saturday for a series lead in the Battle for the Victory Bell.

The 126th Battle for the Victory Bell ended in coach Luke Fickell's 50th victory with the program. Cincinnati has won 16 straight against Miami to take its first lead in the series, 60-59-7, since 1915.

Bryant connected with Nick Mardner on a 10-yard pass to put the Bearcats ahead 24-17 with just 13 seconds left before halftime. Bryant found Tyler Scott in stride for a 41-yard touchdown with 9:03 left in the third.

Charles McClelland added 101 yards rushing and two touchdowns, the second coming late in the fourth, for Cincinnati (2-1). Corey Kiner also had a rushing score and 32 yards.

Aveon Smith passed for 116 yards and two touchdowns for Miami (1-2). He was intercepted one and sacked four times.