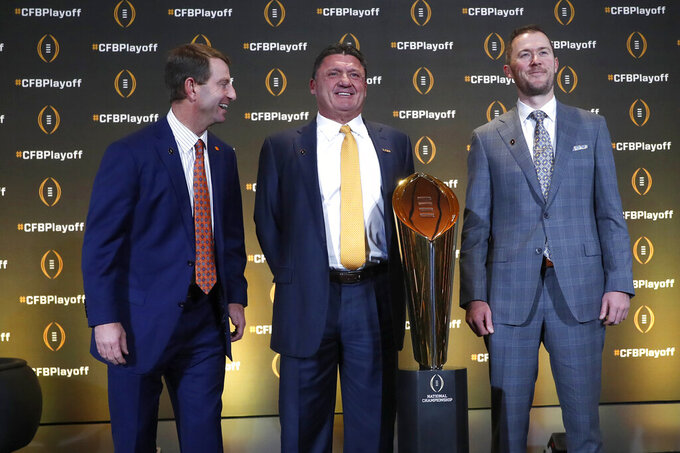 ATLANTA (AP) — A familiar face was missing as the coaches gathered Thursday at the College Football Hall of Fame to discuss the upcoming playoff.

So was a guy who was supposed to be there.

For the first time since the playoff started in 2014, Nick Saban and the Alabama Crimson Tide won't be a part of it. Losses to LSU and Auburn finished off its chances of a sixth straight postseason appearance.

"They pack us in this little glass room for about 30 minutes before this," Oklahoma coach Lincoln Riley said. “To walk in there and not see him was certainly a little strange.”

Riley had expected to see Ohio State coach Ryan Day, whose Buckeyes did claim a spot in the four-team field. But Day was a no-show because of travel issues that delayed his arrival into Atlanta, though he was expected to be on hand for the college football awards show that brought many of the game's biggest names to the glitzy venue overlooking Centennial Olympic Park.

Clemson's Dabo Swinney noted the empty seat beside him — meant for Day — when asked about Saban's absence.

"We saved a seat for him," the Clemson coach quipped. "He'll be back. Don't fret for coach Saban. He's the best to ever do it. He has an unbelievable program. He had a couple of tough games this year, but he'll be back. It's a little odd not to see him here, that's for sure. But I don't think he'll be gone very long."

His Oklahoma counterpart nodded in agreement.

But that's for another year.

This playoff is hardly lacking for experienced postseason coaches.

Swinney's Tigers have made the field five out of six years, with a pair of national championships including the most recent one.

This is the third straight playoff appearance for Riley and fourth overall for the Sooners, though they have yet to advance past the semifinals.

The newcomers are Day, in his first season as Ohio State's coach, and LSU's Ed Orgeron.

No. 1 LSU (13-0) won the Southeastern Conference championship to earn the top seed in the playoff, setting up a Peach Bowl showdown against No. 4 Oklahoma (12-1), the Big 12 winner and only playoff team with a loss on its record.

LSU is the only team making its playoff debut. The Buckeyes got in twice under previous coach Urban Meyer, winning the first national title under the four-team format during the 2014 season.

For LSU and Heisman Trophy favorite Joe Burrow, the Peach Bowl will mark a return to the city where the Tigers blew out Georgia 37-10 in the SEC title game last weekend.

"Obviously, there will be a familiarity with the dome," Orgeron said, referring to nearby Mercedes-Benz Stadium. "The guys will be staying in the same hotel. I think they'll feel comfortable. But that won't matter come game time."

For Oklahoma, this is a chance to finally break through for a shot at its first national title since the 2000 season.

The Sooners lost to Clemson in the 2015 semifinals under previous coach Bob Stoops. They were knocked out the last two years with Riley at the helm, falling to Georgia in a Rose Bowl thriller and Alabama in the Orange Bowl.

When each coach was asked one word to describe their teams, Riley's choice wasn't surprising.

"Hungry," he said. "There was a very strong desire to put themselves in position to accomplish the things they felt like they could."

Clemson has won 28 straight games since a 24-6 setback to Alabama in the Sugar Bowl semifinal during the 2017 season. The No. 3 Tigers (13-0) will face Big Ten champion and second-ranked Ohio State (13-0) in the Fiesta Bowl — the second half of the Dec. 28 semifinal doubleheader.

Swinney also had an appropriate word to describe his team, though the talkative coach couldn't stop there, of course.

"Focused," he said. "They've really been focused. They've been an easy group to coach, to prepare. Every single week, they've been focused on trying to get the job done. They've not wavered all year long. I'm super proud of them."

When it came time for Orgeron's one-word description, he kept it short and sweet.

After a few seconds of awkward silence, laughter broke out in the room.

"Hey, you said one word," Orgeron added with a big grin.