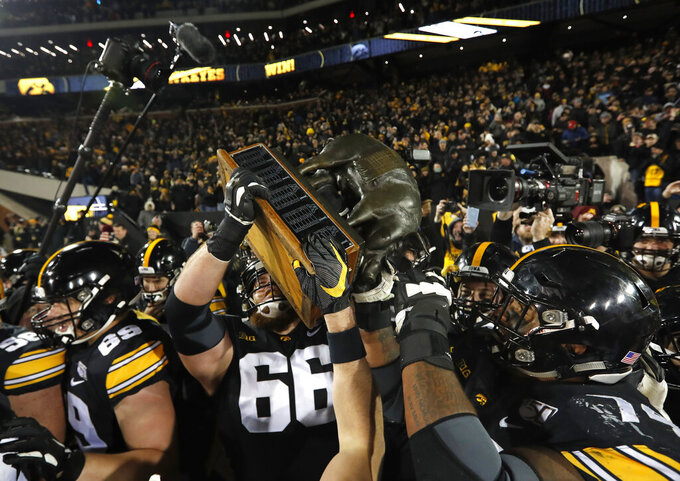 Iowa carries off the Floyd of Rosedale Trophy off the field while surrounded by fans after defeating Minnesota in an NCAA college football game, Saturday, Nov. 16, 2019, in Iowa City, Iowa.(AP Photo/Matthew Putney)

MINNEAPOLIS (AP) — The next edition of the Iowa-Minnesota rivalry will be staged on a Friday night.

Minnesota announced Friday that the Big Ten has moved the 2020 game at TCF Bank Stadium up by one day, from Sept. 20 to Sept. 19. Iowa won at Kinnick Stadium this year, 23-19, maintaining possession of the Floyd of Rosedale bronze pig trophy for the fifth straight season.

This will be the earliest meeting between the two schools. In 113 all-time matchups, the Hawkeyes and Gophers have only played in September twice, in 2012 and 2013. Iowa leads the series 63-48-2.

The Big Ten began scheduling Friday night games in 2017. Minnesota hosted one in 2018, a victory over Indiana.