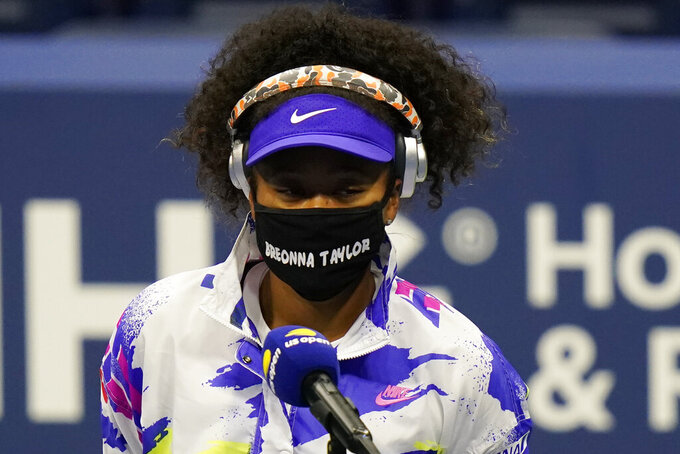 Naomi Osaka, of Japan, wears a mask in honor of Breonna Taylor before her match against Misaki Doi, of Japan, during the first round of the US Open tennis championships, Monday, Aug. 31, 2020, in New York. (AP Photo/Frank Franklin II)

The Preakness Stakes will be run at Pimlico Race Course in Baltimore Oct. 3 without fans, making it a spectator-free sweep of the three Triple Crown races this year because of the global coronavirus pandemic.

After all three were postponed and then rescheduled out of order, the Belmont Stakes took place without fans June 20 in New York. Churchill Downs originally moved the Kentucky Derby to this Saturday hoping fans could attend but adjusted to limited attendance and then none.

Belinda Stronach, chairman and president of the Stronach Group that owns and manages Pimlico, said company and Maryland Jockey Club officails had been working closely with Maryland state and local health officials to set a plan for the Preakness. The decision was ultimately made to limit race day to essential personnel only.

Fans who already bought tickets can transfer them to the 2021 Preakness or get a full refund.

Virginia Tech coach Justin Fuente says the number of positive COVID-19 tests among his players has increased since students returned to campus and hybrid online and in-person classes started.

The school has not released data about athletes but posts updates on its web site. The latest, through Aug. 30, says there have been 178 positive tests among students and employees, with more than 10,000 tests administered since Aug. 9.

Fuente said "It’s just part of the deal” on a Zoom call with reporters.

The Hokies are scheduled to open their season at home against rival Virginia on Sept. 19. Their original opener, slated for Sept. 12 against North Carolina State, was pushed back two weeks after an outbreak of the coronavirus at N.C. State.

Iowa State now says it will not allow fans to attend the Cyclones’ opener against Louisiana-Lafayette in Ames on Sept. 12.

Athletic director Jamie Pollard had announced Tuesday that up to 25,000 fans would be allowed in Jack Trice Stadium.

Pollard said university president Wendy Wintersteen decided to reverse the decision based on feedback she had received from the community.

Pollard said what happens going forward will depend on how the community responds to a recent surge in positive COVID cases.

The New York Times last weekend reported that Ames had the most cases of COVID-19 in relation to population the previous two weeks. Ames, with a population of 98,000, had 956 cases.

Wake Forest says its Sept. 26 football game against No. 10 Notre Dame will move from Charlotte, North Carolina, to the Demon Deacons’ home field in Winston-Salem.

The school announced the move Wednesday. A day earlier, the school said it would not host fans to open the football and other fall sports seasons for home competitions amid the coronavirus pandemic.

At the time, that affected only one football game: the Sept. 12 opener against top-ranked Clemson. Notre Dame’s visit two weeks later will give the Demon Deacons a second home game in September, though the school says it doesn’t anticipate being able to host fans for that game, either.

In a statement, athletic director John Currie says the school was excited to play in Charlotte in front of a “vibrant” fan base roughly 80 miles from campus in the home stadium of the NFL’s Carolina Panthers. The school is allowing ticket holders for the Charlotte game to receive a refund, roll the cost over toward next season or transition the purchase to a contribution to support Wake Forest athletics.

Italy midfielder Jorginho has been cleared to train with the national team after joining the squad three days late because of concerns about exposure to the coronavirus with Chelsea.

The Italian soccer federation says a virus test for Jorginho came back negative.

Brescia midfielder Sandro Tonali was dropped from the team list after he was placed in isolation by his club for potential exposure to COVID-19.

Italy hosts Bosnia-Herzegovina on Friday and then visits the Netherlands three days later in the Nations League.

Winger Federico Bernardeschi was sent home with a muscular injury.

This month’s road cycling world championships have been moved to Imola, Italy, after Swiss host Aigle-Martigny backed out because of a government ruling limiting mass gatherings amid the coronavirus pandemic.

The revised event from Sept. 24-27 will feature only elite men’s and women’s categories. Junior and under-23 races have been cut from the program.

Some European basketball club competitions have been rescheduled because of various coronavirus restrictions on the continent.

The regular season of the Europe Cup is now scheduled to begin in January. FIBA had hoped to start the second-tier competition by October.

FIBA also says the EuroCup women’s qualifying rounds have been pushed back to December. The regular season is scheduled to begin in January.

FIBA still hopes to start its women’s EuroLeague on time with the regular season scheduled to begin in mid-October.

The FIBA Europe board will next meet in October and will discuss holding its competitions in single-venue “bubbles.”