No. 1 Alabama set to host Southern Miss in between SEC games 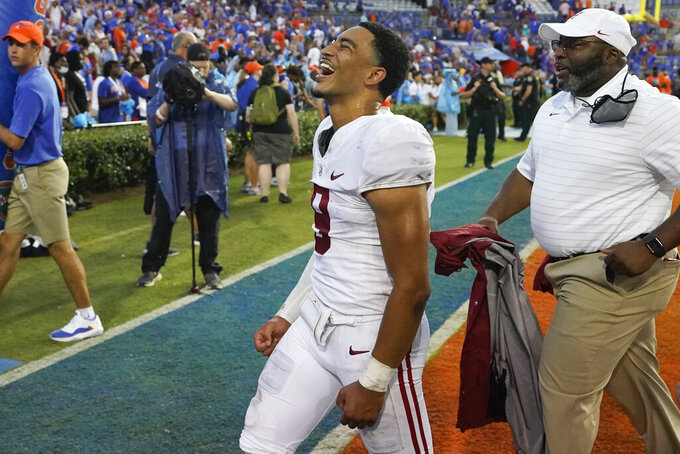 Alabama is getting ready to face a team from Mississippi in Tuscaloosa, just not the one that fans are most anticipating.

First things first. Looking ahead is not allowed in Nick Saban's world even — or especially — against 44.5-point underdogs like the Golden Eagles (1-2).

“We need to play to our standard,” Saban said. “We need to do the things that we do well.”

Alabama survived for a 31-29 win at No. 11 Florida in its first major test of the season. Saban and his team are hoping they can build on that close call and meet that lofty standard of execution and focus.

“So far this week, the message we’ve got is just to return back to our standard of Alabama football,” safety DeMarcco Hellams said. “Just become a defense and a team that we know we can be, and just putting that game behind us and moving on.”

Southern Miss is led by first-year head coach Will Hall, a former quarterback at North Alabama and head coach at West Alabama, not far from Tuscaloosa.

“It was a 45-minute drive, so I’ve spent many, many a day in those offices,” Hall said. “We pattern much of everything we do like them. The way we build our program, quarterback centered through the defense, the way we practice is almost carbon copied off the way they practice. So, the way we’re building the program is very, very similar to the way they’ve built that there and off of his tree.”

Saban said tailback Brian Robinson is “day to day” with a rib injury suffered late in the Florida game.

Hall said he has started six freshmen at quarterback in his career so he's well acquainted with the situation.

“Offensively, we’ve got to get 11 guys doing their job,” the Southern Miss coach said. "We’re not doing a great job of doing that right now. We’re self-destructive in a lot of ways.”

Alabama pass rushers like Will Anderson Jr. and Phidarian Mathis have to get excited looking at the stat sheet from the Southern Miss-Troy game. The Golden Eagles allowed 16 tackles for loss and nine sacks. Tide defenders have combined for eight sacks, led by Mathis (2.5), but Anderson (one sack) is one of the nation's top linebackers.

Playing a complete game is still the goal for Alabama, despite already posting two lopsided wins and surviving a big challenge on the road. A popular theme for Saban has been playing “60 minutes.”

“Some way we’ve got to be able to sustain our performance,” the Tide coach said.

The Golden Eagles haven't allowed any of their first three opponents to reach 100 rushing yards. Alabama tailbacks Brian Robinson Jr. and Jase McClellan were held to 95 yards on 24 carries against Florida, but they and other backs like Trey Sanders would like to get the ground game going.

Southern Miss has only faced a single top-ranked opponent in the AP poll, losing to No. 1 Alabama 42-7 on Oct. 25, 1980. The Goldean Eagles’ last win in Tuscaloosa came in the finale for Tide coaching icon Bear Bryant in 1982.