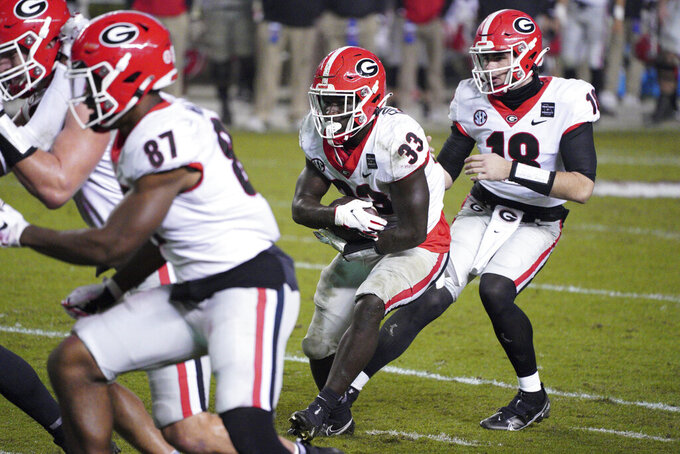 No. 12 Georgia and Missouri is the only SEC matchup of teams with winning records scheduled for this weekend. The Bulldogs (6-2) have won two straight since a loss to No. 6 Florida. They've been knocked from SEC East contention.

The Tigers (5-3) have won three straight and five of their last six, beating Arkansas 50-48 on a game-ending 32-yard field goal freshman Harrison Mevis.

With a win, they'd move into a second-place tie in the division with the Bulldogs under first-year coach Eliah Drinkwitz.

The Bulldogs have won the last six meetings. Their last trip to Columbia resulted in a 43-29 win, when Georgia scored touchdowns both on special teams and defense in the first half.

Florida's nation-leading passing offense against LSU's awful pass defense. Led by QB Kyle Trask, the Gators are averaging 376.7 passing yards per game with an array of weapons led by tight end Kyle Pitts. The Tigers were abused through the air by Alabama's Mac Jones and DeVonta Smith a week ago. They're 125th nationally in defending the pass, giving up a 313.1 yards on average. Trask is one of the leading Heisman Trophy candidates

No. 5 Texas A&M, hoping for a College Football Playoff berth, will be stuck watching the other contenders this weekend. The game with Mississippi has been called off because of COVID-19 issues within the Rebels program. Ole Miss has paused team activities until at least Friday. It won't be rescheduled barring another cancellation on Dec. 19. The Aggies are scheduled to visit Tennessee and Ole Miss would be at LSU.

Alabama receiver DeVonta Smith has caught 35 passes for 749 yards and 11 touchdowns over the last four games, all Tide records for a four-game stretch. ... Trask’s 38 touchdown passes for the Gators is tops in the nation by eight. Only Houston's Andre Ware (40 in 1989) and Hawaii’s Colt Brennan (39 in 2006) have thrown for more through nine games. ... Will Rogers needs 221 passing yards to break the Mississippi State freshman record of 1,532 set by Wayne Madkin in 1998. ... Alabama has won the last 13 meetings with the Bulldogs. ... Tennessee running back Eric Gray has averaged 1092. yards per game in his last nine outings dating back to last year.

Najee Harris, RB, Alabama: His terrific season gets overshadowed somewhat by the Tide's prolific passing game. But Harris leads the nation with 20 rushing touchdowns and his 115.3 yards per game is tops in the SEC. Ordinarily he would be getting Heisman buzz with those kind of numbers and he at least has the potential for another big game. Arkansas ranks 91st nationally in run defense, giving up 189.4 yards on the ground per game. ___