No. 12 Michigan poses big test for Hoosiers in home finale 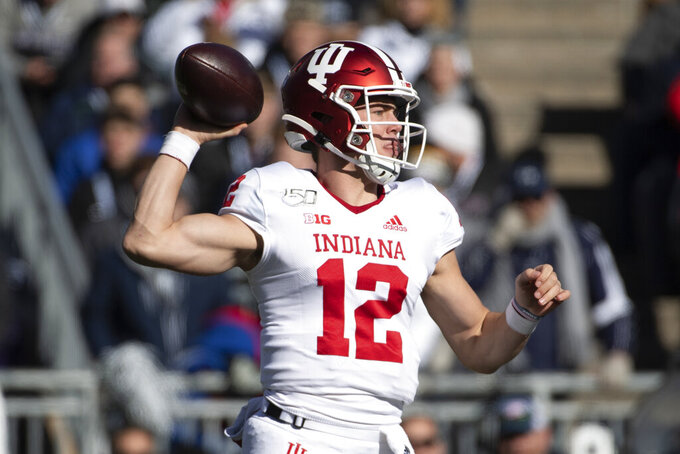 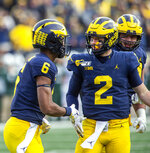 Quarterback Peyton Ramsey started this season as the backup.

He said and did all the right things and when he got another chance the two-year starter didn’t disappoint.

On Saturday, the newly-minted captain will close out the Hoosiers’ home slate as the starter on one of Indiana’s most successful teams — and with No. 12 Michigan in town, he said he is still not satisfied.

“It is one of our season goals,” Ramsey said when asked about beating a ranked team. “But it's also just another chance to go compete, to go play.”

And without Ramsey, the Hoosiers’ breakthrough season might not even have been a pipedream.

Injuries limited Michael Penix Jr. to six starts in a season he finished only two games. Ramsey, meanwhile, has gone 3-2 as the starter, the losses coming to Ohio State at home and Penn State on the road.

Ramsey’s ability to stay ready and perform on a moment’s notice has helped Indiana secure its first winning season since 2007, become bowl-eligible for the first time in three years, win at Nebraska for the first time since 1958 and end a 25-year drought by cracking the Top 25 rankings. The Hoosiers (7-3, 4-3 Big Ten) were even within striking distance of snapping a 37-game losing streak against top 10 foes last weekend.

Now, Ramsey will try to end a 23-game skid against surging Michigan (8-2, 5-2) and one of his biggest fans, Wolverines coach Jim Harbaugh.

“I’ve always though Ramsey was a terrific quarterback,” Harbaugh said. “We played against him as a true freshman and he played very well, and he’s a very experienced quarterback now.”

Michigan poses all sorts of problems.

The defense has allowed just 228 yards and 11.4 points in its last seven games, six of them wins. The offense has topped the 400-yard mark four times in its last five games and after beating one rival, Michigan State, the Wolverines hope to continue building momentum for next week’s big showdown with No. 2 Ohio State.

Ramsey understands the challenge, but the Hoosiers are counting on their resilient quarterback to get the job done one more time.

“He's always been accurate, he's always been tough, he's always had those things that, those qualities of just the grit and the savviness,” Indiana coach Tom Allen said. “I just think he's a really good player and that's why it was such a tough decision in the beginning that we had to make, but he's proven to me that he's an excellent football player and he's playing at a high level.”

Sixteen seniors will make their final home appearance for the Hoosiers on Saturday and they are particularly excited about the bowl bid.

“We were the last class before coach Allen got here, but I think we were here long enough to embrace his concept,” senior offensive lineman Simon Stepaniak said. “I think this group really kicked it off and made sure you're not going to take Indiana lightly anymore.”

Harbaugh said Allen has done a “great job” with his program, improving the defense to complement its offense

“He’s got a lot of enthusiasm,” Harbaugh said. “He’s really focused, you can tell, as a coach and I think that rubs off on his football team.”

This series has been one-sided right from the start. Michigan won the first five games and the Hoosiers have never come close to pulling even with the Wolverines.

The Hoosiers haven’t won since 1987, but Indiana has been getting increasingly more competitive. Four of the last eight games have been decided by seven or fewer points and the Wolverines needed overtime to win in their last trip to Bloomington and double overtime in their previous trip to Bloomington.

“You can’t plant potatoes one day and expect to eat potato salad the next day.” — Harbaugh, referring to his steadily improving team.